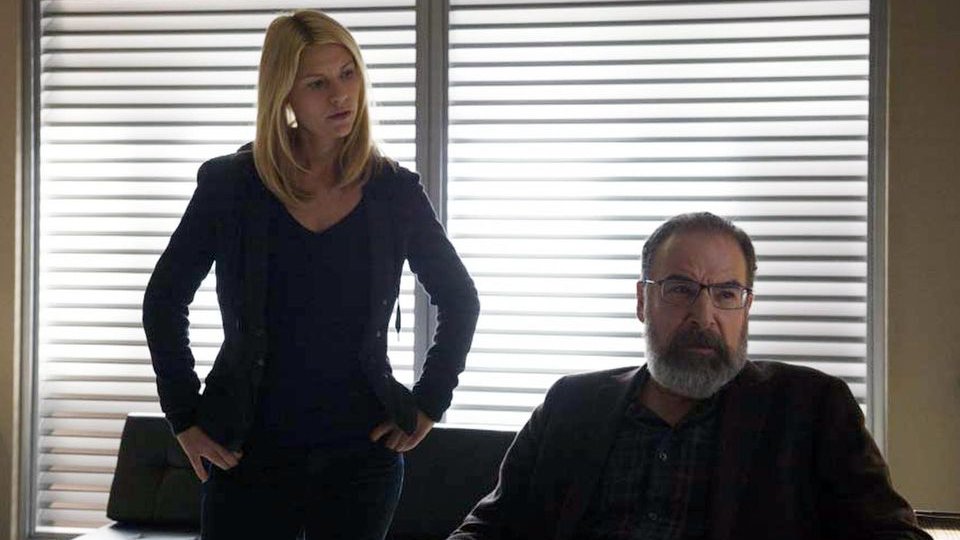 In Episode 8 Carrie (Claire Danes) worked out that Allison (Miranda Otto) was the traitor at the CIA. Saul (Mandy Patinkin) went on the run and Quinn (Rupert Friend) got himself into trouble with the Jihadist group.

In Episode 9 Carrie was dropped off at the safe house where Saul was staying by his Israeli friend Etai. Before she went inside he told her that she had broken Saul’s heart when she opposed his directorship. Once inside the emotion of the meeting was too much for both of them. Carrie almost broke down and they held each other in a long embrace before discussing business.

Carrie explained her suspicions that Allison was the traitor but Saul found it hard to believe. Having been close to Allison he tried to make excuses for Carrie’s accusations but she told him that it would be wrong to ignore them in case she was right.

Their next move was to meet with Astrid and the BND. They discussed the situation and how they might be able to trap Allison. The Germans would provide surveillance while Saul decided he would go to her one last time and attempt to hack her phone and place tracking and listening bugs in her handbag.

He turned up at Allison’s place unannounced and explained he was there to say goodbye as he would leave for Tel Aviv in the morning. She wasn’t convinced but went along with it fishing for info. Saul stayed the night and when she was asleep he crept downstairs to hack her phone and hid the bugs in her handbag as planned.

Next the BND met with Allison and Dar with a made up story of a defector who wanted to join the Americans in exchange for information. The plan was that it would spook Allison and after the meeting it looked like it worked.

She ran off to an empty room where she sent a text message which appeared to be a special code. Later that evening Carrie, Saul and the BND spied on Allison hoping that she would be meeting her handler. Instead a guy came round to her place and Saul left disgusted and embarrassed as they got intimate.

Carrie tried to comfort Saul but he was angry and agreed they should ‘up the ante’. So the next day Astrid approached Allison saying that they needed quicker turn around on the defector and that he was to given them information about a leak in the CIA that evening.

Immediately after Astrid left, Allison booked a first class train ticket and then made a secret phone call. She then jumped in a taxi to the train station, on the way she disabled her phone SIM card. At the station she disposed of her handset and then boarded a train but before it left she jumped out, crossed the platform and boarded a different one.

The BND continued to track her via satellite thanks to the bug in her handbag and used a drone for surveillance. Confident she hadn’t been followed Allison left the train at one of its stops. Next she went to a car that had keys hidden under the back wheel arch. She then drove the car to a Russian safehouse where Ivan was waiting.

Carrie wanted to raid them straight away but Saul needed more proof first. However the Germans could identify Ivan via their drone so Saul gave the go ahead for a raid on the premises. Inside Ivan and Allison had an angry exchange before she slapped him and told him to listen.

The pair were arrested and taken back for interrogation. Dar had a brief meeting with Saul and Carrie before going to question Allison. She’s really sneaky though and had concocted a story that Ivan had been giving her intelligence for 12 years. She was able to use all the information available to her and turn it against Saul and Carrie in a believable way.

Elsewhere this episode we caught up with Quinn. He arrived back in Berlin bound in the back of the Jihadi’s van with the chemical weapons. Once at their destination they took him inside, chained him up and bound him with yet more gaffer tape.

Quinn has worked out that the Jihadi’s plan to use the chemicals to make Sarin gas. The captor tasked with looking after him is named Qasim and Quinn notices that he seems more timid than the others. He gets to work on making him doubt their plans and tells him about the Sarin and tells him to Google a particular strike in Syria.

Qasim does so and understands how lethal it will be. He takes a look around their complex and notices they have been building a test chamber. Suddenly their reason for keeping Quinn becomes clear. They are going to film him in the chamber while they fill it with Sarin. They then plan to release the footage as propoganda to try and persuade the West to stay out of Syria.

He also spotted some Atropine and is told that it can be used to lessen the effects of the gas, potentially saving the life of someone who is exposed. At night Qasim takes a sneak around the complex after Quinn urges him to dispose of the chemicals and flee.

At the end of the episode the Jihadi’s come for Quinn as it’s time to test the gas on him. On the way Qasim stopped them briefly and signalled to Quinn to try and run. Still bound he had no chance of escape but during the commotion Qasim injected him with Atropine in the hope it will keep him alive.

The episode ended on a cliffhanger as Quinn began to feel the effects of the gas. He started shaking violently and foaming at the mouth before collapsing. Will Quinn survive the ordeal? We certainly hope so.

The tenth episode of the season is New Normal. Allison finds herself being interrogated. Meanwhile, Carrie and Astrid decide to search for Quinn.

Tune in to Channel 4 at 9pm on Sundays to watch Homeland Season 5. Preview episode 10 with our gallery below: