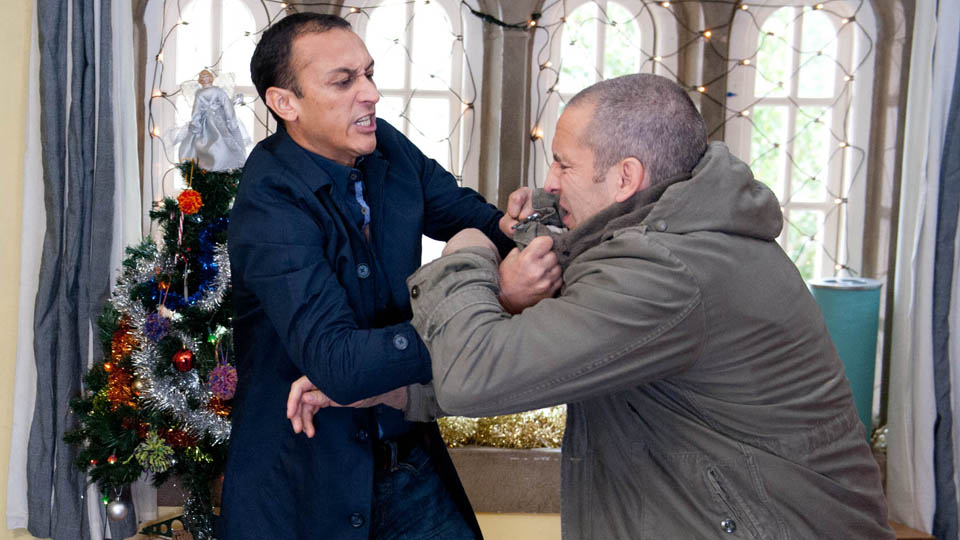 Let’s have a look at what’s in store for the residents of Emmerdale this week.  Has karma come around for Sharma?  Will Paddy need to vet his texts?  Read on to find out more…

Sam gives Jai a taste of his own medicine

Megan fears it won’t be long til Jai and everyone else knows she’s pregnant after Brenda discovers her secret.  She’s grateful once again to Nikhil who offers his support.  Little do either know that Jai watches angrily from a distance, annoyed at the pair spending time together.  He questions Sam about Nikhil and Megan’s relationship and realises that Sam has feelings for Megan and enjoys taunting him.

Nikhil offers  Leyla a zero interest loan in order to buy Megan out of her business.  Leyla is thrilled and it seems the pair are getting more friendly by the day.  Nikhil hands Megan the money and she gives him a hug of gratitude, that is interrupted by Sam who jealously heads to the pub and rubs Jai’s nose in what he just saw.  Jai heads straight round to the cottage and what he sees makes the penny finally drop.

When Jai pays Sam a visit, Sam is ashen and realises Jai must know Megan is pregnant.  Sam cowers as Jai keeps coming at him and he accidentally lets slip that Megan is leaving.  The pair end up in a scuffle and in self-denfence Sam knocks Jai out by hitting him over the head with a doorstop.  As Jai lies motionless, Sam stands over him in shock.

It seems like karma has come and bit Jai on the bum as the next time we see him is when Sam approaches a container in the middle of a field and we see Jai bound and gagged.  Sound familiar?  A furious Jai, demands to be released, but Sam refuses and lies that Megan has already left the village.  As Jai’s threats keep coming, can Sam hold his resolve or will Jai manage to escape?

Megan is in the pub saying her goodbyes, while Sam is relieved that Jai hasn’t got to her in time.  Nikhil and the rest of the Sharmas haven’t been able to locate Jai and start to wonder if he doesn’t want to be found.  However, Jai does make it back to the village and with terrible consequences.

Rhona sees a saucy text from Tess to Paddy

Paddy was playing with fire when he left the adoption meeting to go and see if Tess was pregnant (she wasn’t!) and Rhona is still fuming with him.  Paddy told her he was going to meet Aaron who really needed his help, so when she sees Aaron in the shop she presses him for details.  Aaron has to think on his feet to cover up for Paddy and he’s not happy about it.

Meanwhile, back at the Vets, Paddy is arguing with Vanessa and accidentally reveals Rhona’s previous drug addiction to the Social Worker.  As he quickly tries to backtrack, Rhona arrives and is completely thrown when the Social Worker questions whether or not she can be trusted.  What will this mean for their adoption hopes?

All the drama sends Paddy straight to the arms of Tess and when he arrives back to the village, Rhona gives him a frosty reception and mistakenly picks up his mobile as she stomps off to a job.  When Paddy realises he goes in to a full panic.   Luckily, Rhona comes back when she sees what she’s done, but just as she’s about to hand over the phone a saucy text from Tess comes through.  How is Paddy going to talk his way out of this one?

Ashley hiding his dementia from his loved ones is starting to have an impact.  Bob has to lie to Brenda as to why Ashley would buy pantomime tickets for the kids, Laurel is left Ashley-less when she goes to an AA presentation and Harriet knows he’s hiding something.

Brenda asks Harriet to do some digging and find out what Bob and Ashley are up to not knowing the pair have gone to the hospital for Ashley’s appointment.  As the pair sit in the waiting room, Ashley’s heart breaks when he sees an old man who doesn’t recognise his own son.  He decides he definitely can’t put Harriet through watching him deteriorate and vows not to tell her.

Meanwhile, Harriet has called in a favour and had Bob’s car tracked to Hotten General and tells Brenda who puts Bob under pressure when he returns.

Sandy is suspicious that Laurel might be falling for Ashley again and challenges her about her feelings.  She insists he’s wrong but later she discusses the conversation with her dad and starts to think maybe she does have feelings for him after all.  Either way, she’s not about to destroy what he has with Harriet.

As Bob’s birthday comes around, a treasure hunt is arranged.  Out on the hunt, Ashley suffers a blackout and stumbles unaware that he is actually having a mini-stroke.  When Bob realises Ashley hasn’t returned he starts to worry and is about to tell Harriet the truth when he walks in and lies that he was called away on parish business.  When Bob hears what really happens he’s appalled and says he can no longer keep the secret.

Later, Harriet reveals to Laurel that she’s going to propose to Ashley.

Debbie tries to help Sarah and Ross bond by leaving them alone together to make cupcakes.  Things don’t go quite according to plan.

Debbie also warns Emma that she’ll never look after Moses but will she find a way?

April tells Carly she’s asked Santa to bring Marlon a girlfriend for Christmas, much to his embarrassment!

Joanie lands a job at the factory.