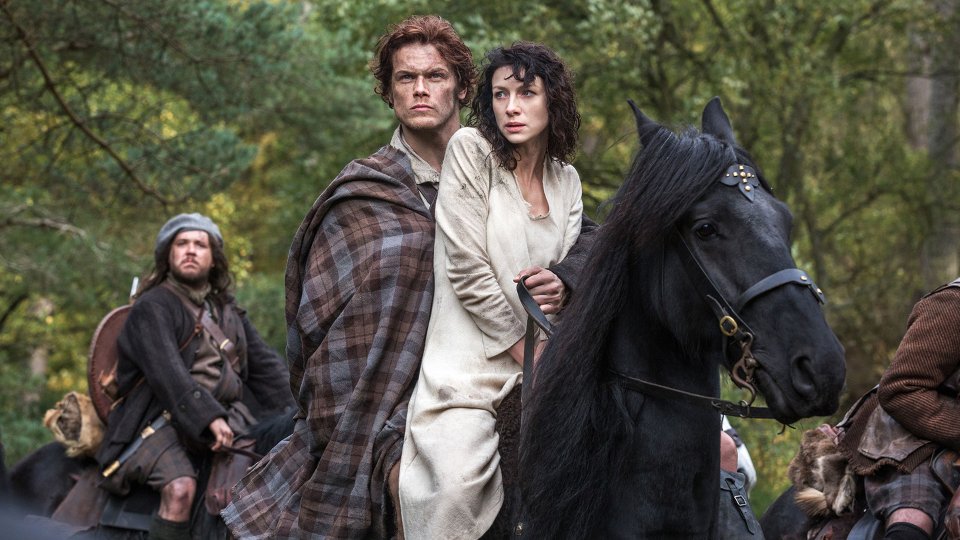 Married World War II nurse Claire Randall (Caitriona Balfe) visits Inverness with her husband Frank (Tobias Menzies). One day she explores the standing stones at Craigh na Dun and passes out. When she awakes she has been transported by in time from 1945 to 1743 where she becomes a prisoner of Clan MacKenzie, who believe her to be deceiving them about her true identity. There she meets Highland warrior Jamie Fraser (Sam Heughan) who she starts to form a friendship with and he begins to protect her from both the men in the clan and the Red Coats led by Captain Jonathan ‘Black Jack’ Randall (Tobias Menzies) who is a double for her husband. As Claire tries to find her way back to 1945, she becomes embroiled in the Clan MacKenzie’s attempts to collect funds for the Jacobite army and is targeted by Randall.

Outlander: The Complete Season One is based on the popular historical time travel novels by Diana Gabaldon. The series has been created by Ronald D. Moore (Battlestar Galactica) and has become a worldwide hit with both viewers and critics. Over the course of the first season Outlander manages to mix a variety of genres including sci-fi, romance and drama to create a rather unique show unlike anything else currently on TV. The show is loosely based on actual historical events and one of the things that we liked is how Claire has knowledge about what’s to come that the other characters don’t. She uses that wisely to protect her position in the clan that is keeping her prisoner and works it to her advantage.

The strong performances of Caitriona Balfe and Sam Heughan are one of the main reasons that fans of the show love it so much. Balfe is perfectly cast as the bolshy Claire who tries to keep the men around her in check whilst hiding the truth about who she really is. At first her arrival has people believing she may be some kind of witch due to her advanced medical knowledge and she quickly rubs a lot of people up the wrong way. Heughan on the other hand complements Balfe’s performance as the selfless Jamie. As the season progresses you learn more about his backstory and some of the things the character goes through in order to protect Claire are difficult to watch. Balfe and Heughan have a fantastic chemistry and you root for the both of them throughout the first season.

The Blu-ray release of the first season is absolutely packed with extras. There are podcasts on every episode, a wealth of deleted scenes, and 10 featurettes exploring the characters, the making of the show and the actor show play the main characters. You’ll be kept entertained long after you’ve worked your way through the season’s 16 episodes.

Outlander: The Complete Season One is a really engrossing period drama with plenty of twists and turns, and more than a few shocks. It may take a few episodes to get into the swing of it but believe us when we say it’s definitely worth sticking with. The tones of the show shifts from light to dark pretty quickly and there are times when it’s downright bleak. If you’re looking for a good, gritty drama for the winter season then Outlander is the perfect choice for you.