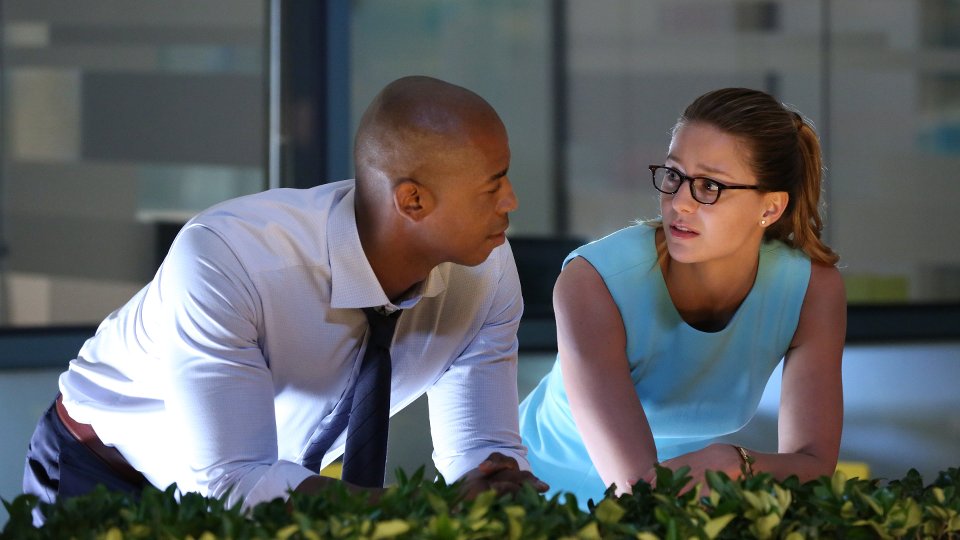 Supergirl arrived in the UK tonight following it’s strong debut in the US earlier this week.

The show wasted no time in establishing Kara Zor-El’s (Melissa Benoist) backstory as we learned that she was sent to earth by her mother Alura (Laura Benanti) to protect her cousin Kal-El aka Superman. On her way to Earth she was trapped in the Phantom Zone for 24 years before landing on Earth having not aged a day. Superman delivered her to the Danvers family where she grew up alongside her new sister Alex (Chyler Leigh).

In the present day Kara was flying under the radar working for Cat Grant (Calista Flockhart) but when the plane Alex was on almost crashed, Kara saved the day but brought a lot of media attention with her. Alex tried to discourage Kara from following her hero’s destiny but she refused to listen instead revealing her identity to colleague Winn (Jeremy Jordan).

Kara’s attempts to save her city were brought to an abrupt pause when she was captured by the DEO (Department of Extra-Normal Operations) and it was revealed that her sister Alex worked there alongside Head of the DEO Hank Henshaw (David Harewood). Kara and Alex put aside their differences to team up and take down alien convict Vartox (Owain Yeoman).

At the end of the episode is was revealed that Kara’s aunt Astra (also played by Laura Benanti) was behind the attack and she was plotting to take over Earth. CatCo’s latest recruit Jimmy Olsen (Mechad Brooks) also revealed that he knew who Kara really is.

The next episode of the season is Stronger Together. When Kara’s attempts to help National City don’t go according to plan, she must put aside the doubts that she – and the city’s media – has about her abilities in order to capture an escapee from the Kryptonian prison, Fort Rozz. Also, Cat pressures James to use his connection to Superman to get her an interview with Supergirl.

Advertisement. Scroll to continue reading.
In this article:Supergirl