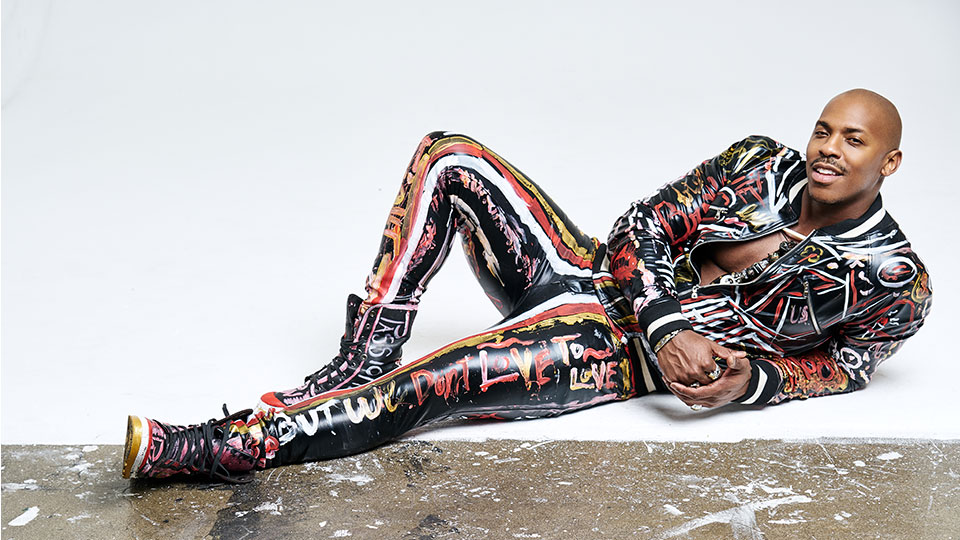 Over his career to date he’s had starring roles in shows such as Desperate Housewives and True Blood, and he’s branched out into music under the moniker KING GVPSV. Brooks recently released new single Oceans, his second new track since the arrival of his debut album May 20th.

I caught up with Mehcad to find out more about his music, talk about where his moniker came from, and to find out how he juggles music and acting.

Hi Mehcad. How are you doing and where does this email Q&A find you?

Grateful, thanks for asking. How does it find me? In my dining room in Vancouver on a beautiful spring day and if you like the things you read, you can find me at @mehcadbrooks.

You’ve released your new single Oceans under your KING GVPSV moniker. What’s the track all about and where did the inspiration come from?

“Oceans’” is about female empowerment and female independence, free of the opinions of men and how ever he may feel about how & what she uses her attributes for. I think the world that we live in right now is extremely shallow, however, is it truly my place to judge a woman who’s able to exploit that shallow culture for what she wants?

This is the second new track you’ve released since the release of your debut album May 20th last summer. Is an indication of what your next album might sound like?

I released a song called “Coupe Windows” in December. As far as how the next album is going to sound, I believe that artist should always be evolving their sounds I have an idea of what the next album should sound like, more dark R&B yet soulful, tribal and gypsy.

Most people perhaps know you best for your acting work so tell us more about how you got into music and found your voice.

My interest for acting started early. I was always the class clown entertaining people and as I got older I realized that people got paid for that. And while I mostly do drama, my roots are in comedy. I love making people smile and laugh.

However, on May 20th 2009 I died. I passed away. I crossed over to the other side. I saw all the things that people talk about, the light, waiting through a field of thick darkness yet knowing you’re in a loving harmonious oneness with the universe. I’ve seen it, I’ve felt it. I’ve tasted it, I understand what it means to disassociate yourself from who you’ve always thought you were and the body you thought was yours. And I guarantee you at the end of this beautiful journey, you are going to ask yourself the same question that I asked myself. Did I do what I agreed to do before I was born? Or did I just somehow allow my life to happen to me? The answer to that question for me was music.

On May 20th, 2011, I got hit by a car head on. She was going 65 miles p/hour, I was stopped at a stoplight. Next thing I know I was in a coma and I had a very similar experience and after I got out of that hospital I was ready to fulfil my agreement but it took a long time to heal. Then, on May 20th, 2012, I met a holy man who opened my eyes to a connection that these experiences kept reminding me of. He showed me a way to connect to that voice of oneness without having a traumatic experience invoke it. The next day, I began my music career and I never looked back. So what you hear in my music is me fulfilling an agreement before I was born but with the benefit, the pain and the passion that comes with overcoming very unique and traumatic experiences in life.

Why did you decide to go under the moniker KING GVPSV rather than release music under your name?

We all have kingdoms inside of us. I think the most difficult thing to do for most of us is to rule these kingdoms. Reign over yourself. Once you begin the work to rule your inner self, the outside world seems to fall in place. I’ve been on that path for a while, the path of protecting my space as strongly as a kingdom protects its borders. Protecting my crown chakra as strongly as a kingdom protects its throne and being as patriotic to my true self as one might be to their country. GVPSV comes from those that understand we don’t have to have a special home. With my May 20th experiences, I understand that YOU ARE your home. The body is a vessel for the soul. And if you are your home there is no place on this planet that you will feel out of place. So as a GVPSV, all of earth is your home, all the universe is your home. A GVPSV has no king and no need for a special home because they are always there.

Can we expect to see you playing any live dates soon and might you bring your music over to the UK?

Working on booking dates now, you’ll be sure to know when and I’ll post the dates on my social media pages: @mehcadbrooks & @kinggvpsv.

You’re currently starring on Supergirl as James Olsen. How have you found juggling working on that show with making music? Has it been a difficult balancing act?

Nothing is difficult if you really love it. People always ask me “how do you find the time?” It’s more of the mind that you find yourself and you make the time for what you love.

Your song Tears Away was used in Supergirl. How did that come about and what did it feel like to have your two worlds collide?

I asked…The squeaky wheel gets the grease. I’m of the mind that the worst that can happen when you ask for something is that people say no and then you’re right where you started which should be a great place. If you’re starting from a great place anyway ‘’No’’ just means not right now or not for this, it doesn’t mean never. It felt incredible to know that my show, the studio and the network were all supporting me and the fans loved it. And it’s a great song so everybody was happy to make it work. It’s a song about overcoming hardship so it fits into the Supergirl brand, so it wasn’t really a tough sell and I’m happy about that.

What influences would you say have helped to shape your music?

Every moment of my life has shaped the stories that I tell. Every song I have comes from a real place, my real life. I don’t know how to write music any other way.

I have a film that I can’t discuss at the moment. But that should be out by the end of 2019. It’s really good. A mystery/thriller. I’m writing a book, kind of a tell all, semi-autobiographical, quasi-manifesto, self-help book. And I just started stand-up comedy which has been amazing and soul fulfilling.