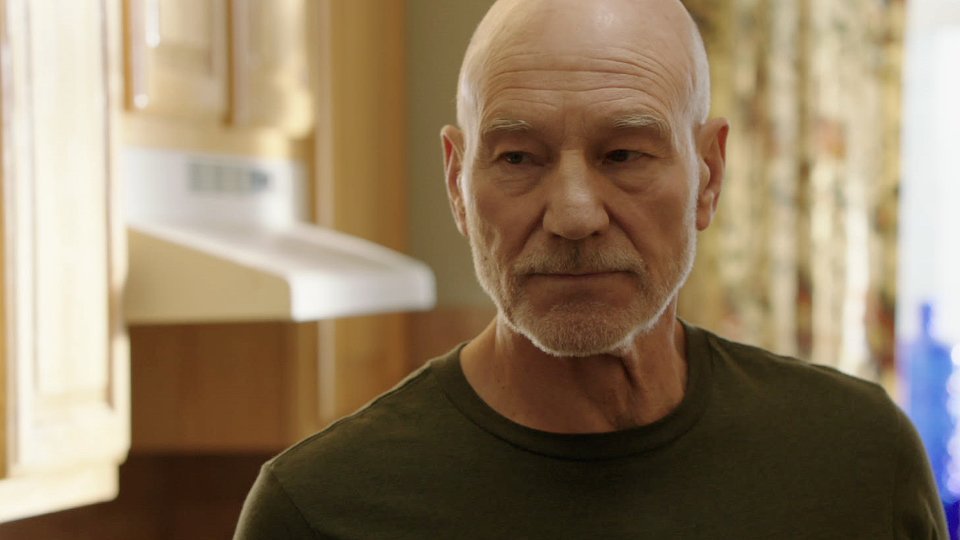 Dance teacher Tobi Powell (Patrick Stewart) is approached by Lisa (Carla Gugino) and her husband Mike (Matthew Lillard) to participate in an interview for a dissertation she is writing on the history of dance in 1960s New York. Starting the interview in a café, Tobi soon suggests that they all go back to his apartment to continue the conversation. As Lisa and Mike’s questions start to get personal and move outside of the original context, Tobi starts to suspect that the couple have orchestrated a meeting with him for a completely different reason.

Match is the second feature film from writer/director Stephen Belber. For the first half an hour you’re not entirely sure where the film is going to go. Tobi reels off his career and life fairly quickly and you’re left wondering how the film is going to fill the remaining hour. Once things move to his apartment the film takes a shift in tone as Tobi discovers the real reason that Lisa and Mike have made contact with him. We don’t want to give too much away as the revelation is fairly crucial and it would be a huge spoiler.

From the moment Lisa and Mike’s true intentions are revealed, the film turns into a rollercoaster of emotions. Both Lisa and Mike relate to Tobi in different ways but for Lisa it’s a real awakening and an opportunity to look at the parts of her life she’s not happy with. Her journey is an emotional one but one that’s she felt too stifled to embark on previously. Mike on the other hand has a lot of issues from his childhood and his way of dealing with those is aggression. He doesn’t see what’s in front of him and he ignores the issues that are affecting both Lisa and his marriage.

Tobi is caught in the middle of the situation and it’s clear he’s lived a very colourful bohemian life. He doesn’t get away from the encounter without confronting a few of his own demons too, especially when Mike continually pushes the question of his sexuality determined to get the answer he wants to hear. Lisa and Mike bring up painful memories for Tobi and by the film’s end there is a chance that it could be all for nothing.

Patrick Stewart gives a solid performance, as we’ve come to expect from him. He always brings real gravitas to any role he plays and he embraces every aspect of Tobi’s lively personality with gusto. It’s Carla Gugino though that steals the movie with her nuanced and emotive performance. She’s a bit of a revelation here and we had no idea she had such depth and range. It’s her that you side with throughout the movie and it’s her personal struggle that you really connect with. Also worthy of note is Matthew Lillard who turns in a surprisingly good performance. He doesn’t quite match his co-stars but it’s the best role we’ve seen him in since Scream.

Match is an intriguing, emotional and at times heart-breaking film. It deserves a much wider audience than it received and with the star power attached to it, we wouldn’t be surprised if it goes on to be one of those word-of-mouth classics. The issues the film deals with are handled well and realistically, and you genuinely care for the characters. Match is a wonderful ride that will leave you both emotionally exhausted and feeling a little warm and fuzzy.