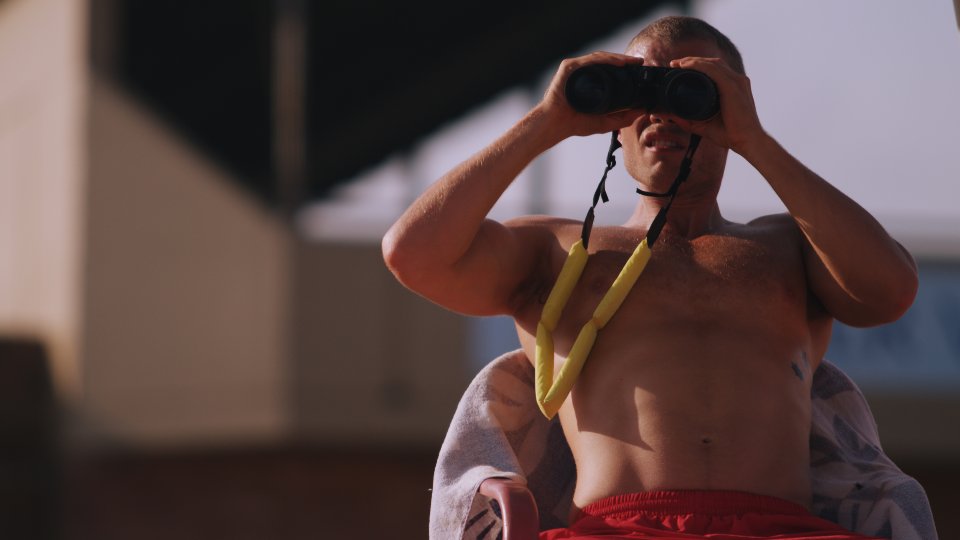 Phil (Jack Matthews) causes a stir when he starts working as a lifeguard and saves a young boy on his first day. His heroic save pushes upsets fellow lifeguard Len (Matt Levett) who was top dog in his team until Phil came along. Phil begins to outshine Len in every aspect and a tension quickly builds between the two, made even worse by the fact that an openly gay man is outdoing Len. On the surface Len makes it look like a healthy professional rivalry but soon things descend into violence when Phil makes Len question not only his professional prowess but also his sexuality.

Drown is the latest film by writer/director Dean Francis and is based on the play of the same name by Stephen Davis, who also co-wrote the screenplay for the film. The Australian drama quickly separates itself from other sexual identity crisis movies offering a realistic, gritty and at times hard to watch exploration of a man who is driven to violence as his only means of coping with his sexual desires. From the offset Len uses homophobia to deal with Phil arriving at the club and this only gets worse as Len struggles to fight his burgeoning lust for his new co-worker.

Caught in the middle of everything is Meat (Harry Cook), Len’s right-hand man with an impressive talent packaged in his pants. Meat lacks confidence and uses his friendship with Len to establish status in the club but his puppy-dog like adoration for his friend causes him to get caught up in the building drama. Things reach a head when the three men go out for a night of drinking that leads them around town and ultimately to a gay bar where the night takes a darker turn.

A strong central performance by Matt Levett is one of the things that elevates the film and really makes it standout. He’s capable of being thuggish, which Len is for a good portion of the film, but he also brings the pain and vulnerability to the fore too. Len is haunted by the death of a woman he failed to save and that exacerbates his sexuality struggle, which we learn is something he’s had to deal with from a young age. It’s hard to make a character like Len sympathetic but Levett does it. Jack Matthews as Phil and Harry Cook as Meat also turn in impressive performances. Matthews is pretty fearless, particularly during the film’s final act whereas Cook makes an impression as his character transforms over the course of the film’s events.

What we really liked about Drown was the way it really explores Len’s struggle. The events aren’t presented in black and white, and Len’s character is shown to be incredibly complex. The direction by Dean Francis provides an interesting take on a well-trodden story offering a new angle and a refreshing perspective. He gets strong performances from his cast and Drown is a film that will stay with you long after the credits roll. With a solid screenplay co-written with original playwright Stephen Davis, Drown is a superior addition to the LGBT genre that you should put on your watchlist immediately.

Watch the trailer for Drown below: