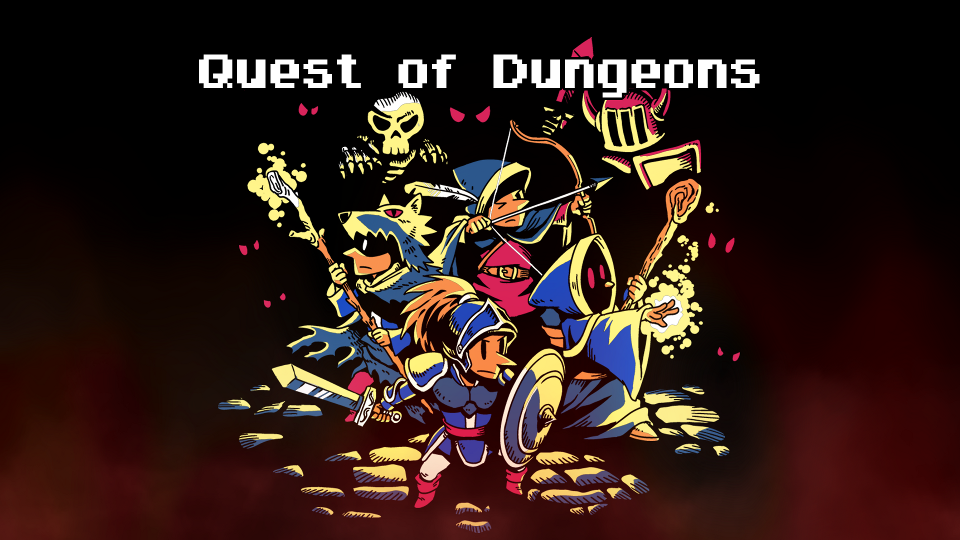 Quest of Dungeons is a turn-based dungeon crawler and roguelike in the style of a 16-bit game from Upfall Studios. Previously available on PC, iOS and Android the game has now come to Xbox One.

There’s a little story behind the game that an evil Dark Lord has stolen the light of the world and trapped it in a magic lantern. Naturally your quest is to head into his dungeons to defeat him.

Before you descend into the dungeons you must choose a character class – Warrior, Wizard, Assassin or Shaman. The Warrior is a melee fighter, Wizard is a ranged caster, Assassin is a ranged bowman and Shaman is a balanced class capable of melee and ranged attacks.

All characters start at level 1 and can earn experience points to level up by defeating the various nasties that lie in wait. Each class also has a health bar and the Wizard and Shaman get an extra bar for mana to cast spells.

Each class also has their own skill and they can also find books to learn new ones. You can only have one skill equipped at a time and there is a set number of turns cooldown before you can use it again.

Quest of Dungeons shows your health/mana bars in the top left corner of the screen and your experience bar along the top. If you want to do well it’s incredibly important that you keep an eye on these at all times because death is permanent. One really neat touch that helps a lot is that the triggers on the Xbox One controller vibrate slightly like a heartbeat when you get low on health.

Each time you die your character and progress is reset and you must begin the game again. This isn’t as bad as it sounds though thanks to the use of procedural generation for the levels and items. Pretty much everything is randomly generated so the layout of each dungeon, room as well as monster, NPC and item locations change each game.

This makes each game of Quest of Dungeons a new challenge and fresh experience. It’s a game you can keep coming back to and you’ll find new things each time. It’s not without its problems though as it is entirely possible for the game to generate an area that is simply too difficult for you. Thankfully this seems to be a rare occurrence.

Each action you take in Quest of Dungeons is classed as a turn. So every square you move, attack you make or item you use will increase the turn counter. Each turn you take results in one turn for the monsters.

The majority of the monsters can be killed with a few hits but you need to keep in mind which character you are playing with. The ranged classes should try and take the majority of monsters out before they get close as their melee attacks are weaker.

It’s also worth opening a door and then backing out of a room. This allows you to use the doorway as a choke point so you can take on one monster at a time. It also lets you shut the door to stop yourself from getting overwhelmed.

Staying alive in Quest of Dungeons is hard and you’ll die often. It’s not just the monsters who have it in for you either, pretty much everything in the dungeons can be dangerous. For example that patterned tile on the floor might trigger a wave of monsters, or that statue you just smashed in the hope of delicious loot could be booby-trapped.

Killing monsters and smashing stuff up results in loot. Loot can be gold, gems, weapons, armour pieces, skill books or food. Weapons and armour are hard to come by and it’s essential that you use the best that you have. Gems and unused items can be sold to merchants, that you’ll discover in the dungeons, for gold. Once you have plenty of gold things get a little easier as you can stock up on food and potions.

Keeping your health topped up is hard and you only begin with a couple of potions and chicken legs. There are plenty of health items to be found but it’s also easy to use them up. If you’re close to levelling up it’s best to save your items if you can as a new level grants a full health bar.

Health and mana also regenerates over time so you can heal yourself just by running around. It does take time but it becomes an essential tactic. If you find yourself faced with a tiny amount of health and a monster right next to you then it’s worth running about to top up before you go for an attack.

Scattered around the dungeons are magic stones that grant you quests. When you find a quest it is added to your log and it gives you hints as to where you need to go and what you need to do. A quest might be to find a particular item or kill a powerful enemy. Certain chests and doors that you come across require specific keys to open them. These can be found by exploring or purchased at the merchants.

Some dungeon rooms also contain bosses to fight and defeat. These are the hardest fights in the game and you need to ensure you show up prepared. Taking on a boss without weapon and armour upgrades or a stack of potions is the best way to an early grave. It’s often best to shut the door and come back later. Killing the bosses gives you the best rewards.

Quest of Dungeons is a lot of fun that is sure to please fans of dungeon crawlers and roguelikes. It’s a simple game to learn and play but hard to master. A game can be over in a few short minutes but each time you die you’ll just want to jump back in for one more go.

In this article:David Amador, Quest of Dungeons, Upfall Studios, Xbox One