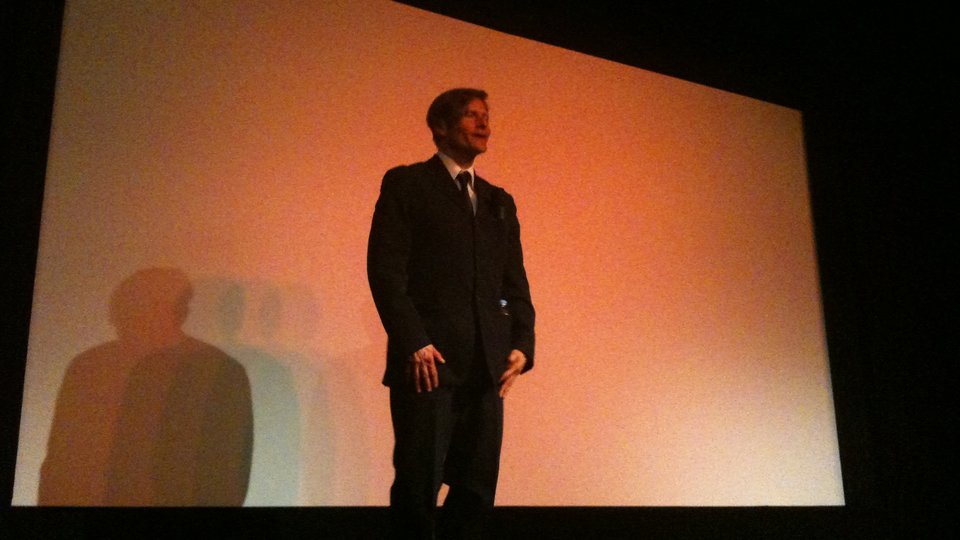 Crispin Glover, best known for playing George McFly in Back to the Future, was at The Institute of Contemporary Arts last night (Aug 25th) in London for an immersive evening of art and discussion.

Glover, now aged 51 but not looking a day older than when he walked off the BTTF set, delivered a truly unforgettable night. A sell-out crowd was treated to an entire evening of insightful recollection and performance from a man who clearly loves his craft.

Crispin Glover began the evening with a one-man performance of ‘Crispin Hellion Glover’s Big Slide Show’, a one hour dramatic narration of eight different, profusely illustrated books which he has penned. The images from the books were projected behind him during his performance and it was a joy to witness live onstage.

After this, we went straight into a screening of ‘It Is Fine! Everything is Fine’, a 74min project co-directed by David Brothers and Crispin Glover. Screenwriter and star Steven C. Stewart features in this curiously bizarre, semi-autobiographical tale of a man with severe cerebral palsy who has a fetish for girls with long hair.

After the screening Glover took to the stage for an intriguing, informative and immensely entertaining Q&A where he answered audience questions. No topic was left untouched as a refreshingly candid Glover spoke about his career and his artistic aspirations. What’s immediately apparent is Crispin Glover’s deep, honest passion about his work. He discussed his early career as a child actor getting his first paid jobs to acquiring an agent and getting his iconic role in Back to the Future.

I was, like much of the audience, primarily there because of a shared love for Back to the Future. Seeing Crispin Glover speak frankly about his experiences making that film was simply amazing. He spoke about his audition and the attraction of playing the same character (George McFly) as both a teenager and an adult – a challenge he earnestly relished.

He also spoke about some concerns regarding the end of the film. This is where the evening got really interesting as he discussed an earlier draft of the ending (when Eric Stoltz was still attached to play Marty). This version found the McFly’s wealth to be much more pronounced in the alternate future 1985, with them also having black servants. This didn’t sit well with Glover who raised legitimate concerns and questions about the damaging message the film would send out, not only on the subject of race but also wealth, ideals and corporate influence.

The ending was redrafted but he feels that this ultimately led to ill-feeling when it came to his negotiations for the sequel. He was offered significantly less than his co-stars to reprise his role; something he felt was very unfair given the circumstances. Glover also felt that the role was made deliberately ‘unpleasant’ for him because he had previously challenged the hierarchy – 2015’s George McFly was upside down for a large part of the film due to a scripted back problem. Retribution perhaps? Glover thinks so, which eventually led to him not signing up for the sequel.

This story then brought up a discussion about corporate influence in film along with other pertinent, interesting and important issues surrounding the bigger issues with studio movies and the questions we must ask as an audience. It must be said though that at no point does Crispin Glover ever knock Back to the Future or its legacy. You get the feeling that he is very proud of the work he did on that movie (and rightly so) so it’s a shame politics got in the way of him returning for the sequels, something that it seems he was very receptive to at one point.

Glover also discussed how the studio used his likeness without his consent for Back to the Future 2, which led to a lengthy court case that he ultimately won. This led to a clarification of the guidelines on how an actor’s likeness can be used. He smiles, in hindsight, at the unique and very bizarre situation of being the only actor who will ever have had their likeness used without consent. Thanks to his law suit, that will never happen again.

It’s hard to paraphrase Glover because he speaks so passionately and from the heart. Thankfully he is writing a book about all of these experiences – just one of many different irons he has in the fire at the moment. With so much depth and insight, recounting them all here would be a disservice. Rest assured when it does come out, it will be a must read.

Touching on his career and taking on roles like The Thin Man in Charlie’s Angels to fund the production of It Is Fine! Everything is Fine brought forth many memorable stories about his independent film projects and how he goes about funding, building and creating his art.

The Q&A was followed by a book signing, where Glover took time to chat with everyone who patiently queued up to meet him afterwards. He engaged the conversation and it was clear, especially to anyone familiar with fan conventions or who has ever stood in-line for an autograph, that this is a person who actually wants to get to know his audience. He asked questions and happily posed for pictures. I even discussed the recent London Film and Comic Con with him, an event held in July that brought over practically all of the Back to the Future cast for a 30th anniversary celebration. Glover didn’t attend that but when he asked me how much the event was charging for autographs he was genuinely amazed, especially when I suggested one convention visit could potentially fund his next project!

After almost 5 hours in total, the doors closed on what was a very memorable evening at the ICA. Huge thanks to Crispin Glover for his continued touring and for making the event such a special one.

You can find out more about Crispin Glover at his official website http://www.crispinglover.com/

For more information on the ICA and their upcoming events, exhibitions and screenings, be sure to visit https://www.ica.org.uk/

In this article:Back to the Future, BTTF, Crispin Glover, Crispin Hellion Glover, George McFly, It Is Fine! Everything is Fine, LFCC, The ICA