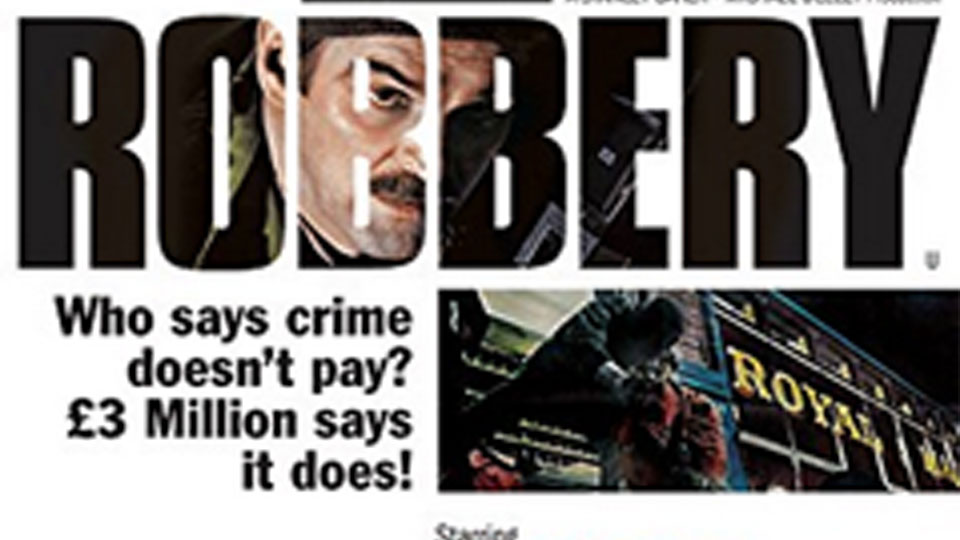 Robbery is the 1967 British movie that bagged director Peter Yates the job of directing Steve McQueen in Bullitt. It’s because the action sequences, especially a high-speed police chase that kicks things off, are thrillingly handled and raise the movie to new heights.

The thriller is (very loosely) based on the story of the Great Train Robbery – one of the most audacious plots by criminal masterminds in recent history. It stars Stanley Baker (Zulu, The Cruel Sea) as Paul Clifton, a charming, Rolls Royce-driving crook. After members of his criminal gang successfully pull off a diamond heist in an attack that involves gassing a security driver and passing themselves off as paramedics, Clifton comes up with a wheeze to intercept and rob a Royal Mail train. The plan has to be worked out to perfection in order for them to succeed, and with the share of millions of pounds in the offing, Clifton is able to assemble a crack squad of willing crooks (plus one unwilling crook – Frank Finlay is busted out of prison and his family threatened to ensure his cooperation).

Robbery is testosterone-driven: there are no female members of the gang, and few female characters. Despite her high billing, Joanna Pettet’s role as Stanley Baker’s wife is secondary and something of a token gesture. This may well alienate female viewers, but there’s plenty of action and adventure to hook young male audiences.

Stanley Baker reminds us why he was an exceptional leading man, before his untimely early death. His Paul Clifton is retained from the viewer until after the initial car chase that provides a high-octane opening. Once Baker is established he uses his natural authority to coordinate the rest of the events of the movie. Barry Foster, soon to be memorably cast as the killer in Alfred Hitchcock’s last great film, Frenzy, plays Frank, one of Clifton’s loyal gang members. Another is played with grinning menace by William Marlowe, whose distinctive pockmarked face was a regular feature of British TV and film of the era. The police inspector on the trail of the criminal gang is James Booth, whose hangdog looks lend him an immediately sympathetic quality.

The movie is well-structured, and Peter Yates’ direction keeps a strong handle on the story, which unfolds with tension and suspense. It’s also interesting to see how differently police operations were handled fifty years ago, with an officer suggesting a helicopter might help coming quite some way into their attempt to close down the gang. This is an age before CCTV, helicopter filming and the like, when criminals could afford to be way more ambitious.

One of the truly great things about this release is the quality of the restoration and the impressive array of special features. There’s an interview with Stanley Baker, presumably shot in his home, where the late, great actor chomps on a cigar as he gives a retrospective of his career. Judging by Baker’s shirt, tie and hair, it was probably made in the late 1960s or early 1970s. There’s a brand-new interview with Michael Deeley, the producer of the movie (he went on to make The Italian Job, The Man Who Fell To Earth, The Deer Hunter and Blade Runner, to name but a few…) that runs to just shy of half an hour, in which he talks about the significance of the movie. There is grainy black-and-white behind the scenes footage that, unusually for the time, has sound; and Waiting for the Signal: The Making of Robbery, a contemporary documentary offering audiences a peek behind the curtain; as well as The Great Train Robbery, a black and white German film on the same theme.

With great action sequences, stellar performers and a detailed restoration, Robbery is a great title to add to your collection. Network has released Robbery as part of their The British Film collection.