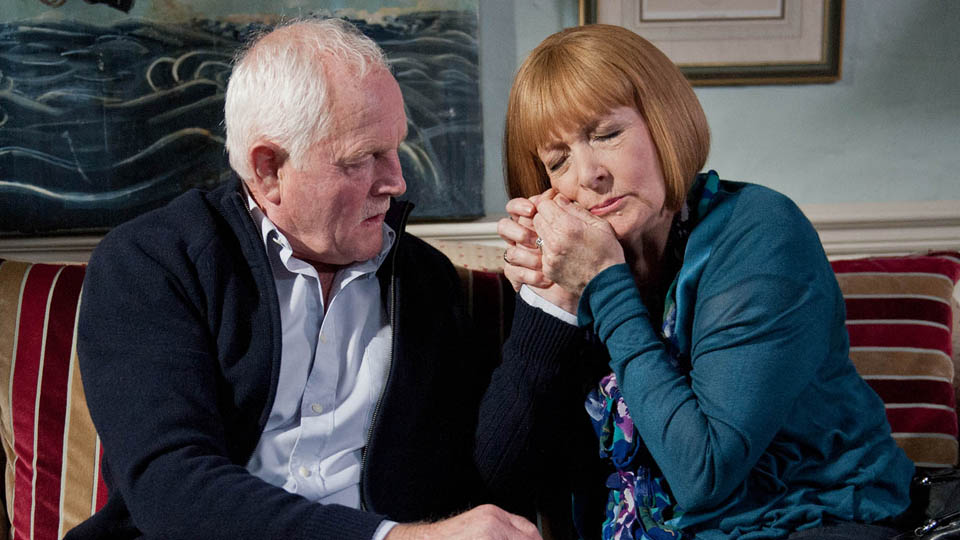 What’s in store for our favourite villagers this week?  Read on to find out what’s happening in Emmerdale over the next few days.

Val plans to fake her own death

As Bob and Val arrive disgruntled back from court, Eric suddenly collapses, clutching his chest and is rushed to the hospital.  A worried Val lashes out at Diane as she waits outside his hospital room, but when Tracy makes a joke about life insurance, Val’s mind starts to whir as a plan forms;  she’ll fake her own death to avoid a prison sentence.

As Eric becomes stable and realises her plan he despairs leaving their relationship in the balance.  Meanwhile, Val and David struggle with the news that Eric has a heart condition.  Will Eric assist Val in her fake death or is this one crazy step too far even for Val?  It seems that she manages to trick him anyway.

In true Val style she hands Eric her eulogy that she’s written for her funeral and as he reads it out loud to her, it all becomes too much.  Later, she gives Eric a hard time over the funeral arrangements and plans a dinner for her closest family and friends but is left hurt by the response.

Chrissie makes a pass at Andy

Chrissie is still reeling from the revelation about Robert’s affair and when he continues to declare his love for her this week she is adamant it’s over.  Robert is down, but is he really beaten?  He makes a call to Harriet, as a new plan forms.

It appears that Robert wants to use the incriminating photo of Chrissie kissing Cain to get his own way.  Chrissie heads to Cain when she realises, hoping he’ll be able to sort the situation, but instead he tells her to deal with it or she’ll have another enemy in him.

Running out of options, a scared Chrissie turns to Ross who agrees to jump Robert and get the photos off him.  As he successfully produces Robert’s laptop and memory stick to Chrissie, Moira is curious to find an envelope on the table addressed to her.  Upon opening it she finds the picture of Chrissie and Cain.  Ross is clearly on a mission from Charity to split up Moira and Cain.

Meanwhile, Lawrence is concerned at how venomous Lachlan is towards Robert.  Chrissie hits The Woolpack and joins Andy, unloading on him and it looks like she’s got the wrong impression as she leans in to kiss him, but will he reciprocate?

Lawrence is irritated to find an arrogant Robert sat at his desk and gives him a cheque as a bribe to stay away. Lachlan is angered when he overhears Robert wind up Lawrence.  Lachlan watches Lawrence take his heart medication, which gives him an idea.

Debbie and Ross plan to run away together

Ross watches with glee as Moira gets it in the neck from Noah about not being able to go and visit his mum, Charity in prison.  Later, though it looks like his plan is floundering.  He decides upon a new tactic.  He goes to visit Charity, signing in as Cain so when Moira takes the bait of a missing visiting order and phones the prison she’s devastated to think Cain has gone to see Charity behind her back.

Debbie’s sick with guilt as she and Pete wait for the others to turn up for their wedding rehearsal.  It’s all too much for her and she gives Ross an ultimatum; they leave now or not at all.  Later, full of nervous energy Ross confirms he’s ready to leave with her.  Now all that’s left is for Debbie to come clean to Pete.

Ross panics when Debbie tells him she hasn’t told Pete the truth yet, knowing it’s only a matter of time before Cain works him out. Arriving home Debbie fights back her tears as she begins to write a breakup letter to Pete.

As Debbie and Ross are stood with their bags packed ready to leave, Cain suddenly arrives with a bombshell for Debbie, but will it be enough to put her off Ross for good?   Debbie’s fuming following Ross’s revelation. Debbie furiously interrogates Ross. He’s desperately trying to save things but it’s clear she’s finished with him.

Cain’s left worried when tearful Debbie arrives and confirms it’s over with Ross but suddenly runs out knowing Pete might still have time to find the breakup letter. Meanwhile, Ross tells Finn the truth. On arriving home Debbie panics to see the letter has gone and Pete is already at home.

Sandy is embarrassed when he gets in a tangle with Tootsie and takes a tumble.

Both Brenda and Bob are upset when they realise he’s forgotten Gennie’s anniversary.  It seems the chances of the pair reconciling go from bad to worse.

Vanessa reveals she’s going to leave the village with the baby, but how will Adam react to that?

Joanie and Rodney claim their date was a one off, so why does Marlon find the pub’s toiler door jammed and the pair nowhere to be seen?

Dan informs Kerry she’s not invited to Debbie and Pete’s wedding before running off to avoid her reaction.