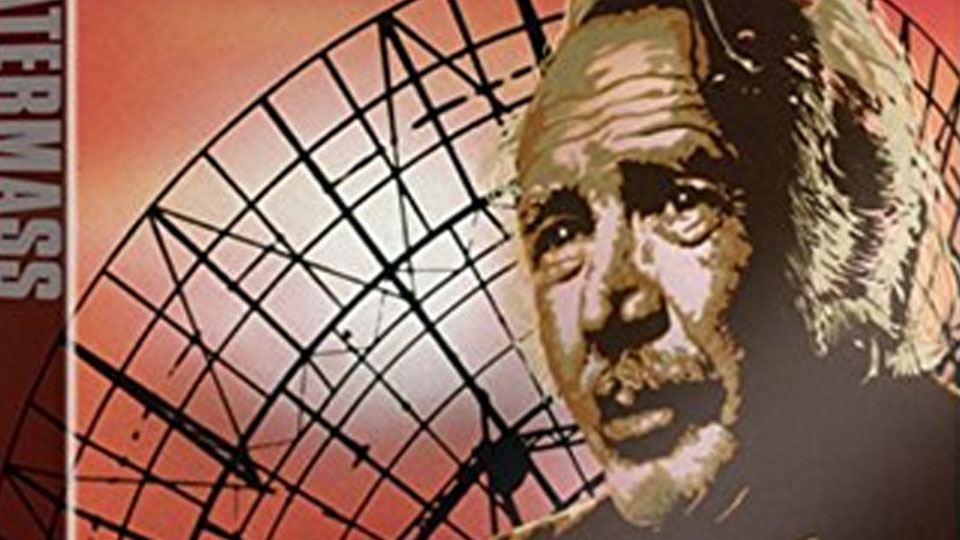 This month sees the welcome release of Quatermass, the 1979 television mini-series that saw revered screen legend John Mills take on the role of Nigel Kneale’s enduring hero, Professor Bernard Quatermass. The serial is available restored and in its original televised format, alongside the edited version of the four episodes that enjoyed a big screen theatrical release under the title The Quatermass Conclusion.

High budget and intelligent science-fiction are rarely bed-fellows, so this thought-provoking mini-series is something of an anomaly. Attentive viewing is rewarded, and as you’d expect from a Nigel Kneale script, he doesn’t do all the work for the audience, but allows viewers to use their own imaginations to fill in certain gaps in an intricate and expansive plot. The series was originally shot on 35mm film – expensive stock – and this restoration of sound and picture quality is magnificent.

At some unspecified time in the near-future, Britain is in steep decline as restlessness and anger occupies the young. Cities fall into lawlessness and disorder. When Professor Bernard Quatermass travels from his secluded cottage to London to take part in a television programme about a collaborative American/Russian space programme, he is mugged by aggressive youths on the way to the studio and saved by Dr Joe Kapp (Simon MacCorkindale). Quatermass is only concerned by his missing granddaughter, but his visit to the capital opens his eyes to the scale of the problem. Bodies and burnt out cars line the streets. Wembley Stadium, once a sporting arena, is now used by the young for Roman Coliseum-like barbaric entertainment. Anarchic gangs take pot-shots at passers-by. On the way to Kapp’s research centre, they encounter wandering crowds of youngsters who are part of a cult called the Planet People. When they gravitate to Neolithic stone circle sites, the youngsters attract the attention of a powerful alien force – but is it harvesting humanity’s youth, or transporting them elsewhere?

Quatermass is a solid piece of archetypal 1970s TV science-fiction. It benefits from a great leading performance by John Mills as an older, more sedate incarnation of Quatermass compared to his illustrious predecessors such as Andre Morell and John Robinson. This is a creepy show, with a slow build of sustained menace, and the fact that the alien power remains nameless, faceless and an unknown quantity only adds to the suspense and eeriness.

The serial is not without its limitations. The post-apocalyptic world of the story is oddly artificial, and nowhere near as haunting, bleak and evocative of other science-fiction productions of the era, such as Survivors and Day of the Triffids. It seems the BBC was, at the time, better at painting dystopias than its wealthier competitor. The neat rows of books advertised as good for burning are a heavy-handed way of suggesting the effects on culture of societal breakdown, rather than chiming with reality. The same artifice blights the Planet People, who don’t feel like a credible force or movement above a vague idea about youth group-think. Part-hippy, part-punk, the Planet People are wholly ludicrous, as are their silly costumes. There’s also an over-reliance on coincidence to string the various plot elements together which feels unsatisfying. The weird incidental music will be to the taste of some, but we found it intrusive and rather banal.

Nevertheless, the plus points vastly outweigh the negatives. There’s a strong turn by the late Simon MacCorkindale as Joe Kapp, the younger male lead. He provides the physicality and bravado that Mills was too old for, and does it with great relish. There’s a minor supporting part for Margaret Tyzack (I, Claudius) too, though her character is somewhat wasted and meets her end rather too easily. On the downside, Barbara Kellerman, never known for her subtlety, disastrously overacts her way through the mercifully small part of Joe Kapp’s wife.

The longer four-part series has more sub-plots and nuance, but The Quatermass Conclusion, occupying much of the second disc, is an enjoyable truncated version of the story that benefits from a faster pace, and the substantial cuts it makes aren’t to the detriment of the story. It’s a curious alternative. A few other standard extras bulk up the content across the two discs, but the chance to see this serial again, and in high-definition, is more than enough to recommend the title.