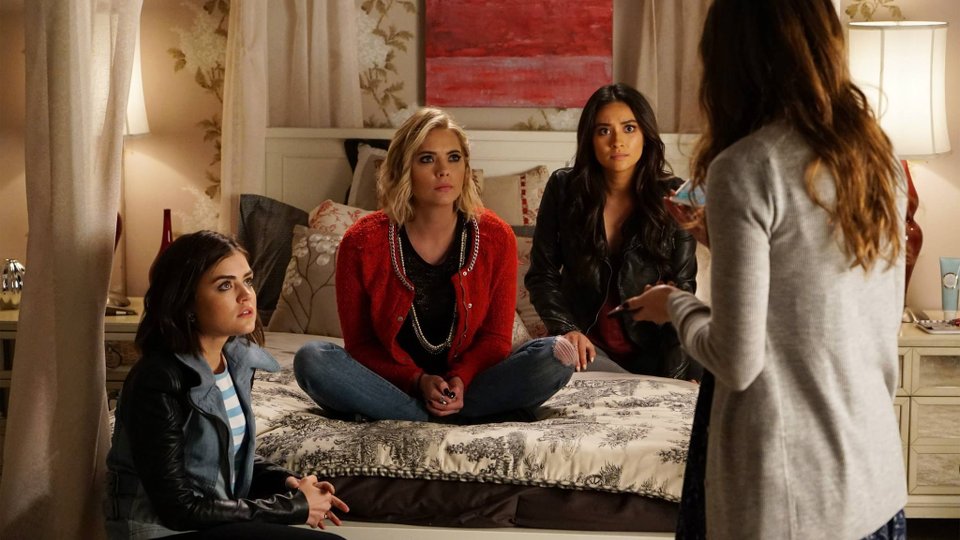 This week’s episode of Pretty Little Liars brought us so close to Charles we could almost smell him.

After receiving Charles’ creepy Birthday card, Kenneth (Jim Abele) took Alison (Sasha Pieterse) and ran for the hills in a bid to keep her safe. He tried to convince Jason (Drew Van Acker) to go with them but the most stubborn member of the DiLaurentis clan refused. Kenneth ensured that Ali had no communication with the outside world by taking away her phone but that didn’t stop the little minx. Instead she lifted her father’s phone and called Spencer (Troian Bellisario) to inform her that Charles was still very much alive.

Jason meanwhile stayed at the DiLaurentis house where he found a balloon with an invite to Charles’ Birthday party attached to it. The invite warned that he had better go to the address alone.

With the knowledge that A is tracking them through microchips in their necks, the girls couldn’t decide the best course of action. Initially they thought it best to leave the chips in place so A didn’t suspect anything but eventually they decided to play minor surgery on each other and remove them. The liars saw an opportunity to follow Jason to his meeting with Charles so they could find out who their tormentor was once and for all. By leaving the chips at Spencer’s house, Charles wouldn’t suspect that they were on to him and for once they could blindside him.

The liars were also less then impressed when a planned meeting with Lesli (Elizabeth McLaughlin) was cancelled last minute after she claimed it would set her therapy back and that she had nothing left to tell them.

It all goes to pot

Spencer decided to let Toby (Keegan Allen) in on what they were planning to do just hours after she’d sworn to him that she wasn’t lying to his face. Of course Toby reacted badly to the news that Spencer and the other girls knew about Charles all along and hadn’t said anything to the police. He assured Spencer he would trail Jason and told her and the girls to stay put. Before he went though he helped himself to a bag of sweets from Spencer’s bag not realising they were ‘special sweets’ full of pot.

Jason arrived at the destination to meet Charles and just as they were about to come face-to-face, Toby and Lorenzo (Travis Winfrey) burst into the abandoned arcade forcing Charles into a corner. Of course that didn’t stop Charles from trying to get away as he used his environment to inflict harm on Lorenzo, Toby and Jason. As he was doing that Spencer, Aria (Lucy Hale), Emily (Shay Mitchell) and Hanna (Ashley Benson) arrived after deciding to trail Toby. Toby was incapacitated on the floor after Spencer’s bag of sweets took hold of him giving him blurred vision and the inability to do his job. Unbeknownst to everyone, Ali had drugged Kenneth so she could get back to Rosewood courtesy of Mona (Janel Parrish) and she called 911 on the way. The police arrived shortly after the liars allowing Charles to get away leaving Jason furious and the girls frustrated.

Following the disastrous meeting, Spencer went to the police station to check up on Toby who was on a tough come down and asked her to leave. She tried to convince him she had no idea the sweets had been put in her bag but he was having none of it.

Emily (Shay Mitchell) wasn’t happy when Sara’s (Dre Davis) old friend Claire (Skyler Day) showed up looking for her. Last we saw Claire she was saying some pretty awful things about Sara but now she wanted to see her old friend. Emily was trying to be protective but Sara insisted on seeing Claire forcing the three into an awkward meeting. During the meeting Emily was pretty much ignored as Claire tried to get Sara to go and stay with her. Emily was quick to shut that idea down but later Sara decided it was best if she went to stay with Claire so she and Emly could figure out if there was something worth exploring between them. Sara also admitted that Claire had been honest about the horrible things she’d said and told Emily that she hadn’t liked her old self either. The two girls shared a kiss and it looks like romance is well and truly on the cards.

Mike (Cody Allen Christian) was back this week and he was upset that Mona wasn’t taking his calls and was refusing to see him. At first he thought that Aria had been interfering but she assured him she hadn’t. In the end Mike chose persistence and talked his way into Mona’s house by returning a collection of dolls that Aria had borrowed. Mona wasn’t pleased to see him but she soon let her guard down and admitted that she felt awful for what she’d done. Mike told her he was angry with her but he still had feelings for her and the two kissed.

Looking to the future

Life after A and indeed Rosewood was on the forefront of two minds this week. First up was Hanna whose mum Ashley (Laura Leighton) had got her a grant to pay for her college tuition. The only problem was that the grant came from an organisation heavily involved with the DiLaurentis family and Hanna wanted nothing to do with it. Ashley however gave her no choice when she cashed the cheque.

Also looking to the future was Aria who received a letter confirming that she was a finalist in the photo competition she entered.

Who the hell is Freddie?

Jason turned to drink to deal with his anger after Ali and the liars ruined his opportunity to see his brother. As Ali returned home and tried to talk to him, they heard the sound of a child asking Jason to play coming from somewhere in the house. They followed the voice and found an old movie being played. In the movie Jason and Ali were playing with another boy who was being referred to as Freddie. Ali remembered the occasion and pointed out that the boy was their cousin but it soon dawned on them that Freddie was Charles.

As the episode drew to a close, Charles received a painting of a moment in that video with a note claiming to be from an ‘ally’. Who could that be we wonder?

Pretty Little Liars continues Tuesday at 8/7c on ABC Family in the US and Wednesday on Netflix in the UK. Watch the promo for next episode, frAmed, below: