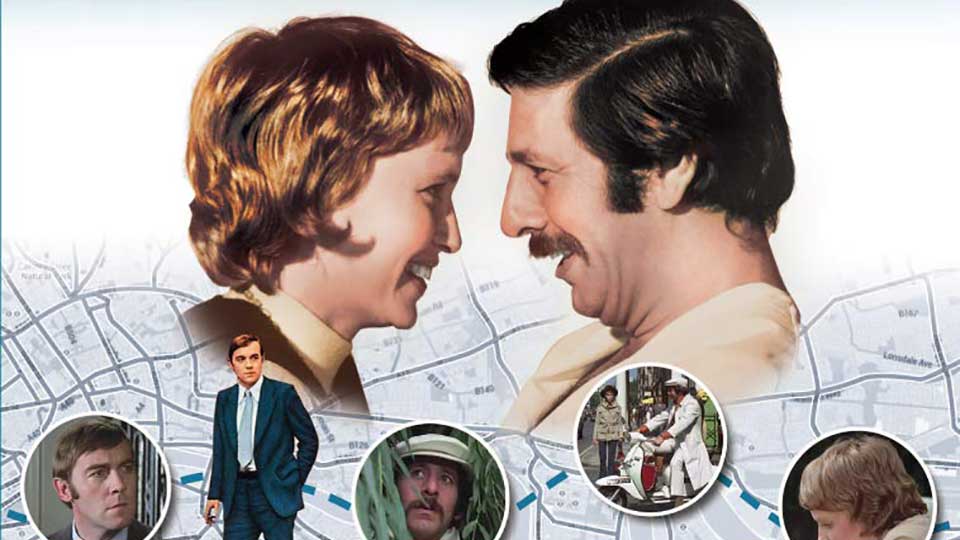 Follow Me (released in the United States as The Public Eye) is a 1972 film based on Peter Shaffer’s play. Topol, who was hot property at the time thanks to his career-defining part in Fiddler on the Roof a year earlier, was a box office draw, as was Mia Farrow (Rosemary’s Baby). It was the final completed film of Carol Reed, who perhaps ranks alongside Alfred Hitchcock and David Lean as one of Britain’s finest Twentieth Century directors. The score is by John Barry, who was behind the definitive James Bond soundtracks, and there’s extensive use of London locations in the glorious summertime sunshine.

So far, so good. Yet, oddly, in the almost five decades since it was made, Follow Me hasn’t troubled the list of all-time classics. The key to this is perhaps in the touching, yet rather slight and implausible plot.

Charles (Michael Jayston) and Belinda (Mia Farrow) are a young married couple. At first, there is a lot of romance, but after the initial honeymoon period, a distance grows between them. Charles is more sophisticated and better-read than his wife, but where previously he could impress her, now she increasingly spends time away from him. Convinced that Belinda is having an affair, Charles hires private detective Julian (Topol) to follow her. The twist is that Belinda becomes aware of Julian, but finds she doesn’t mind his attention, though they never speak and she has no idea who he is. She finds reasons to go out so that she can be followed by the charming and funny Julian, and an unlikely bond develops between them. When the wheeze is exposed, Belinda feels cheated by both men. They must work together to make things right, but what if they are competing for her affections?

The mixing of genres and subjects, between an examination of marriage and a light and whimsical romantic comedy, asks a lot of the viewer in terms of suspension of disbelief. This is not the film to win over world-weary cynics. Graham Greene’s The End of the Affair had used a similar plot device, whereby a private detective had uncovered that a woman’s attentions were not taken by another man, but that twist was used to devastating effect. Even in the rules of the lighter story of Follow Me, Charles’ conversion seems Damascene in its speed. It’s a shame, as the premise is intriguing, but the way the plot unfolds doesn’t entirely satisfy. This is too often the case with Peter Shaffer’s writing.

Despite the problematic plot, Follow Me still has a lot going for it, not least the excellent performances – and given that parts played by supporting characters are usually non-speaking, it retains its theatricality as a three-hander. Michael Jayston hit a sweet spot in the Sixties and early Seventies, and it’s a shame his star waned to an eventual long-running part in TV soap Emmerdale. He has always been brilliant as surly and tightly-coiled cads. The best chemistry is between Mia Farrow, who was still youthful and sparrow-like at the time, and Topol, who is value for money in everything.

The soundtrack is notably good too, and distinctively John Barry. One of the extra features on the disc is a music only option, to fully appreciate the score. It is full of Barry’s familiar signatures.

Follow Me is a competent and well put-together film which holds the viewer’s interest and doesn’t outstay its welcome. Considering the distinguished talent involved, it’s a shame it doesn’t have a little more weight.

Follow Me is released as part of Network’s The British Film collection, and is available on DVD and Blu-ray.