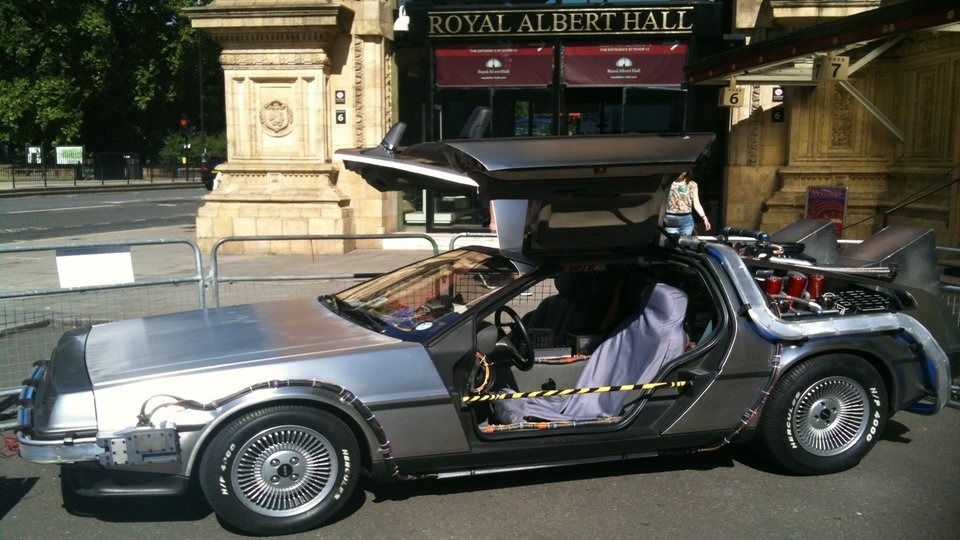 The greatest movie of all time played to sell-out crowds yesterday (July 4th) to celebrate its 30th anniversary. Back to the Future: Live in Concert at the Royal Albert Hall proved to be the hottest ticket in town as people from all around the world gathered to witness something very special.

The UK première of Back to the Future: Live in Concert included a very special treat for fans – new music written especially for the production by original composer Alan Silvestri.

The crowds soon amassed at the famous Hall and were greeted with the DeLorean parked outside the main entrance. Fans queued all around the block to take pictures with the iconic car. Inside, there was a nice selection of Back to the Future memorabilia on display including gems such as Marty’s trainers, retro cans of Pepsi, a Hoverboard, Marty’s letter to Doc and the DeLorean’s Outatime number plate.

The great Hall has never looked better and once inside, people quickly took to their seats. After a brief series of trailers showcasing future live movie events taking place at the Royal Albert Hall, including a Star Wars celebration, Ratatouille, Alice in Wonderland and the newly announced Raiders of the Lost Ark, the lights went down and the orchestra arrived onstage.

The integration of live music to the crystal-clear projection of the film was both seamless and breathtaking. Silvestri’s music was given the adulation it deserves with the crowds repeatedly breaking out into spontaneous applause during the first half.

After a brief intermission, the orchestra returned and began their second set with a rendition of the Back to the Future 3 score. This went down extremely well before they resumed scoring the original movie.

On its 30th anniversary, Back to the Future still remains the greatest movie of all time. It utterly captivates from start to finish with a perfect blend of action, comedy, romance and adventure. The crowds really embraced the film too with many dressed up for the occasion and constant cheering at key moments of the narrative like George finally standing up to Biff and Marty playing the guitar at the Enchanted Under The Sea dance.

The performance ended with 4 standing ovations as the orchestra deservedly took in the praise. They did an amazing job. The crowds flocked out of the great Hall with broad smiles, clutching their rare BTTF: Live programmes and having one last glimpse at the DeLorean outside – now fully lit up with its time circuits on.

Back to the Future: Live in Concert was a simply magical night full of 5 star wonder and excitement. It was a spectacular celebration of this amazing film, a sensational homage to the score and provided one of the best events the hallowed Hall as ever witnessed.

Check out some images from Back to the Future: Live in Concert at the Royal Albert Hall.