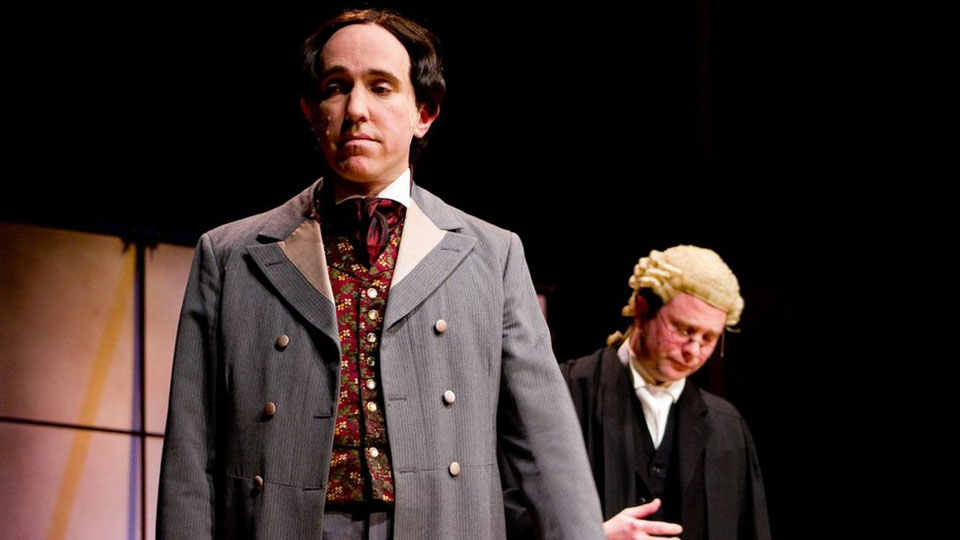 The Trials of Oscar Wilde, currently embarked on an extensive UK tour, tells the tale of the two trials of the famed Victorian playwright, with faithfulness to historical detail. Everyone knows that Oscar Wilde was imprisoned, but not many know the details of his downfall. This show is a welcome illumination of the void, and it vividly recreates the circumstances that led to Wilde’s ruin.

Written almost entirely using courtroom transcripts and contemporary media reportage, the play whisks the audience back to 1895, to a time when Oscar Wilde, high on acclaim for his latest show The Importance of Being Earnest, pursued a civil case for defamation against the Marquess of Queensbury (his lover’s tenacious father) who had goaded him with an illiterate note accusing him of homosexual conduct. Surely the jury would find in favour of a major celebrity? When the case doesn’t turn out in Wilde’s favour, he’s left facing a second trial as criminal proceedings against him are launched.

The play is striking a nerve with audiences, and this is for several key reasons. There have been a number of high-profile celebrities in the dock in recent years from Nigella Lawson to Nigel Evans, William Roache and Rolf Harris. Each occasion has generated a huge amount of press coverage, feeding off a public insatiable for scandal. Oscar Wilde, whilst perhaps not the original celebrity to meet his downfall in the dock (possibly Socrates earns the dubious distinction), still fascinates us, and his story is more relevant than ever. In the time it took for the coalition government to pass equal marriage into law, society has witnessed right-wing and religious fanatics crawl out of the woodwork to espouse a level of anti-gay hyperbole that possibly hasn’t issued from Fleet Street reports since Wilde’s conviction for gross indecency.

Shining a light on events in 1895 has a number of effects. It starkly brings home the way in which social attitudes and mores about homosexuality have changed in the UK in the intervening years, most especially in the last four decades. There’s the simultaneous realisation that far from being an historical curiosity, similar cases with similar outcomes can and do play out in courts of law in far too many countries in the world today. Thus it’s impossible to care about equality, especially gay rights, and not find this remarkable play a deeply moving experience. Watching a funny, charming, witty man’s downfall over something as trivial as his sexuality, and all the time knowing what the result will be, gives an edge of Greek Tragedy to the play. By the end of the show we felt we had followed Wilde on his descent – and it’s one hell of a journey.

There are other reasons to account for the success and resonance of the show. Casting is crucial, and John Gorick does a splendid job of bringing to life Oscar Wilde. As well as the acutely-timed wit that everyone expects to be pitch perfect (and is), Gorick brings flashes of vulnerability to Wilde, and the contrast between his confidence, bordering on arrogance in the first half and self-restraint in the second is effective in darkening the mood. With only three actors involved in the production, the other two have their work cut out providing not just the barristers (William Kempsell for Wilde and Rupert Mason against) but every other part from witnesses to policemen. Effectively, Mason plays all of Wilde’s key opponents, including the bullish Marquess of Queensbury. They both have a lot of fun with the witnesses, with Mason’s cleaning woman at the Savoy Hotel and Kempsell’s young valet/male prostitute, and a professor of massage providing levity and humour.

Wilde’s lover Lord Alfred Douglas is notable for his absence from the show, which plays out as a courtroom drama with a few flashbacks to key events, and leaves Wilde a lonely figure, standing solely by his convictions and living on his wits. Transitions between the scenes is occasionally problematic, leaving Wilde quoting pertinent passages from his canon, but ones that serve to mechanically move time forward. The fidelity to historical documents also leaves all of the actors facing occasionally over-long speeches where interaction between them, even at the expense of accuracy, would have been beneficial dramatically. That said, for the most part the show engages from the opening scene, and at its best leaves the audience holding its breath as the tension ratchets up inside the courtroom. The direction from Peter Craze succeeds in varying the pace, but also in allowing the actors, especially Gorick, moments of stillness from which pathos derives.

Overall, The Trials of Oscar Wilde is hugely enjoyable and thought-provoking. It sheds light on a genius who continues to fascinate us, as well as tapping into current concerns about celebrity trials and the criminalisation of homosexuality as equality takes one step forwards and two back. Wilde aficionados will love it – but the themes reverberate far wider.

Last night’s show at Greenwich Theatre was a special performance in aid of the charity Stonewall.

Check out our interview with the show’s director, Peter Craze, and the schedule of remaining performances to see if it’s visiting a theatre near you before it comes to a close on 12th July.