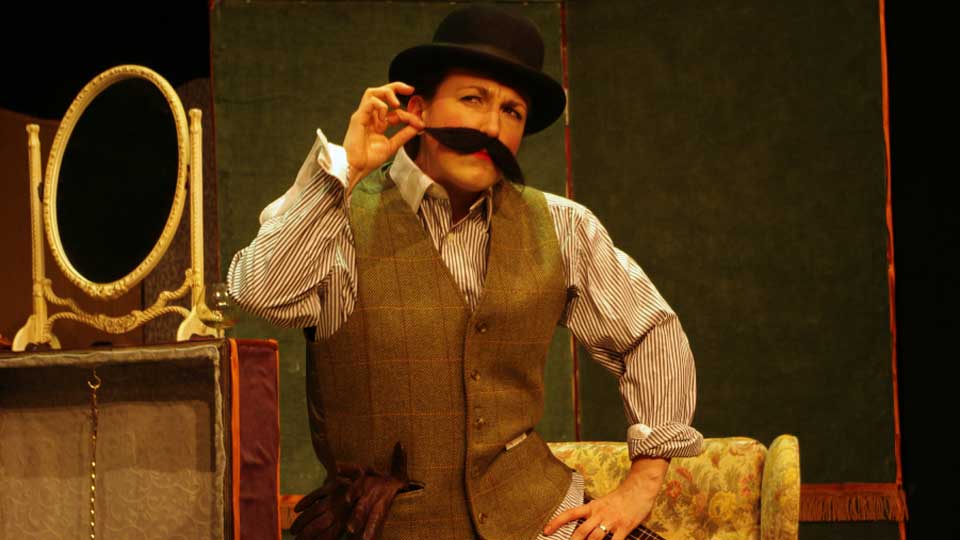 The terrific venue of Wilton’s Music Hall, recently saved from the philistine’s bulldozers, is the perfect home for Four Farces. The show does exactly what it says on the tin, presenting four thirty-minute Nineteenth Century one-act farces. The evocatively faded grandeur and original features of Wilton’s Music Hall reverberate with the ghosts of our Victorian ancestors who gathered between its walls; and this full-blooded presentation of the best of their broad comedies makes for a delightfully entertaining evening.

In the one and a half centuries or so since these pieces were written, styles and tastes have changed. Therefore those whose cultural input consists entirely of understated film performances and subtle comedy may find Four Farces a bit too in-your-face: it’s a matter of taste. Taken on its merits for what it is, it’s fantastic to see some old, old school comedy, full of unashamed silliness and vastly heightened reality, with large performances, the odd dash of slapstick and comedy moustaches to boot.

Four Farces is presented by European Arts Company. The show is performed by a trio of very talented comedy performers; and the Victorian atmosphere is further bolstered by an impressive wardrobe of Victorian costumes.

The evening’s entertainment kicks off with Box and Cox, one of the best-known Victorian farces. It sees unscrupulous landlady letting out the same room to both Mr Box and Mr Cox, whose alternating working hours ensure that they’re never at their lodgings at the same time. When the two men’s paths cross, sparks fly, especially when they learn they are each trying to escape from an engagement to the same dreadful harridan. Wanted, A Young Lady sees a wheeze involving mistaken identity and some enjoyably preposterous cross-dressing from John O’Conner as a young lady perpetuates a double bluff. It has arguably the best twist of the four, since O’Conner’s character is not who you’re led to believe. A Most Unwarrantable Intrusion sees Mr Snoozle trying to enjoy a rare day of peace to himself whilst his wife, daughter and niece are away. He is quite unprepared to be interrupted by a young man with an ingenious/mad plan to force his way into Snoozle’s life. The final piece arguably comes closest to making a serious point, since Duel in the Dark concerns marriage fidelity in which an inventive young woman disguises herself as a French Countess and tests her husband by setting out to seduce him.

In all four pieces, the plot, which is absurd to begin with, tightens into increasingly absurd knots like the best farces of Plautus, and with all the action taking place in a single act, they never outstay their welcome. These pieces aren’t trying to change your view of life or stretch the boundaries of genre, they are simply unashamedly entertaining nonsense that’s often laugh-out-loud funny.

The performances are terrific and the three actors combine brilliantly. John O’Connor is gloriously over-the-top throughout, and ad-libs brilliantly when the occasional prop goes awry. Richard Latham runs the gamut of crusty older characters from stern uncles to drunken manservants. Asta Parry provides the female characters (save for Latham as Betsy, a maid) and plays old and decrepit and young and glamorous with equal aplomb. All three have terrific comic timing and they never let up the energy over the two-hour duration of the show, which is an incredible achievement and in part due to tight direction from Jonathan Kemp. It’s also apparent the actors are having terrific fun performing it.

For an evening of quality lowbrow Victorian entertainment played at full throttle, you can’t go wrong with Four Farces. It’s the sort of show that’s ideal for a relaxed audience with a few drinks inside them who are in the mood for something silly.

You can catch the show at Wilton’s Music Hall until 27th June. It rounds out its tour after that at Chipping Norton Theatre and Greenwich Theatre. See http://www.europeanarts.co.uk/index.php/currently/27-four-farces-spring-2013 for more information.