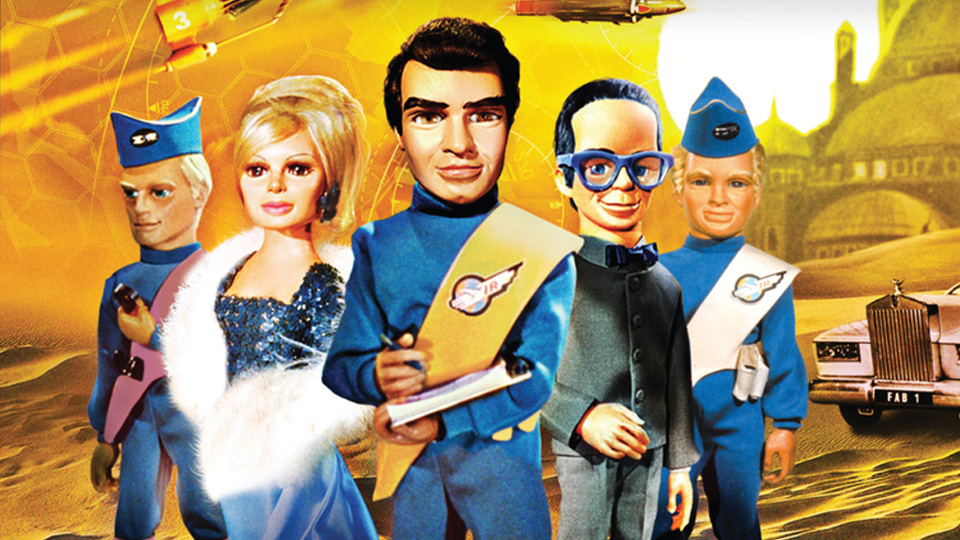 In 1965 Gerry Anderson led his team at AP Films to produce one of the most expensive and enduring television programmes of all time. Thunderbirds was the culmination of several years experience in the creation of adventure drama with marionettes and scale models, utilising cutting-edge technology and special effects to present a futuristic world. Filmed using a process coined Supermarionation, Anderson’s shows were unique in their unmatched production values, perilous stories and orchestral scores, evidenced by the popularity of Thunderbirds fifty years on.

The entirety of audiences in 1965 experienced Thunderbirds in low resolution monochrome, on comparatively small television screens. Regardless of the broadcast limitations of the time, the explosive bravura of the series shone through and Thunderbirds was a huge success in Europe, enjoying a phenomenon which was expected to spread to the lucrative American market. ITC’s Managing Director, Lew Grade, was so pleased with Thunderbirds that he quickly funded a project to bring a movie version to the big screen. Capitalizing on the show’s popularity, a cinematic adaptation would offer all the action and adventure in full Technicolor with a widescreen frame. Scripted by Gerry and produced by Sylvia Anderson, Thunderbirds Are Go was released through United Artists shortly before the Christmas of 1966.

The story is a comfortably familiar one. John Tracy, a former astronaut and billionaire industrialist, decides to use his wealth to help the world by creating International Rescue, a secret force of super vehicles designed by an in-house genius known simply as Brains and manned by his sons, each a superb athlete and trained expert in their fields. When the Zero-X mission to Mars is subject to a terrorist threat from the Hood, International Rescue provides security for a successful launch, however a freak malfunction on return to Earth tasks the whole Thunderbirds team with a rescue attempt like no other: Can International Rescue save the crew as the Zero-X plummets out of control into a populated city?

Gerry Anderson’s script borrows much from the Thunderbirds series and is comparable to the show’s pilot episode Trapped in the Sky, where a huge airliner is sabotaged by the Hood, necessitating a perilous rescue attempt during the aircraft’s descent. Where Thunderbirds Are Go differs from it’s small screen counterpart is in its tone; a shade darker and more violent than the series, it exploits a feature-length pace allowing characters to breathe. All five of the Tracy brothers share proportional screen time, perhaps with the exception of John who remains incarcerated in space monitoring station Thunderbird 5.

The iconic Lady Penelope (voiced by Sylvia Anderson) and Parker are well deployed in their roles as British secret agents in a subplot which not only reinforces the American view of stiff Brits, but also ventures to place a women in an independently empowered role, appealing to an audience of girls as well as boys. The guest characters of Captain Paul Travers and Navigator Brad Newman (voiced by Bob Monkhouse) are also squarely developed along with the rest of the Zero-X crew, drawing inspiration from the stoic Gemini and Apollo astronauts of the day.  Perhaps due to the film’s totally unique presentation and repertory company of marionettes, the puppetry demands attention in a sort of uncanny-valley fashion; mesmerising in their lifelike detail and engaging due to their futuristic surroundings. There is nothing quite like the techno world which Thunderbirds inhabits, and this is arguably its defining charm.

With a budget of £250,000, Thunderbirds Are Go was the most expensive production that the Andersons had overseen and the investment shines through in every scene. The puppets are beautifully sculpted and finished to a level which truly stands up to big-screen scrutiny. Indeed, everything featured in the television series has been uprated to a standard which is wholly staggering. Famous for its fleet of miraculous vehicles designed by Derek Meddings, craft such as Thunderbird 2 and space rocket Thunderbird 3 appear genuinely huge, filling the widescreen frame with an added weight and realism. The audio mix is also ahead of its time, utilising layers of mechanical sounds to buttress the scale and power of the model craft. Something of a tech-head’s paradise, the real star of the film is the incredibly complex Zero-X vehicle, debuting in a meticulous assembly sequence, foreshadowing a mechanical ballet which would define Stanley Kubrick’s 2001: A Space Odyssey.

In a brief segue of pure indulgent fantasy, a dream sequence features Cliff Richard Jnr and The Shadows. Performing Shooting Star, a toe-tapping tune that captures the upbeat fun of Sixties bubblegum pop, The Shadows’ interlude is irresistibly camp fun and intentionally hilarious, with a guitar-playing puppet which is indiscernible from the real Hank Marvin.

Unfortunately Thunderbirds Are Go did not live up to Box Office expectations. Putting this down to a fluke, Lew Grade commissioned a follow-up in 1967. Thunderbird 6 was produced after the production of the television series had long since completed, filmed concurrently with Anderson’s new project, Captain Scarlet and the Mysterons. If Thunderbirds Are Go was a boy’s own disaster flick, Thunderbird 6 is something of a murder mystery travelogue aboard a cruise liner. The brainchild of Brains, Skyship One is a futuristic airship on the frontline of International Rescue’s crime control. But when it’s hijacked by terrorists, only a battered old Tiger Moth plane can help them save the day. Thunderbird 6 is born.

Lady Penelope assumes a central role in Thunderbird 6, signifying a change of tack as the story focuses on drama, developing story through dialogue as opposed to a reliance on technology and action. At 85 minutes, the movie feels a little sluggish and rather chatty, perhaps taxing the limits of the puppet characters in way which Thunderbirds Are Go sidestepped in favour for explosive peril. Nevertheless, Thunderbird 6 still breathes charm with luscious production values, offering a level of depth and intensity which builds upon the previous film. The final disaster sequence, however, is agreeably spectacular and is bound to have all the family on the edge of their seat.

The binding factor that provides the Thunderbirds movies both their gravity and charm is a superlative soundtrack by Barry Gray, who underscores a model world with all the weight and grit of a full orchestral sound pallet. The Thunderbirds theme remains one of the most famous marching scores of the 20th century, whilst his thematic work for Zero-X and Skyship One remain timeless anthems in their own right.

The restoration carried out on these high definition releases is an exceptional improvement over the DVD release. Shot in Techniscope, which uses half of a 35mm frame to attain a widescreen ratio, the image essentially has a grain structure comparable to 16mm. The immediate benefits of a widescreen presentation is that vehicles film the frame, whilst the tops of the heads of the puppets are cropped, hiding strings which would appear jarringly obvious on the big screen. The prints have been meticulously cleaned up and do not belie their age of fifty years, whilst the soundtrack remains robust and explosive, with a 5.1 remix which further extends the soundscape for those with appropriate setups. There are also a host of intriguing extras on the disc, including trailers, interviews and behind the scenes footage. The accompanying commentaries from Sylvia Anderson and David Lane are particularly informative, downplaying their achievements with courteous humility.

With a new Thunderbirds series now airing this season, the Blu-ray release of these two classic movies is prescient and an excellent way-in to the classic, original series which captured the imagination of generations. A fact which remains extraordinary in both films is that every frame is a special effect shot, crafted by hand. The production value on screen showcases a level of craftsmanship comparable to the quality of early Disney animations.

Whilst Gerry Anderson’s name hangs over the Thunderbirds phenomena, these movies are truly the work of Sylvia Anderson, expressing a warmth and stylish detail which Sylvia imbrued in all of her productions. Bold, broad and brave blockbusters in miniature, Thunderbirds Are Go and Thunderbird 6 are unique movie experiences which are all the more impressive in Fabulous Films’ meticulous high definition transfer. Essential viewing for fans of all ages, these classic films will ensure future Sunday afternoons are futuristic and FAB once more.

Samuel Paynehttp://samuelpayne.weebly.com
Reviewer of Theatre in the North, including releases of classic film and television.
Previous article
See Matt Damon, Kristen Wiig in new The Martian images
Next article
Watch Frank Sinatra in exclusive The Man With the Golden Arm clip