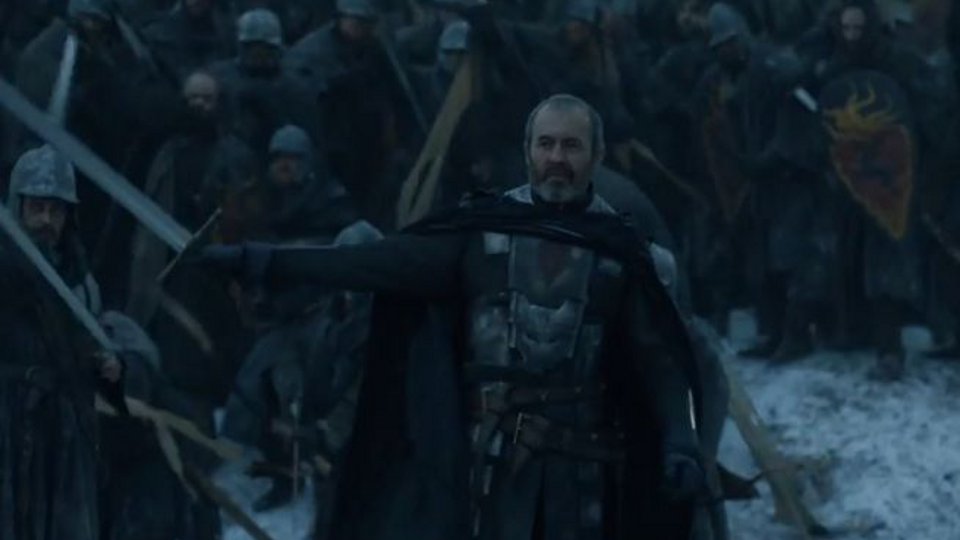 The ninth episode of Game of Thrones season 5 – The Dance of Dragons – concentrated on happenings near Winterfell, Castle Black, Dorne, Braavos and Meereen. Despite having one episode left to go we’re already sad that season 5 is almost over.

The tenth and final episode is written by showrunners David Benioff & D. B. Weiss with David Nutter in the director’s chair for the second time this season. The episode is titled Mother’s Mercy.

The preview opens up panning over a landscape, we’re not quite sure where it is but is that a tiny figure on top of the cliff on the left? Maybe it’s Dany? (Emilia Clarke)

The shot switches for one of Daario (Michiel Huisman), Tyrion (Peter Dinklage) and Jorah (Iain Glen) sat on the steps in Dany’s throne room. They all look a little lost and we wonder if she hasn’t returned with Drogon. The synopsis hints that she could be somewhere else?

Next we see a worried Lord Commander Jon Snow (Kit Harrington) sat at his desk in Castle Black while Sam (John Bradley-West) asks what he’s going to do. Will he send help for Stannis or take the fight to the White Walkers?

This is followed by a broken Cersei Lannister (Lena Headey) who looks about ready to confess. The title of the episode appears to be a hint towards this too.

In his desperation to win Stannis (Stephen Dillane) could well be broken himself. We hear Melisandre (Carice von Houten) declaring that the Lord of Light has made good on his promise. We wonder what exactly that means and if Stannis will prevail against the Boltons.

The preview ends with a shot of Brienne (Gwendoline Christie) and Pod (Daniel Portman) before a clip of Sansa (Sophie Turner) declaring that if she is to die let it happen while there is still some of her left. We’d love to see Brienne and Pod get something to do in the finale and are hoping that Sansa survives at least long enough to make Ramsay Bolton suffer.

Let us know your predictions for the season five finale in the comments below.

Game of Thrones will be returning for season six in 2016 on HBO in the US and Sky Atlantic in the UK.