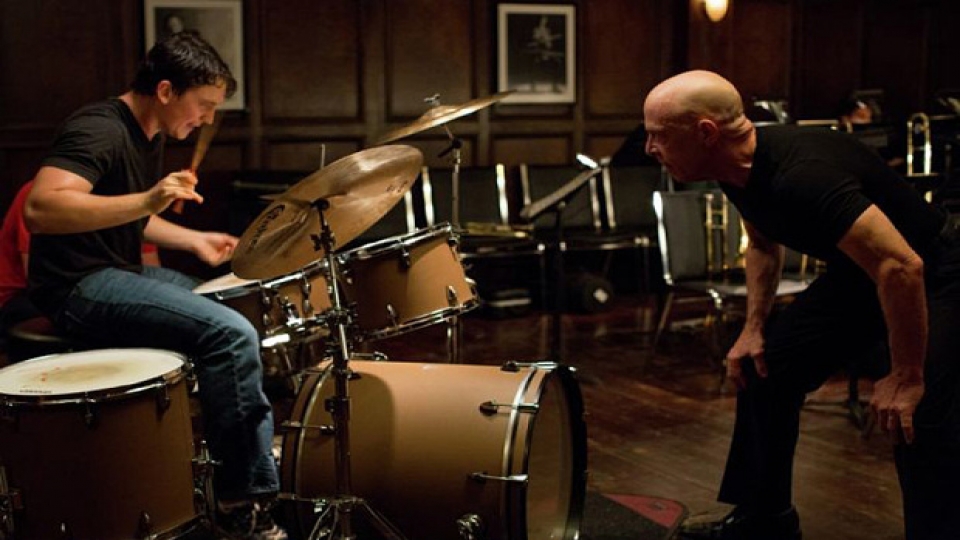 Andrew (Miles Teller) is a headstrong young musician who has a golden opportunity lying ahead of him. Looking to impress his cantankerous, unflinching music instructor Mr. Fletcher (J.K. Simmons) comes at a steep price but is Andrew willing to do whatever it takes to achieve true greatness?

Young writer/director Damien Chazelle was the toast of the London Film Festival last year. Playing to packed audiences and standing ovations, Whiplash tells a compelling story about the pursuit of true greatness. Chazelle’s blisteringly-paced story has bags of style, whilst being an utterly absorbing drama that doesn’t pander to the mass market.

Whiplash is a true storyteller’s film, with two remarkable actors excelling in their roles. Miles Teller shines as Andrew and it’s easy to champion his cause. However, Chazelle intentionally doesn’t make Andrew out to be a do-gooder. There are frequent instances when his actions and motives are very questionable indeed and that is what’s great about his role. It’s truthful and painfully real.

J.K. Simmons, so often the best thing in every one of his movies, excels here. Mr. Fletcher is a real character for the ages – one that will soon be immortalised in the annals of film and who provides an endless stream of quotable, offensive gems. Fletcher is one of the true greats of cinematic anti-heroes – a terribly driven and harsh man who never wants to settle. Simmons is a revelation here and hands in one of the performances of the year. He justifiably picked up all of the ‘Best Supporting Actor’ prizes during awards season.

Stripped of needless sentiment and frivolity, Whiplash allows the strength of its premise and the situation do all of the heavy lifting. With believable characters and a knowing sense of intensity, Whiplash is a compelling watch and a massive success that looks, sounds and feels every bit like an awards-season champion.