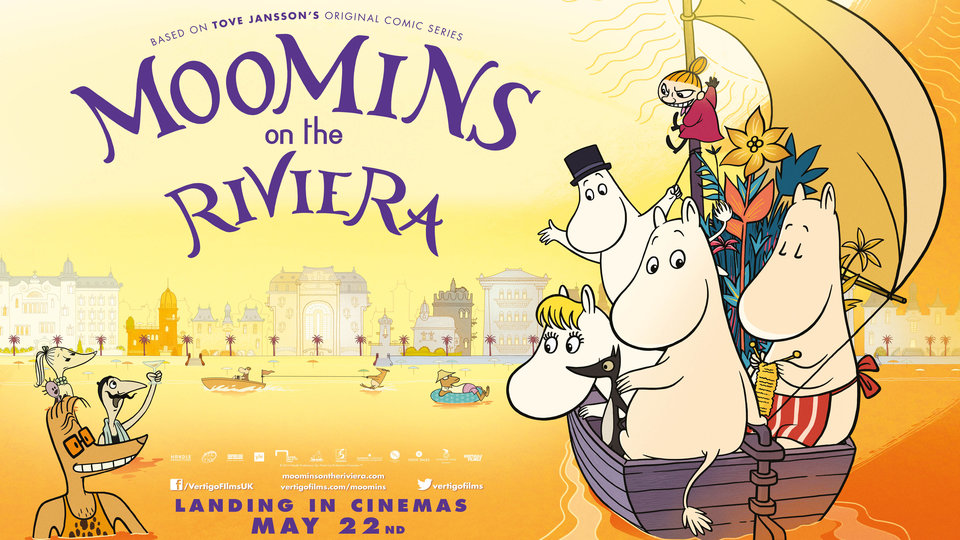 Join the Moomins and friends old and new as they leave Moominvalley behind and head south in Moomins on the Riviera, which is out now in cinemas nationwide through Vertigo.

In search of adventures, the Moomins, Snorkmaiden and Little My set sail for the French Riviera. After a perilous journey, they reach their dream destination where Snorkmaiden is dazzled by the attentions of a playboy leaving Moomin consumed by jealousy. When Moominpappa befriends an aristocrat and adopts the name ‘de Moomin’, an exasperated Moominmamma retreats to the calm of their trusty old boat, to wait for her family to come to their senses and to remember their motto: “Live in peace, plant potatoes and dream.”

Directed by Xavier Picard and produced by Hanna Hemilä, Moomins on the Riviera was created in a unique hand-drawn animation technique inspired by and based on Tove Jansson’s original comic strips. The feature celebrates the beloved characters in their original context and reflects their cross-generational and universal appeal, even 100 years after the birth of their creator, Jansson.

In this the UK version, Moomin is voiced by Russell Tovey (The Pirates! Band of Misfits, Being Human, Him and Her). Nathaniel Parker (Merlin, Stardust, The Chronicles of Narnia: The Voyage of the Dawn Treader) and Tracy Ann Oberman (Toast of London, Friday Night Dinner, Dr Who) play Moominpappa and Moominmamma respectively. Stephanie Winiecki plays Snorkmaiden and Little My is played by Ruth Gibson.

The film is produced by Handle Productions Oy in Finland and Pictak Cie in France. Sophia Jansson, niece of Tove and daughter of Lars, who drew the later comic strips, is on board as associate producer.

To be in with a chance of winning a goody bag filled with Moomins treats like a Moomin Plush Toy (either Moominmamma, Moominpappa, Little My & Snorkmaiden), a Cinema poster, 2x t-shirts and a selection of family movies on DVD – Pudsey, Allstars and Unbeatable, all you need to do is answer the question below correctly.

In this article:Competition, Moomins, Moomins on the Riviera