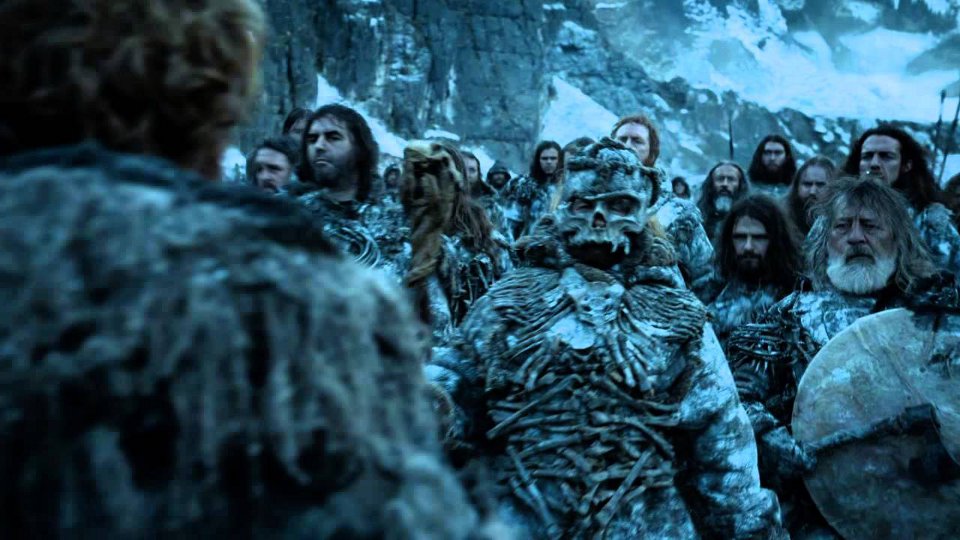 The seventh episode of Game of Thrones season 5 – The Gift – concentrated on happenings at Castle Black, King’s Landing, Winterfell, Dorne and Meereen.

The eighth episode is written by showrunners David Benioff & D. B. Weiss with Miguel Sapochnik in the director’s chair for the second time this season. The episode is titled Hardhome.

The official synopsis for Hardhome reads:

The preview opens up showing Jorah (Iain Glen) and Tyrion Lannister (Peter Dinklage) standing before Dany (Emilia Clarke). She’s heard asking ‘Why should the people trust a Queen who can’t keep her promises?’. We’re presuming she’s referring to the fact that she banished Jorah and now he’s returned and hoping to be welcomed back.

We have a feeling she might just take him back due to the fact he’s brought her Tyrion. The imp is sure to be a huge asset to her as she attempts to take the Iron Throne. Tyrion is just happy to be alive and wants revenge himself so we can’t wait to see how this pans out. That’s presuming she doesn’t just have the pair of them executed!

In Winterfell we see Sansa (Sophie Turner) confronting Reek/Theon (Alfie Allen) again. He ignored her request last episode but she really doesn’t have anyone else to help her right now. She’s heard to be saying she would do the same to him as Ramsay (Iwan Rheon) had done if she could. We’re sure she’s more than a little pissed at him but can she really hope to force him against Ramsay?

In King’s Landing we see that Cersei (Lena Headey) is getting the same treatment as Margaery. Sat in a filthy cell dressed in dirty rags is quite the change for her and she’s as angry as ever. We can hear her say she refuses to beg forgiveness. We’ve got our own little smug grin to see the tables turned on her and wonder how she might get out of the mess she finds herself in.

In the North we see Jon Snow (Kit Harington) arriving at what we presume is Hardhome. He’s travelling with Tormund Giantsbane (Kristofer Hivju) in an attempt to convince the free folk to come and fight with him. It looks like he’s got an impossible task on his hands.

Back at Castle Black we see that Sam (John Bradley-West) is still supporting Jon and trying to explain to the others why he has gone with Tormund.

The synopsis mentions that we will also be seeing how Arya is progressing and we could see her taking the face of another.

In this article:Game Of Thrones, Hardhome