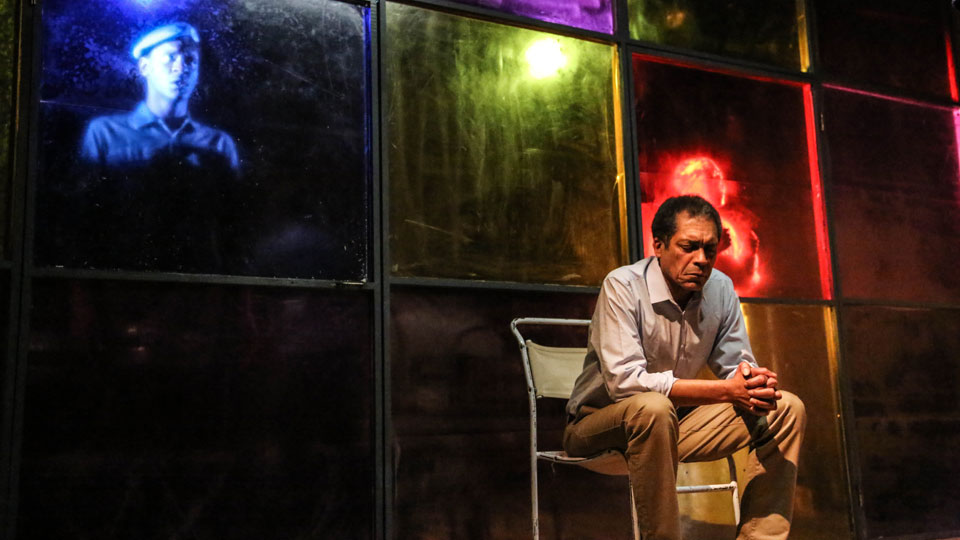 Sense of an Ending, now playing at Theatre503, is a thoughtful piece that tackles the Rwandan Genocide of the mid-1990s when at least half a million Tutsis were massacred by the Hutu.

Ken Urban’s intelligent play sees an American journalist Charles (Ben Onwukwe, perhaps best known for his role as Recall in London’s Burning), visiting Rwanda in 1999 to work on a story he hopes will restore his battered reputation. The angle he’s looking for is evidence of the innocence of nuns charged with crimes against humanity for complicity in a massacre at the local church, and he speaks to them over the course of weeks whilst they are detained before facing trial in Belgium. A survivor of the massacre points the finger of guilt at the nuns. Yet as Charles digs for the truth he realises that, with emotions running high on all sides, everybody has their own version of the terrible events; and truth, guilt and innocence are changeable and intangible.

Sense of an Ending covers a lot of ground in a single, ninety-minute act. The finest achievement of the writing is the way in which Urban shifts back and forth audience’s sympathy for all of the characters, with intriguing twists and turns as lies and deceptions are revealed. The aspect of the storytelling we didn’t think worked as well was Charles’ direct addresses to the audience which, though few and far between, felt unnecessary and were a jarring use of exposition. Urban deserves great credit, though, for honestly and fairly confronting the complicity of the Catholic Church in the Rwandan Genocide, and he does so through the intriguing characters of the two nuns.

There are moments of brilliant drama in the show, and for the most part it’s moving and entertaining. A first-rate cast bring the story to life. Ben Onwukwe is rock solid as the lead character, creating a dignified and dedicated journalist. Akiya Henry is superb as Sister Alice, the younger of the two nuns, who makes skilful transitions between emotions and leads the audience on quite a journey. Lynette Clarke brings plenty of weight to the senior nun, Sister Justina. Completing the cast are Abubakar Salim as the soldier Paul; and Kevin Golding as Dusabi, the only survivor of the massacre at the church. Abubakar Salim brings a lot of charm to the part of the Tutsi soldier, and, like Akiya Henry, plays with the audience’s sympathies through an understandable thirst for revenge. Kevin Golding’s troubled Dusabi also intrigues.

Design work brings the best in the script. A dividing wall with coloured opaque glass allows the actors to be seen behind it, and rather than sending them to the wings, they remain seated when not on stage, completing the illusion of suspicion and surveillance.

At times troubling, but telling a very human and powerful story, Sense of an Ending with this cast is well worth catching.