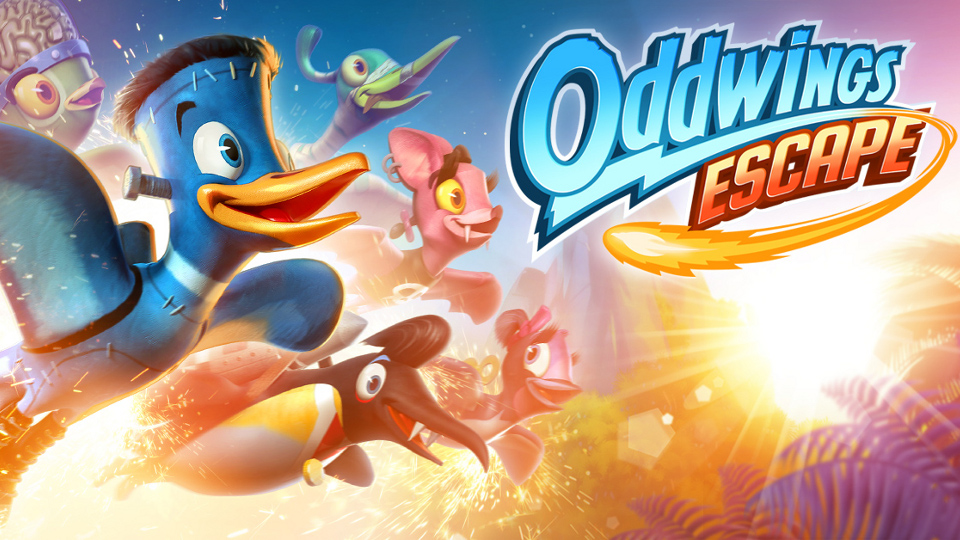 There’s already plenty of choice for avian lovers when it comes to mobile games. Titles such as Flappy Bird, Angry Birds and Tiny Wings have all shown that birds seem to be a great choice when deciding on a main character. Now it’s the turn of Small Giant Games to see if they can replicate that success with their debut free-to-play title – Oddwings Escape.

Mobile games tend to be far simpler than their console counterparts so they are usually pretty light on story. The story here is that the evil Dr. Rooster fancies a shot at flying so he’s decided to capture all kinds of birds and animals in order to conduct an assortment of nefarious experiments on them. He’s doing this in his sinister laboratory high up in the mountains. One bird called Frankie manages to escape and it’s up to you to help him survive and rescue the rest of the Oddwings.

The characters are called Oddwings as it appears that they have already been experimented on. They all have very different appearances, unique abilities and flight dynamics. Frankie is your starting character and as you might have already guessed he resembles Frankenstein. Other characters are initially locked and include Rocky (a penguin with a jetpack), Alex (part bat and part rockstar), Ramses (part Mummy with lightning speed and teleportation powers) and Brainy (slow with telekinesis).

The gameplay in Oddwings Escape is a mix of genres with elements of endless runner, physics and puzzle games. Your Oddwing has a certain amount of energy and will fly along a level. You can guide them by touching the screen in the direction you want them to fly. If they run out of energy then they will glide until they hit the ground and it’s game over. Along the way there are coins and keys to collect. There are also hearts to replenish energy, traps to avoid and special items such as shields and boosts.

You need to tackle a series of missions set across groups of islands. This Saga style map is quite commonplace now in mobile titles and to progress you need to achieve certain objectives. Each mission has three stars to earn by completing tasks such as collecting all the hearts, avoiding all the traps or not crashing into the ground. Later in the game some of these do get rather challenging.

Most missions are quite short and require you to just fly to a certain point. Some are races where you need to finish within a set time limit. There’s an important mission on each island which is an endless event and you are required to keep playing these missions and getting further as set distances help unlock other missions.

Before each mission you can choose which bird to use and also spend coins earned on upgrading their skills in four areas – speed, energy, turning and magnet (for collecting items easier). As missions become more difficult it’s essential that you upgrade your skills. If you don’t have enough coins you can keep replaying earlier missions until you do and there is the option to watch an advert after a mission to double the coins you collected.

One frustrating aspect of the game is that it features a dreaded energy system. This means you only get so many attempts (know as wings) and if you run out you need to wait for them to recharge.

Keys that you collect during missions are used to free the other Oddwings or open up new islands (huge amounts of coins can also be used) but this takes a lot of time. There is also the option of spending real money on in-app purchases to buy large coin or key bundles.

The game looks wonderful and has plenty of social features so you can link it with Facebook and race friends. A neat feature is that you don’t need to always be online to race because the game will pull down ghosts of your friends attempts to race offline. You can also share clips of your attempts to various social media channels.

Oddwings Escape is a fantastic mobile game that is perfect for a quick few minutes as well as longer sessions. It’s an addictive title with a nice variety of things to keep you busy and it will take a long while to unlock everything. It’s perfect for all ages and can also be rather competitive if that’s your thing. If you enjoy endless runners and puzzles games but are looking for something a little different then definitely check out Oddwings Escape.

Oddwings Escape is now available to download on the App Store globally for free.