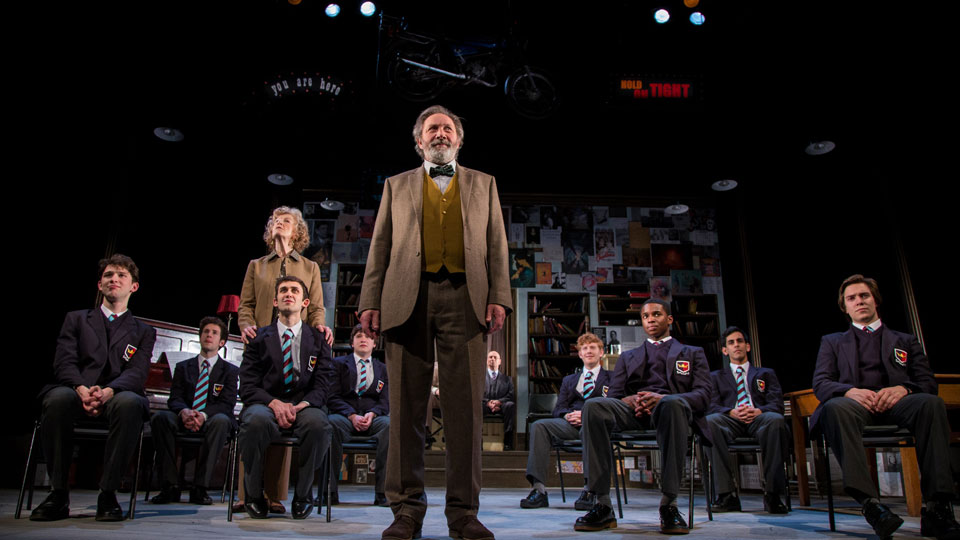 We all know how massively successful the 2004 multi award winning National theatre stage production was- and the 2006 film that followed and the subsequent success of actors who played in it. So Kate Saxon’s production had a lot of live up to in terms of meeting the great expectations of what has now been voted ‘The Nation’s Favourite Play’ . Thankfully this production thoroughly delights rather than disappoints.

The History Boys is all about those formative years at school where we all learn and adopt the standards that shape the rest of our lives. We can all relate to that. Not so relatable, perhaps, is the fact that the plot is about eight Oxbridge Grammar School hopefuls and three of their teachers guiding them through the exam process to get into those hallowed institutions. No matter – as the overriding theme is about how you approach life after childhood, about how to present yourself – truthfully or theatrically but ‘from the heart’, as embodied in the form of much loved anarchic teacher Hector. OR to be questioning the norms and look for fresh, sometimes controversial, perspectives as embodied by young supply teacher Irwin.

Hector (played magnificently by Richard Hope) has a great disdain for the syllabus and the curriculum and convention itself. He espouses liberty and self-expression and a theatrical sense of things being from the heart and a sense of ‘feeling’ (quite literally as things turn out!) It is curious in these zero tolerance days of Operation Yewtree that we view the pupil fondling Hector not as a predator (as indeed the boys do not) but more as a warm, funny eccentric unconventional valued gem of a teacher. He is a one off. We kind of love him and forgive and humour his pecadillo- as indeed do the boys themselves. Despite the pathetic fondlings of boys whilst on his motorbike (and this is as far as it goes) he really does seem to have the boys best interests at heart and they know this and this earns him their love.

Straight-down-the-line educator, Mrs Lintott (astutely played by Susan Twist) is the world weary‘observer’ and realistic ‘voice of reason’ of proceedings and is the polar opposite of Hector’s off-curriculum teaching ways. In contrast to both is the young supply teacher Irwin (the excellent Mark Field) who is specifically brought in at the last minute by the ambitious (“Twat”) of a headmaster to help the boys pass their Oxbridge exams and tries desperately to shake the boys from their competent but ‘dull’ views and opinions. To question, question question – and embrace new perspectives. The boys are therefore given very differing views on how to ‘get on’, leaving us to wonder where they will end up and where their lives will take them.

Alan Bennett’s cosy wit and insight is emasculated and given filthy socks and testosterone here in the form of the teenaged boys. That’s not to say that the characters are realistic- more emblematic of life and its challenges: Sex crazed heartthrob Dakin, the flamboyantly gay Posner, sports lover Rudge etc. They embody youthful sponge like learning and the perils and consequences of choosing their approach on the path of life. Indeed, Bennett illustrates with wit and insight is the long-term consequences of every action and decision – the path of History itself. Whether it is about war, Oxbridge exams or a ‘boy-fondling’ motorbike ride past the local charity shop in full view of the Headmasters wife.

We learn at the end that Hector’s boys do, mostly (aside from Posner who opts out into a sad life of isolation) go on to succeed in conventional careers. However we fear that like their essays for Irwin, they have become ‘dull’. Not only have they lost to ability to question, like Irwin would have wanted them to, they also seem have lost the poetry and feeling Hector meant them to keep. (“Pass the parcel. That’s sometimes all you can do. Take it, feel it, and pass it on. Not for me, not for you, but for someone, somewhere, one day. Pass it on, boys. That’s the game I want you to learn. Pass it on.”) The History Boys is an idealised world portraying stark opposite approaches to History (and life itself) as embodied by Hector and Irwin. Who was right? We don’t know- except that Alan Bennett has given you a new set of challenging questions by which to look back (and indeed forward) and think about your own life.