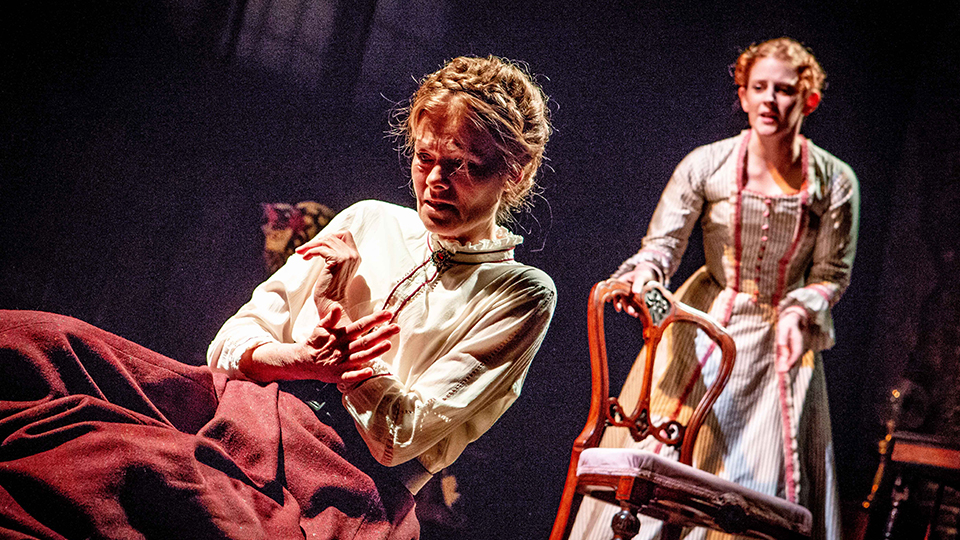 Henry James’ 1898 ghost story novella The Turn of the Screw is notoriously difficult to adapt. It was managed successfully, once, with the 1961 film The Innocents, and there have been notably less fruitful attempts since then. However, Steven Spielberg is producing a big screen updated adaptation, and Tim Luscombe’s 2016 stage play, faithful to the late Nineteenth Century period, is currently embarked upon a major UK tour, starring Janet Dibley as the unfortunate Governess.

James’ story is nuanced and ambiguous. Is the governess protecting innocent children from malign supernatural forces, or is she completely mad and endangering the children through her paranoid delusions? Are the children delightful and angelic, or are they only pretending to be, where they are really manipulated by ghosts? The story can be read legitimately either way, and the suspense is created and maintained by the author’s clever concealment of his hand.

This stage production introduces the Governess (Janet Dibley) thirty years later, lured to meet her former ward Flora (Amy Dunn), to explain the events at her uncle’s country house Bly during her childhood that have traumatised her ever since. This allows the Governess to be played by an older, more experienced actor, but it invites the unwelcome question of why the Governess didn’t recognise her much-loved former ward. Rather than serving as a bookending device to frame the narrative, the ‘present’ story runs parallel to the ‘past’, requiring the audience to keep adjusting to different timeframes as well as locations. The confusion is compounded by having actors double or even triple up on parts, so that Elliot Burton, the only male in the cast, is required to play the Uncle of the children, the child Miles and the ghost of Peter Quint. Consistent lighting helps to root the audience in time and place, but this stifles a more creative approach.

The performances are not unproblematic. Janet Dibley is assured in the conversational moments, but doesn’t fully carry the audience with her as she shifts through the gears to moments of angst or terror. Unsteadiness on her lines unfortunately contributes to the impression that the central performance needs to be much more compelling. There is something unsettling about adults playing children, and it is one of the creative choices that works in support of the creepiness of the story. Amy Dunn and Elliot Burton are at their best as Flora and Miles, but neither oscillates between the juveniles and the other demands of the script especially successfully. Plaudits must go to Maggie McCarthy who is effortlessly warm and endearing as the housekeeper, Mrs Grose. She is also by far the most comfortable with the verbosity of Henry James’ lines.

Coming down so firmly on one side of the text’s ambiguity at the start of the second act undermines the tension that would otherwise be created, but the payoff for the audience in terms of evoking terror is insufficient. The moment has not been earned. Overall, there simply isn’t the conviction in the performances, nor the tension within the script to create and sustain the chilling atmosphere needed for Turn of the Screw to be effective. Without truly nailing the duality of the story and keeping the audience questioning and disconcerted, any adaptation of The Turn of the Screw will inevitably fall flat. Unfortunately, this production falls into that category, with too much working against it to be considered a near miss. There is something of the period of the piece that is captured, but not nearly enough of its spirit.