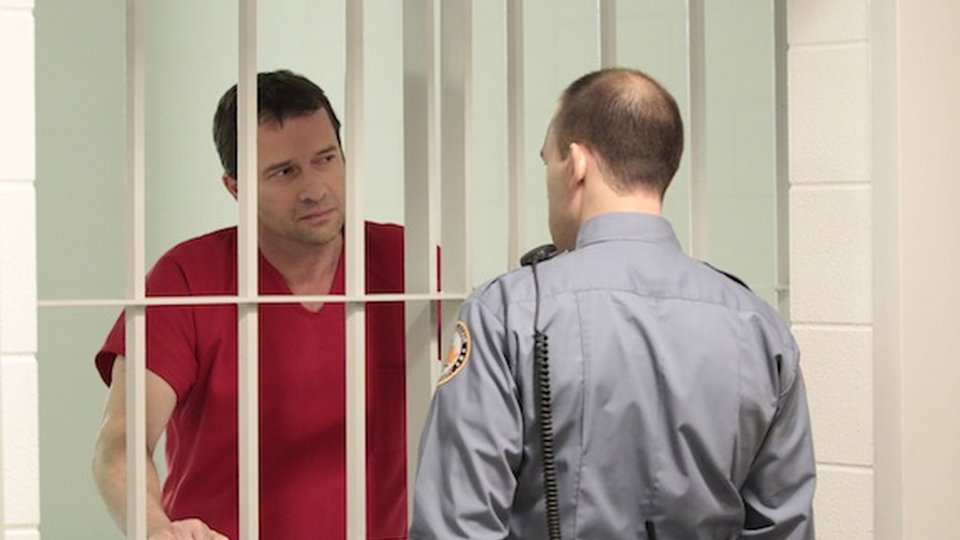 Ryan (Kevin Bacon) became Theo’s (Michael Ealy) next target in the latest episode of The Following.

Ryan in the crosshairs

Theo wasted no time in letting Ryan know who was boss this week. After Ryan had yet another creepy Joe (James Purefoy) dream, he found himself targeted by Theo. First the police pulled him over accusing him of stealing a car, then his credit card was used to buy a boat. Theo upped the terror factor by causing a car crash whilst Ryan was driving with Max (Jessica Stroup) and Mike (Shawn Ashmore). The maniac then called Ryan telling him he could see everything he does and was only just getting started. He also managed to mess with Gwen too putting her job in jeopardy by making it look like she was stealing drugs.

What Daisy did next…

It’s been a little while since we saw Daisy (Ruth Kearney) and it was revealed that she’s taken a job as a waitress in a sleazy nightclub (does no one recognise her considering she’s been all over the news?) During a shift Daisy was approached for a private rendezvous by a patron at his beach house. She took him up on the offer and when he started to get rough with her, she stabbed him in the neck. As she headed downstairs Mark (Sam Underwood) smashed through a glass door and pinned her up against a wall threatening to kill her.

Quick-thinking Daisy used her wits to distract Mark, who told her he was really Luke and that Mark had died, with the news that she could help him get to Mike. She showed him that the cameras in Max’s apartment were still working and she informed him that the laptop had been taken by someone who had continued to watch Max daily.

Mark (as Luke) ordered Daisy to take her clothes off and when she played along and climbed on top of him, his Luke persona disappeared and Mark, and his fear of body contact, returned.

Mike continued to look into the whereabouts of Mark and it was discovered that a laptop was missing from the safe house where Mark had been hiding with Daisy and Kyle (Hunter Parrish). Turning to Max for help, they found that the laptop was in the FBI building leading them to suspect one of their own as a mole. Tom (Gbenga Akinnagbe) overheard the discovery and as Max was trying to pin-point the exact location of the laptop, he went to the locker rooms and destroyed it. That meant the signal cut out and Max and Mike were no closer to finding out who had the laptop.

Theo raided Julianna’s (Anna Wood) office to find a notebook that she had been hiding for Strauss (Gregg Henry) prior to her death. He found it inside a sofa in her office and it was revealed to contain encrypted information. As Theo tried to decrypt the information, he went to a house in New Jersey that he owned and it seems he has yet another secret life.

After failing to break the encryption, Theo tracked down a guard at Joe’s prison and started a conversation with him at a gun range. Manipulating the guard, Theo got him to talk about how his life fell apart after being turned down for the ranger program and convinced him to pay the man responsible a visit. A few moments of torture followed before Theo shot the man in the head leaving his new prison guard friend in shock.

Theo gave him a pep talk and convinced him to use his position as a guard to get access to Joe so he could get a message to him and find out more about Strauss in a bid to decrypt the code. Joe refused to play along killing the prison guard. Earlier in the episode we learned that Theo used to be a student of Joe’s but when Joe tried to reach out to pass that information to Ryan he was ignored.

Ryan eventually turned up at the prison and attacked Joe. During the struggle, Joe stole Ryan’s sunglasses which he tucked under his mattress to use as a weapon…

It’s fair to say that going in to this episode Ryan was skating on thin ice with Gwen (Zuleikha Robinson) following his outburst at her boss but things got even more precarious this week. Firstly Ryan was forced to sleep on the sofa following their row, then he almost turned to drink after a tough day in the office. Thankfully he was interrupted by Gwen who was in the bathroom trying to hide the fact she’d just discovered that she is pregnant.

Tune in to FOX at 10/9c in the US on Monday and Sky Atlantic HD at 9pm in the UK on Saturday. Watch the promo for next episode, Evermore, below: