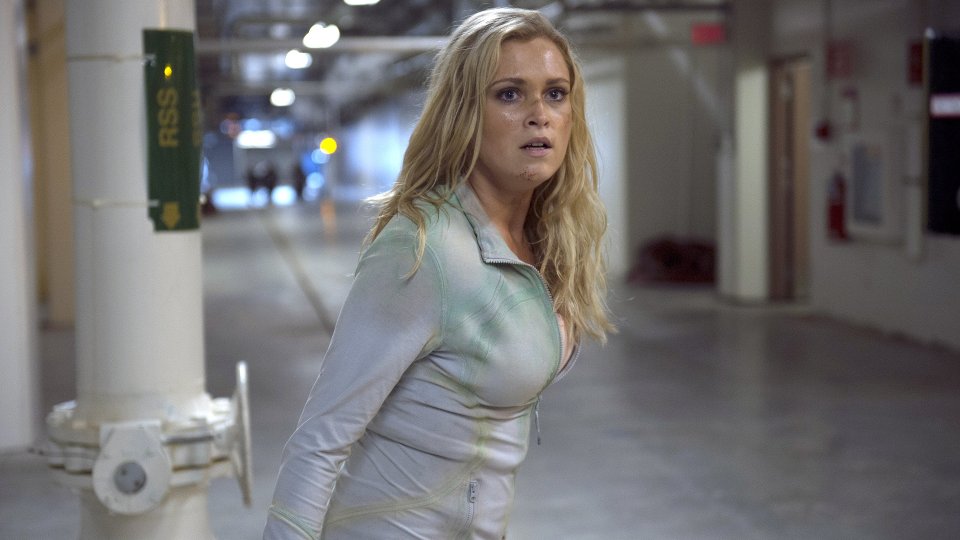 The 100 season 2 came to a close in the UK last night and it asked more questions than it answered.

If you haven’t seen the second season finale of The 100 and want to avoid spoilers we suggest you stop reading now. If you have seen it and want to know our thoughts ahead of the third season keep reading.

Clarke (Eliza Taylor), Bellamy (Bob Morley) and Octavia (Marie Avgeropoulos) stormed Mount Weather and rescued their friends but not without a few deaths along the way. Lincoln (Ricky Whittle) ended Cage’s (Johnny Whitworth) reign by chopping off his hand and injecting him with the Reaper drugs, presumably killing him.

As everyone returned back to the Ark’s camp, Clarke decided she could no longer stay there. She said her goodbyes to Bellamy and left on her own.

Elsewhere in the episode Jaha (Isaiah Washington) and Murphy (Richard Harmon) made it to an island where Jaha found a virtual woman waiting for him, who had the nuclear war head from the missile he used to get to Earth. Murphy meanwhile found a video tape of a man claiming to be responsible for the apocalypse who promptly killed himself after the revelation.

It’s safe to say that things are definitely up in the air as we await season 3 so we’ve put together our list of 10 things we want when the show returns.

1. Clarke’s revenge. If we were Clarke we’d be mightily pissed after being betrayed by Lexa (Alycia Debnam-Carey) prior to rescuing the Ark people from Mount Weather. Not only was Clarke blind-sighted by Lexa, but it looked for a moment there like the two may become romantically involved with Lexa presumably playing on Clarke’s vulnerability to get her way. With Clarke heading off on her own, we’re expecting her to hunt down Lexa for a spectacular showdown.

2. Clarke’s redemption. Once Clarke has exacted revenge, and in some way made up for the many mistakes she made, we would like to see her return to her people and begin her road to redemption. There’s no denying that Clarke went down a dark path trying to do the right thing and alienated a lot of her people in the process by forging a peace agreement with the Grounders.

3. Bellamy and Octavia to lead the Ark people. Both characters showed both mental and physical strength in season 2 and we think they would be a better fit to lead Camp Jaha. Bellamy has grown up a lot and proven his worth with his Mount Weather infiltration whilst Octavia’s mentoring for Indra (Adina Porter) set her up for leadership.

4. Less parent angst. The fight between Abby (Paige Turco) and Clarke for power got a little bit boring fairly quickly. Whilst we understand that Clarke wasn’t happy for her mother to try and take over, we would have expected more of a compromise from both sides. Maybe with Clarke off on her own, Abby will realise they need to work together rather than be constantly butting heads.

5. More Jasper (Devon Bostick) and Monty (Christopher Larkin). We love the bromance with these two and both characters stepped up in season 2. Jasper kicked ass at Mount Weather once he realised what was going on and became a bit of a hero. We want them to have beefier roles for season 3.

6. More characters to join Jaha and Murphy on the island. We’re sure that Jaha’s discovery will turn out to be sinister but we’d like to see some other characters arrive there too. Surely Jaha will need help battling whatever is about to come and we doubt he can count on Murphy.

7. Raven (Lindsey Morgan) to get something to do. She was being tortured at Mount Weather last we saw her and season 2 was rough for Raven with Finn’s (Thomas McDonell) death and being shot. We like Raven and hope she is a little more integral with the main group of characters in season 3 rather than being the tech help on the side.

8. Murphy to die. Seriously does the character have 9 lives? His bad boy behaviour has served the show well but we wouldn’t be sad if the character got killed off. Now he’s helped Jaha, his purpose feels finished so a suitably grisly death is in order.

9. Octavia and Lincoln to get their relationship back on track. The love birds were pulled apart in season 2 and we hope in season 3 they get the opportunity to really rekindle their romance. We absolutely ship these two and hope there’s a happy ending in sight for them.

10. More jaw-dropping twists. Hands up who didn’t gasp when Clarke killed Finn? We weren’t expecting that moment at all and we hope season 3 continues to deliver the unexpected.

Advertisement. Scroll to continue reading.
In this article:The 100