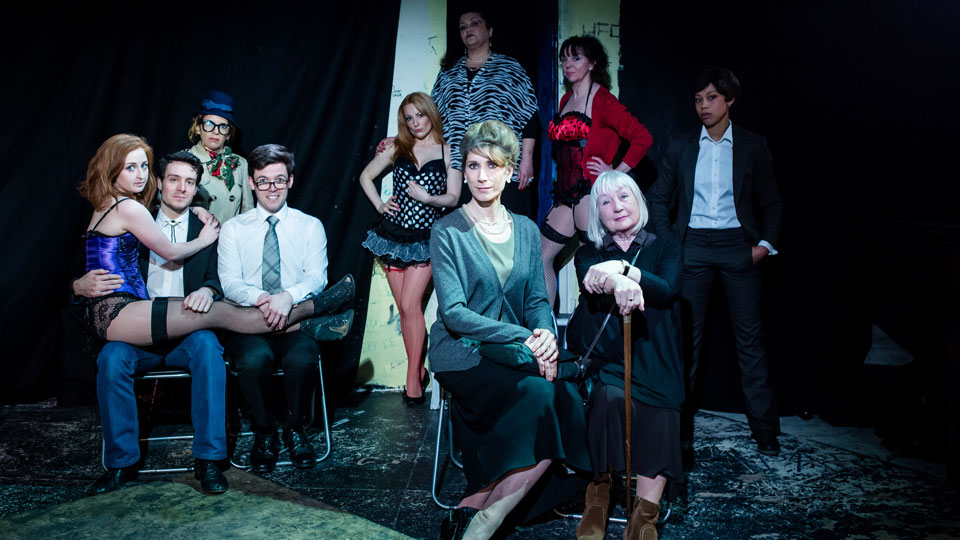 Rumpy Pumpy!, now running at the Landor Theatre, tells the remarkable true story of two genteel ladies from the Hampshire branch of the Women’s Institute who take it upon themselves to campaign for better conditions for working girls and the legalisation of prostitution. Through musical form, Rumpy Pumpy! is a charming and very English comedy of manners, with a good social conscience at its heart.

There is a lot to like about the musical. It’s heart-warming, and its plea for justice and social change is impassioned; but every aspect of the production, from the script through to the performances, is rough around the edges. There’s nothing wrong with staging it with minimal production values (only a few chairs and a prop telephone adapt to multifarious settings), where excellent and ever-changing costumes create most of the effect – it lends Rumpy Pumpy! the home-baked feel of a WI scone. However, bare staging requires a tight performance to be effective, and it’s here that Rumpy Pumpy! falls short.

The standard of acting from a relatively large cast of ten varies considerably, but all of the actors need to be quicker on their cues and more confident of their lines. A few hiccoughs are forgiveable, but a performance saturated with them smacks of amateurishness. Sadly, it wasn’t just the actors who were slow on their cues. Mandi Symonds (who gives a loveable performance as Holly, the proprietress of a brothel) had the unenviable headache of consistently late cues for a ringing telephone to contend with throughout the evening.

Barbara Jane Mackie’s script is similarly hit and miss. For a story that justifiably pleads that we shouldn’t stereotype working girls, it then goes on to create characters with extremely broad national stereotyping (Texans, Dutch, New Zealanders…) It also loses its effectiveness by removing the two ostensible leads – WI women Jean and Shirley (Valerie Cutko and Marjorie Keys) from much of the action. As soon as they have they become involved with the British brothel owned by Holly (Mandi Symonds), they go on a globe-trotting adventure, introducing us to far too many fleeting characters, whilst the story of Holly and her girls evolves independently. Focus on one story would have been far more effective and emotionally engaging, regardless of whether or not that’s what really happened. The dialogue is often far too on-the-nose, and whilst aspects such as the religious hypocrisy of Christian zealot DC Hecks (Joanne Sandi) are creditably highlighted, it’s too overblown to ever really be effective.

The songs of Rumpy Pumpy!, played live on piano, are generally quite enjoyable, which gave us the nagging feeling that a lot of the dialogue should be cut and the songs better-used to carry the story. Mandi Symonds makes a show-stopping singing entrance with If You Wanna Get To Heaven, one of the musical highlights; whilst the production hits all the right notes during the sleazy number Red Bull and Cigarettes: but these moments of brilliance don’t sustain.

There are some lovely performances to enjoy in Rumpy Pumpy!. Katie Meller is extremely sympathetic as Mags, commendably eschewing self-pity as an older working girl facing domestic abuse problems. The three actors playing the younger prostitutes (Jennifer Harding, Scarlett Courtney and Ria Ulleri) are the best thing about the show, and they work brilliantly together, with Harding especially impressive in a rich variety of roles.

Undoubtedly, Rumpy Pumpy! will find its audience and have an appeal. For us, it lacks the strong narrative drive of similar tales of British pluck, such as The Fully Monty and Calendar Girls, to which it draws some comparisons. This production, whilst boasting some strong elements and good performances, feels under-rehearsed; but it’s always possible that it’ll find its feet, smooth out the rough edges, and bring the best out of a not-unproblematic script further into the run.