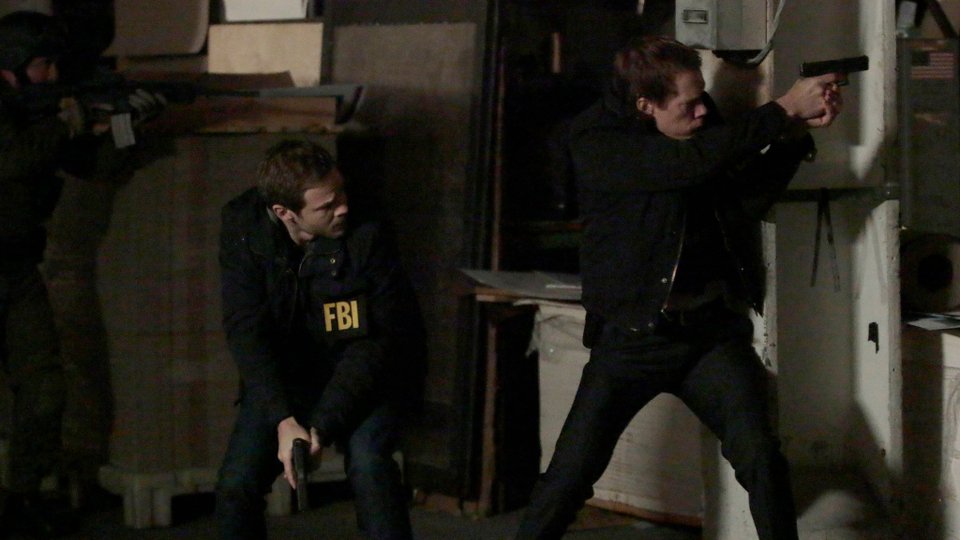 Ryan Hardy (Kevin Bacon) remained two steps behind as he tried to find Arthur Strauss’ (Gregg Henry) best student in the latest episode of The Following.

If you haven’t seen the latest episode of The Following and want to avoid spoilers we suggest you stop reading now. If you have seen the episode and want to relive all the action keep reading.

Thanks for nothing Joe

Ryan and Joe (James Purefoy) came face-to-face again this week as Ryan tried to get information out of his nemesis. Never one to give anything easily, Joe avoided Ryan’s questions but eventually admitted that he didn’t know the identity of Strauss’ best student and that the good doctor rarely let his students mix with one another unless it was absolutely necessary. It was also confirmed that Joe’s execution is looming imminently…

All signs point to Luis

Theo (Michael Ealy) led the US Marshalls taking Duncan (Tim Guinee) to prison into a trap. Quickly murdering them, Theo released Duncan but told him he was only doing so for his help, not because they were friends. In a bid to cover up his tracks, Theo went after Luis (Manny Montana), the man who helped create the fake passports for Strauss. They tracked him down to his apartment building but missed him by seconds. Instead they got sass from his friends, which resulted in a blood bath.

Ryan and Mike (Shawn Ashmore) caught wind of the Luis connection and arrived at his apartment building to find his friends murdered but no sign of him. They located the address of his girlfriend but when they arrived there she was found dead in bed and there was no sign of Luis. Moments earlier Duncan had killed the woman and knocked Luis out before abducting him.

Duncan and Luis arrived at a warehouse where Luis was storing all the evidence he had on Strauss and Theo. Duncan burned it all and was interrupted by Ryan and co who had managed to find them. A shootout ensued leaving Duncan for dead, Ryan injured and Luis in FBI custody.

Max (Jessica Stroup) returned to work and struggled with her injuries. Assigned to desk work, it wasn’t long before Max convinced her superiors to let her go out into the field. She had tracked down the hacker to Manitech, the security firm that deals with the FBI’s firewall, and took a colleague with her. Once there it was revealed to us that Theo works there and when he caught wind that Max was onto him, he planted evidence on Peter Collins’ (Ross Gibby), a colleague, laptop to frame him.

Max found the planted evidence and arrested the wrong guy. Placing the building on lockdown and sending everyone home, Max was surprised by one of the firm’s interns who claimed he was having an affair with Peter and showed her a photo proving they were together the day he was believed to have hacked the servers. Max asked the intern to help her find out who the real hacker was but no sooner had they started than the server went down. Off into the server room the intern went and was promptly offed by Theo.

Max went to look for the intern and found his body. Prior to the lockdown she had bumped into Theo but suspected nothing. Now she was trapped in the darkness of the office building with Theo ready to pounce and kill her. Luckily for Max she called for backup and they arrived just in time.

Ryan sent Max a copy of a document they found at the warehouse that featured Manitech head Tucker Myers (David Furr) on a fake passport. Left confused, neither thought he was really responsible and they have no idea how right they were as Tucker was paid a visit by Theo and we’re pretty sure it didn’t end well.

99 problems and Mike Weston is one…

Mike spent much of the episode getting passive-aggressive comments from Max’s boyfriend Tom (Gbenga Akkinagbe). The tension between the two is building and we’re beginning to wonder if he’s ever going to reveal that he knows about Max and Mike’s indiscretion?

As Theo returned home to his family once again, Ryan found himself dreaming of getting drunk with Joe and playing pool. It seems that the serial killer mastermind has worked his way back into Ryan’s head once again.

Tune in to FOX at 9/8c on Monday in the US and Sky Atlantic HD at 9pm on Saturday in the UK to see the next episode. Preview Flesh & Blood below: