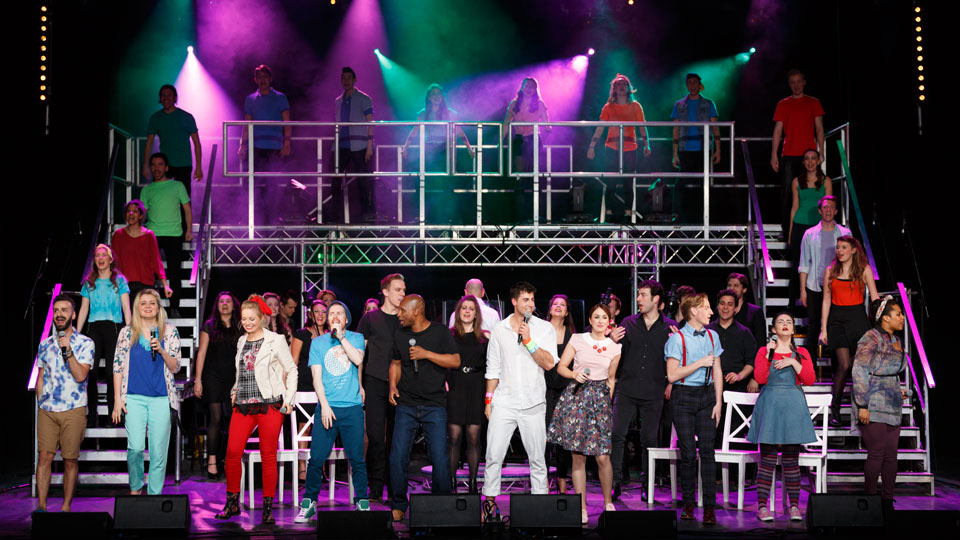 Popular ‘70s musical Godspell gets an update for a new generation with this concert version, which scores with some revamped musical numbers but misses the mark just about everywhere else.

The original musical is a series of parables, interspersed with song – and that’s pretty much what you get here. Painfully unfunny dialogue combined with serious scenery-chewing is thankfully punctuated by genuinely good music and vocal performances. If the production was brave enough to truly offer a ‘concert’ experience, it would be a much more attractive proposition.

There are some fine voices here, ably supported by a local community choir which changes with location. The more cynical theatre-reviewer might consider this as a sure-fire way of selling more tickets to local families of those on stage, but the choir here really adds to the proceedings and brings energy and strong harmonies to the show’s biggest songs.

As mentioned, the vocal talent on stage is pretty fantastic. The Voice triumphs over The X Factor as the former’s Leanne Jarvis displays an incredible range and Mitch Miller shares soaring, soulful vocals while the latter’s Andy Abrahams is in fine voice but his over-the-top acting is definitely playing to the gallery.

But it’s probably not fair to single out poor Andy, when the acting across the board is uniformly toe-curling. Matters are only made worse with cringe-inducing audience participation with theatre-goers reluctantly dragged on stage to partake in Pictionary and Charades, which are even less entertaining than when suffered with your own family at Christmas.

Like an odd mix between Sunday school improvisation and a (decent) musical revue, the show simply doesn’t work. If only Godspell in Concert stuck more closely to its title, it might have more chance of success.