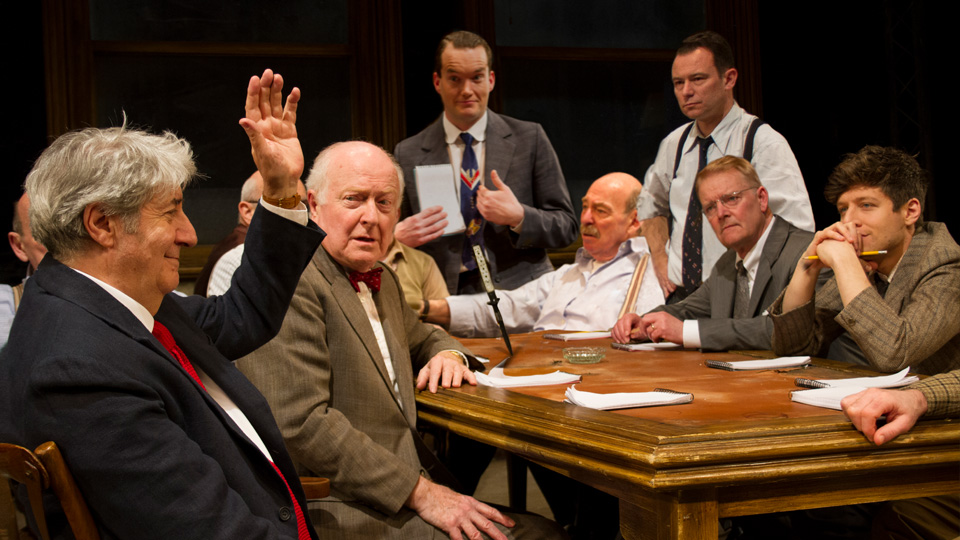 Direct from the West End, Twelve Angry Men transfers to Leeds Grand Theatre this week as part of a national tour.

Developed from an American teleplay into a highly successful motion picture starring Henry Fonda, Twelve Angry Men is the story of a New York jury as they debate the verdict of a boy accused of patricide. The evidence is overwhelming and the majority of the jury initially consider the boy guilty, until one juror raises a shadow of doubt which swells into a fierce deliberation. Motivated by prejudice, intolerance, claustrophobia and growing fatigue, attitudes and instincts collide with the life of a youth at stake.

There is no shortage of trial drama in theatre, with Agatha Christie potboilers such as Witness for the Prosecution proving popular with seasoned audiences. There is, however, a structural stumbling block with court room theatre; too often the narrative is dictated and punctuated by the structure of court proceedings, often stilting conflict with demands of “order” and “objection”. Fortunately, Twelve Angry Men is not one of those shows and the play is strictly concerned with the aftermath of court presentation, providing the audience with the private view of the unique battles which ensue when a jury are asked to deliberate their verdict.

Reginald Rose’s script originated as a teleplay in the 1950s and its modern stage interpretation retains much of the intimate intensity which live television was famous for. Written theatrically for the small screen, the tensions of the piece translate perfectly to stage, exploiting a claustrophobic setting with richly written characters and clearly defined personas. As an group in conflict and confinement, there is often a danger for an ensemble to feel overly antagonistic, but the twelve angry men depicted in the play are anything but; there is a genuine evolution of thought as the jurors’ viewpoints twist and turn over insecurities of the evidence. There is indeed anger, but it is not relentlessly sustained and indeed the anger emanates from back-story, as character’s histories become clear.

Casting is wholly excellent and crucial to the success of this piece, with an ensemble boasting a spectrum of individuality and texture. Tom Conti provides a sage liberalism to his character; there is a gentle, slightly shuffling style – something of the sensitive elder statesman – which endears his viewpoint to the audience as much as the characters on stage. Andrew Lancel, as Conti’s counterpoint, is a wonderful study of subdued agony, wrestling with a burning torment which comes to the fore in a confession which is agonisingly heartfelt. In a smaller role, Alexander Forsyth represents the youth in a room of dominant elder voices and his haunted anxieties are movingly underplayed. A favourite in this performance is Denis Lill who adopts the role of a bigot without descending into the flat dimensions of bullish ranting; Lill provides a depth of character with such rich intensity he often steals every scene, provoking hilarity in his absurd temper and outright disgust with his intolerance. It is a character which is somewhat writ large but honed beautifully with performance detail, right down to him suffering a streaming cold. Though the cast is large and universally male, the actors have been impeccably directed by Christopher Haydon, allowing each of their talents to sing through a chorus of voices with independent clarity. It is a rich cast where each audience will take favour in different characters; a sure sign of fine writing, direction and colourful performance.

The show is innovatively staged, showcasing a revolving set that defies belief with movements that are indiscernible, providing a full 360 degree view of the debating table. The growing intensity of heat and rainstorm are evocatively presented with sound and on-stage rain which intensifies the conflict to electrifying levels. Simply put, the design is delicious and extols a fifties flavour throughout its landscape.

Twelve Angry Men is a successful adaptation and insightful period piece which is also highly engaged in today’s political concerns. Wholly absorbing and occasionally unnerving, it is drama written with guts and grit, directed with a modern aesthetic and produced with astonishing production value. It is an impassioned peace, fueled by a masculine arrogance and anxiety whilst intensified by conflicting politics which will resonate with a modern audience. A microscope upon the best and worst of male-dominated Fifties society, Twelve Angry Men defines what modern theatrical drama should be; boldly standing behind its convictions and holding court from beginning to end.

Twelve Angry Men is at Leeds Grand Theatre until Saturday 11th April before it transfers to Grand Opera Theatre York until 18th April. For a full list of engagements visit www.kenwright.com.