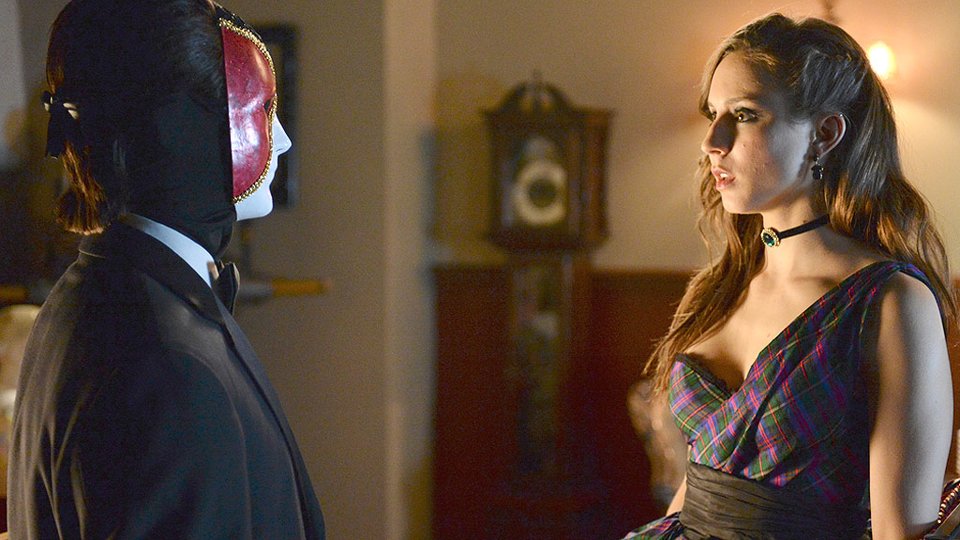 The #BigAReveal took place nearly two weeks ago on Pretty Little Liars as season 5 of the hit ABC Family show came to a close.

If you haven’t seen the fifth season finale Welcome to the Dollhouse and don’t want any spoilers we suggest you stop reading now. If you have seen it and want to relive all of the action then keep reading.

Welcome to the Dollhouse saw Aria (Lucy Hale), Spencer (Troian Bellisario), Hanna (Ashley Benson) and Emily (Shay Mitchell) kidnapped by A on their way to prison. Locked in a bunker containing recreations of their individual rooms, the liars discovered that Mona (Janel Parrish) wasn’t really dead and that the person terrorising them was called Charles.

It’s up in the air a little as to who Charles is but the suggestion in the finale was that he’s Jason’s (Drew Van Acker) twin brother. Fans are going crazy coming up with theories but the video Spencer watched definitely supports the twin theory.

As the season drew to a close the five girls made it out of the bunker only to discover they were still trapped and very much part of A’s (or should we now say Charles’?) game.

Ahead of the show returning for a new season this summer we’ve put together our Top 10 hopes for season 6.

1. Answers. The Charles reveal divided fans with some hailing the twist as a great surprise and others complaining that PLL creator I. Marlene King had misled them for 5 seasons. King has promised that the ‘why’ part of A’s game will be revealed and the whole A mystery put to bed in the first 10 episodes of the new season. Do we believe her? Not really but we hope that we learn all about Charles and that he is someone we have seen in the show before as the writers keep telling us he is.

2. The Bethany connection. It looked like we were getting somewhere earlier in season 5 with the Bethany Young storyline but it hasn’t been fully resolved yet. We know that Melissa (Torrey DeVitto) buried her body thinking she was covering up for Spencer. Who is Bethany and how does she fit into the larger puzzle? We’re hoping this is addressed along with the Charles storyline.

3. Who killed Mrs. DiLaurentis (Andrea Parker)? We’re still none the wiser as to who actually killed Mrs. D. Are we to assume that it was Charles? Did Charles also kill Bethany? If so why? There’s got to be a big twist in there somewhere and hope it’s delivered in season 6.

4. Plenty of Mona. Now we know she’s not dead, and we suspected she may not be, we want plenty of Mona action in season 6. She clearly knows a hell of a lot more than anyone else about what’s actually going on and we hope she’s going to cause plenty of mayhem too.

5. An Ezria reunion. OK so we know that the original Ezra (Ian Harding) and Aria storyline bordered on the wrong and creepy but we still like them together as a couple. We can understand why they took a break but we hope that they find their way back to one another in season 6. We’ve got everything crossed for a happily ever after…

6. A big Andrew (Brandon W. Jones) reveal. Clearly Mr Campbell is up to something but we’ve no idea what yet. Some fans believe he could be Charles but we’re not buying it. Maybe he’s helping him but we don’t think he’s the person at the helm of the operation. A showdown with Aria would be pretty epic don’t you think?

7. More screentime for fan favourites. We didn’t get a whole lot of face time with CeCe (Vanesa Ray), Melissa, Lucas (Brendan Robinson), Noel (Brant Daugherty) or Jason (Drew Van Acker) as we would have liked in season 5. They’ve all been pretty integral to what’s been going on from the start so we want them all back in a big way. (On a side note maybe we’ve not even really met Jason and the Jason we know is really Charles?)

8. The return of Paige (Lindsey Shaw). We were kinda bummed when Paige left Rosewood, especially when Emily moved on with Talia (Miranda Rae Mayo). We know not everyone is a Paily fan but we are. Some fans are sure she’s been something to do with the A plot but we think she’s an innocent bystander.

9. Alison (Sasha Pieterse) to be reintegrated with the liars. Considering she returned from the dead, Ali didn’t play a particularly huge part in most of the second half of season 5. Now that her friends know she’s innocent, we want them to try regroup. Maybe Ali can team up with the Hastings to locate the liars and save the day?

10. Bigger roles for the liars’ boyfriends. Caleb (Tyler Blackburn), Toby (Keegan Allen) and Ezra were a bit underused in season 5. Toby in particular disappeared for episodes at a time and Spencer’s infidelity has yet to be broached. We like that the three characters are interacting more and working together and we hope that continues.

Pretty Little Liars will return to ABC Family in the US and Netflix in the UK this summer for its sixth season.