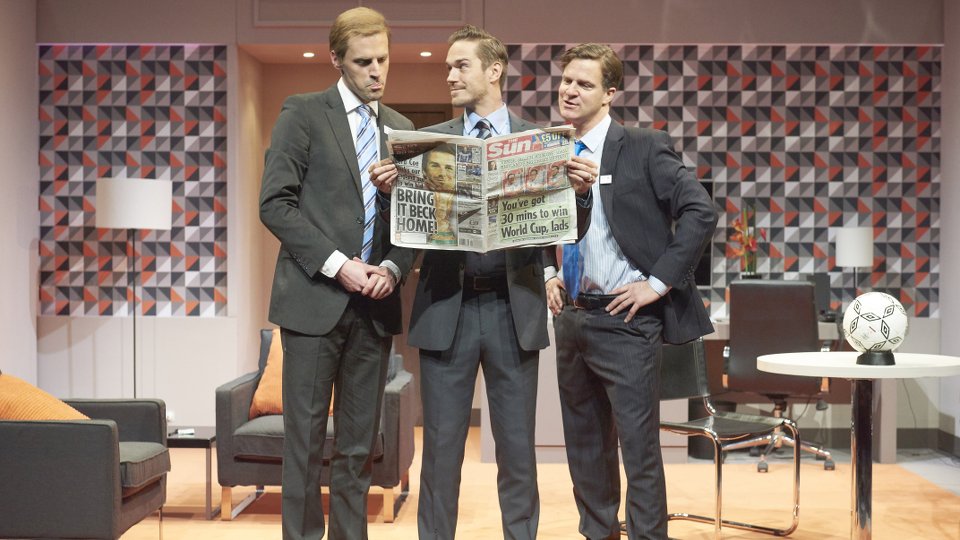 The night before the bid to host the FIFA World Cup David Cameron (Dugald Bruce-Lockhart), David Beckham (Séan Browne) and Prince William (Tom Davey) met in a hotel room to fine tune their pitch. The coming together of three of the most recognisable men in the world is the premise of William Gaminara’s play, which debuted at the Edinburgh Fringe back in 2013. Since then the show has gone on to receive widespread critical acclaim and is playing a limited season at London’s St James Theatre.

Based on fact, The Three Lions is a hilarious satire and comic reimagining of what really happened between Cameron, Beckham and William on that night. The action unfolds in the hotel rooms of the three men starting with Cameron struggling to get a room thanks to an error in the booking process. Accompanied by trainee assistant Penny (Antonia Kinlay), Cameron hangs out in Beckham’s room whilst the mistake is rectified.

The Three Lions knows how to entertain its audience. The humour is sharp with the jokes delivered fast and furious. Each of the characters is a larger-then-life representation of the public figures we know with each of the actors perfectly capturing the mannerisms, expressions and voices. Cameron is an overly confident master of spin, Beckham is charming but dim, and William is a man who relishes the opportunity to let out his childish side frequently.

There are running jokes throughout the play such as the off-stage appearance of Boris Johnson who gets a little carried away at the hotel bar and Beckham’s wife Victoria who is hellbent on getting invited to William and Kate’s wedding. They provide nice little touches to the production and plenty of laughs.

All of the actors in the show are superb with the three leads bouncing off each other. Dugald Bruce Lockhart gives a standout performance as David Cameron perfectly capturing the Prime Minister. He is particularly strong when the show’s second half turns into a farce and he showcases a real knack for physical comedy. Séan Browne looks so much like David Beckham that it’s easy to believe you’re watching the real thing. He captures his voice and trademark phrases such as ‘at the end of the day’ presenting the footballer as a loveable idiot coming out with some hilariously ridiculous lines. Tom Davey provides comedic support as Prince William drawing out the mischievous side of his character and having a lot of fun with it.

Ravi Aujla and Antonia Kinlay deserve special mentions too. Aujla is hilarious as twin hotel attendants Vikram and Ashok, often getting some of the biggest laughs in the show, whilst Kinlay is magnificent as Cameron’s star-stuck trainee assistant with a bit of a thing for Beckham.

The Three Lions is hilarious from start to finish. Despite a slightly over-long second half, the production maintains a snappy pace under the direction of Philip Wilson. Gaminara’s script is full of witty observations and lovingly pokes fun at the characters. The Three Lions excels thanks to its stellar cast and it’s a show that could enjoy a very long run both as a touring production and as a West End staple. We haven’t seen a show this funny for a long time and when we left the theatre our sides were aching from laughing for the majority of its duration.