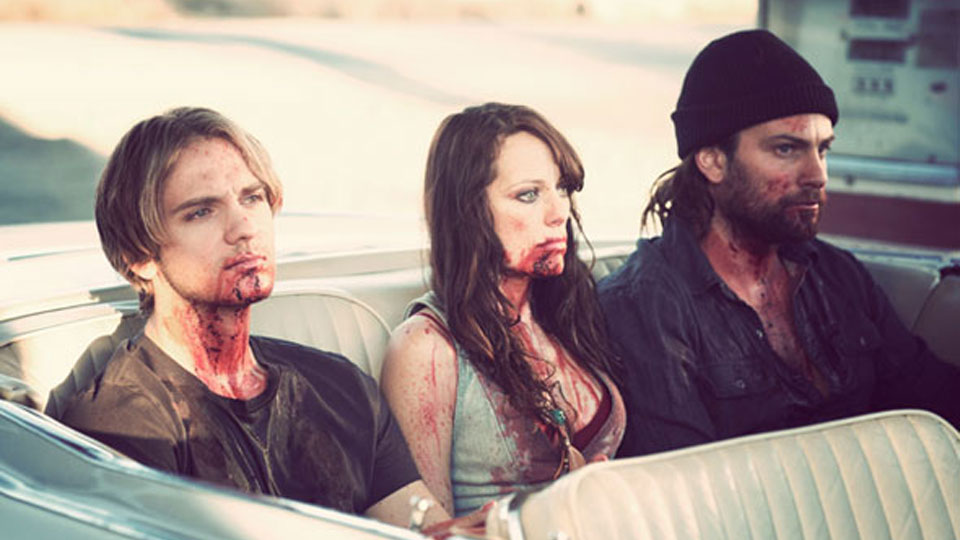 The Hamilton family return under the new name The Thompsons. The vampire family find themselves in England seeking out the Stuarts, another group of blood drinkers that can help them rebuild their lives after having to flee America following a bloodbath. Francis (Cory Knauf) is the first of the family to locate the Stuarts in Ludlow and soon finds that the family may not be all they seem. With their daughter Riley (Elizabeth Henstridge) as his only ally, Francis must discover what the Stuarts are up to before the rest of his family become their latest victims.

The Thompsons is the sequel to the 2006 cult classic The Hamiltons and enjoyed its UK premiere today at Frightfest with the producers and many of the cast in attendance. The budget for this sequel has clearly been upped and the production looks fantastic. Mixing drama with elements of horror, The Thompsons follows the template laid out byThe Hamiltons providing a satisfying progression for the characters. The main focus of the movie is Francis with his siblings playing secondary characters. From the opening scene where we see him trapped in a box, he tells the story of his encounter with the Stuarts recounting the bloodbath in America that forced his family to flee from the authorities.

The initial scenes with the Stuarts are fantastic. Francis enters a quiet pub in Ludlow and is immediately but unknowingly acquainted with Mother Stuart (Selina Giles), Father Stuart (Daniel O’Meara) and their beautiful daughter Riley. Francis reveals himself to the family when he panics and kills a constable who recognises him. It’s not until Riley’s brothers Cole (Sean Browne) and Ian (Tom Holloway) return that Francis realises that he’s stumbled upon the family he’s been looking for. The build-up to the two families meeting is the main hook of the movie and as Francis gets in too deep, his siblings start to flock from far and wide to join him.

The performances across the board are stellar. Cory Knauf carries the weight of the Hamiltons as Francis. He gets the most to do and certainly the most screen-time. His performance is subtle yet captivating and he makes for a convincing lead. His immediate chemistry with the gorgeous Elizabeth Henstridge is electric and the two actors spark off one another. Sean Browne, who we recently saw on stage in The Great Gatsby Musical, pops up in the supporting role of Cole Stuart – the ruggedly handsome brother of Riley. After seeing him play such a charmer on stage it’s fun to see him play the complete opposite in this movie. He makes quite the impression and we’d like to see him take on even meatier roles in the future. Also worthy of note is Selina Giles who is fantastic as Mother Stuart. She effortlessly moves from lovely to nasty as the matriarch of the Stuart clan.

The only disappointment really is that the wonderful Samuel Child doesn’t get a whole lot to do. In The Hamiltons he was superb and had a much larger part and we wish he’d had a bit more to sink his teeth into in this movie. Child is a superb actor and the small screen-time he gets is an injustice. Similarly Mackenzie Firgens and Joseph McKelheer are underused as the troublesome twins Darlene and Wendell.

The Thompsons is a worthy successor to The Hamiltons and despite the 6-year wait, it’s a triumph for The Butcher Bros (aka Mitchell Altieri and Phil Flores). With a strong cast, a refreshingly original storyline and some seriously good fight sequences, The Thompsons has been our highlight of Frightfest so far. It also puts paid to the recent depiction of vampires as romantic desperados (a la Twilight) and takes them back to the raw primal instinct of feeding off humans to live. Fingers crossed the Hamiltons return in a third instalment soon.