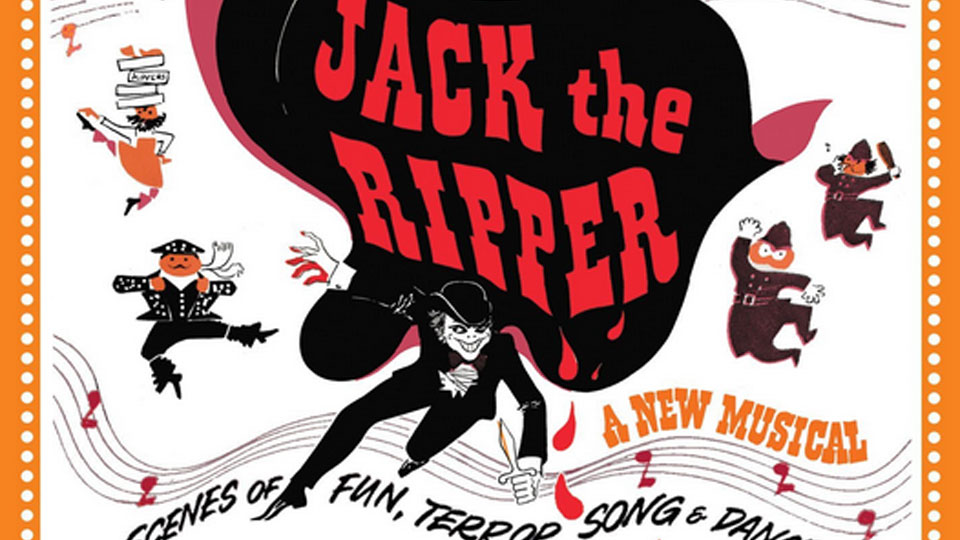 Stage Door continues their commitment to releasing lost gems of British musical theatre with Jack The Ripper, which follows on from their new print of the popular Worzel Gummidge The Musical earlier this year.

The Jack The Ripper musical came to the London stage in 1974, the brainchild of actor Ron Pember and Denis De Marne. It celebrates music hall tradition and one of the great London legends of the late Victorian era – unconvicted serial killer Jack the Ripper, who brutally murdered prostitutes in the Whitechapel area in 1888. The chirpy, Cockney knees-up music sung by bawdy men and women of the night is an oddly unsettling way of telling such a sinister tale, though it does key in to the British way of seeing humour in everything and using mockery as a weapon.

The original London cast recording, digitally remastered from the master tapes for this release, was set down in 1975, but has remained unreleased in the intervening four decades. This is the first opportunity to hear a recording of the rarely-performed musical.

As a piece of music, Jack The Ripper succeeds in presenting seventeen tracks of entertaining melodies, though the relentless singy-songy nature of the music hall style may grate after a while, depending upon taste. If you enjoy music hall, tracks such as Saturday Night, in which the best part of the week is celebrated; Suspects, a hilarious look at the possible identities of the ripper, and Ripper’s Going To Get You – a comic upbeat song about violent murder – will more than satisfy and raise a few laughs. The performance style is suitably over the top, with loud, brash vocals rendered in thick East End accents rather than refined melodies. Nevertheless, there are moments where the revelry and melancholic dreams of the prostitutes achieves poignancy evocative of the much later Les Miserables.

The weakness of the musical is that it doesn’t quite tell a solid story in which the audience follows a group of characters and identifies with their wants and needs, but presents a series of snapshots of the residents of Whitechapel, so it isn’t as dramatically exciting as it might have been. The Ripper doesn’t become a character in his own right, which adds to the mystery but makes for expositional storytelling. Whilst it’s certainly entertaining and diverting, taken as a theatrical experience as a whole, it’s possible to see why Jack The Ripper didn’t enjoy West End longevity.

There are fine performances, mostly comic on the part of the men, but it’s Terese Stevens who brings moments of heartrending intensity into the songs as the ill-fated Marie Kelly. Step Across The River is a showstopper, with Stevens joined by a chorus of women, led by Eleanor McCready. There is a touch of high drama with the ominous sound of Look At Them, whilst Goodbye Day, with echoes of Gershwin, is another fine showcase for Terese Stevens’ talents.

There are better musicals, but we applaud Stage Door’s zeal in preserving part of our musical theatre heritage, and this recording will be adored by lovers of the lost art of London music hall. If you like a good knees-up, and a comic celebration of the sleazy side of Victoriana, Jack The Ripper is sure to entertain.