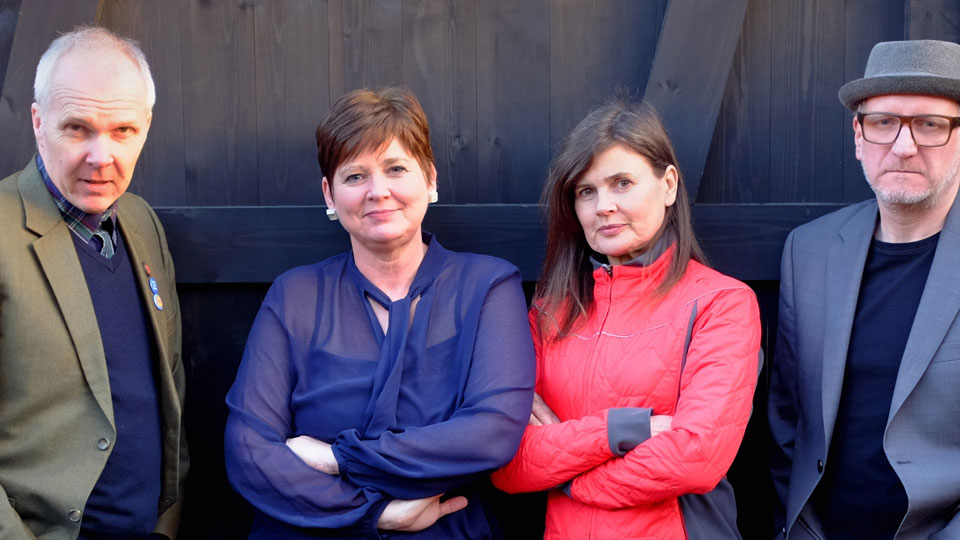 We speak to Clare Eden, the producer of a brand-new sci-fi comedy venture by Trev and Simon that features popular Doctor Who-star Sophie Aldred.

Clare previously produced the award-winning sonic movie The Minister of Chance, which was pioneering in its field. New project Strangeness in Space will also be crowd-funded and free to download, and with scripts by Trev and Simon, it’s sure to raise plenty of laughs.

Clare spoke to us to tell us a bit more about the project, such as where the idea came from, how the team all know one another, and how you can get involved in the funding of it!

What can you tell us about Strangeness in Space?

It’s a comedy sci-fi audio adventure written by and starring Trev and Simon, along with Sophie Aldred and a stressy robot called Lemon! It’s made with the flavour of those Saturday mornings TV shows that Trev & Simon were so brilliant in, and appealing to adults and kids alike. Both Sophie and I laughed out loud when we read their first drafts!

Did Trev and Simon pitch the idea to you, or the other way around?

Sophie and Simon both played guest roles for us on The Minister of Chance, my last podcast project, and we were guests at BritSciFi last Spring. We were also all at University together and as I watched them sharing memories of us all working together, in the audience Q&A in Leicester , I had one of those light bulb moments. We then all met for our Manchester Uni Drama Department reunion in May and at a very hung-over breakfast the following day, I suggested we put something together and T&S came up with the brilliant idea of Strangeness in Space!

Can we anticipate that the series will have the quirky humour of Trev and Simon?

Oh yes…. in all its glorious nonsense and wit! I love that they do know how to pitch it for everyone…

What’s the wonderful Sophie Aldred’s part in it?

She’s the one who means they have a chance of surviving in space!

It sounds like a similar Kickstarter fundraising campaign that was used to finance The Minister of Chance, which was a pioneering project; but is there anything you’ll do differently this time?

The Minister of Chance was terrific fun, hugely satisfying and a very sharp learning curve!!! I am immensely proud of what we achieved in MoC, especially as it was so pioneering – the whole concept of downloading drama in this way was a novelty when we started five years ago and I can already tell that the temperature has changed… People are more understanding of this as a genre and more engaged by its possibilities, and there is a much richer tapestry of material available now! The more the better! And crowd funding is more easily understood now too it seems; there’s a plethora of quality projects on those platforms now and I think people have realised how much fun it can be to get involved and feel a sense of ownership in something as it develops.

Clare Eden with Trev & Simon and Sophie Aldred in Strangeness in Space.

Will there be perks for fans funding the project?

Do you anticipate any crossover with the fan base for The Minister of Chance and Strangeness in Space?

I hope there will be… the community round MoC is still so strong and I love that so many of them are still in touch with me on social media – I’m definitely hoping to emulate that sense of belonging on this too. It’s hard work being on a low budget project and if you can feel the fans behind you it can be really uplifting; fuelling you on!

The Minister of Chance attracted quite a lot of big-name guest stars. Are you hoping Strangeness in Space will go the same way?

I was an agent for many years… one thing I learnt early on is that if an actor likes a script and thinks it will be fun to work on, they may well say yes if you ask, so go for it! I know we had a reputation amongst the cast for making MoC a pleasure to work on and I’ll be trying to do the same on this; yet again we have a core team of thoroughly decent chaps and a script we believe in so I’m hoping that’ll translate to our first choice cast on this too!

You can find out more about Clare’s project Strangeness in Space and how you can get involved by visiting the website: http://strangenessinspace.com/ and follow on Twitter @Strangeness_in.