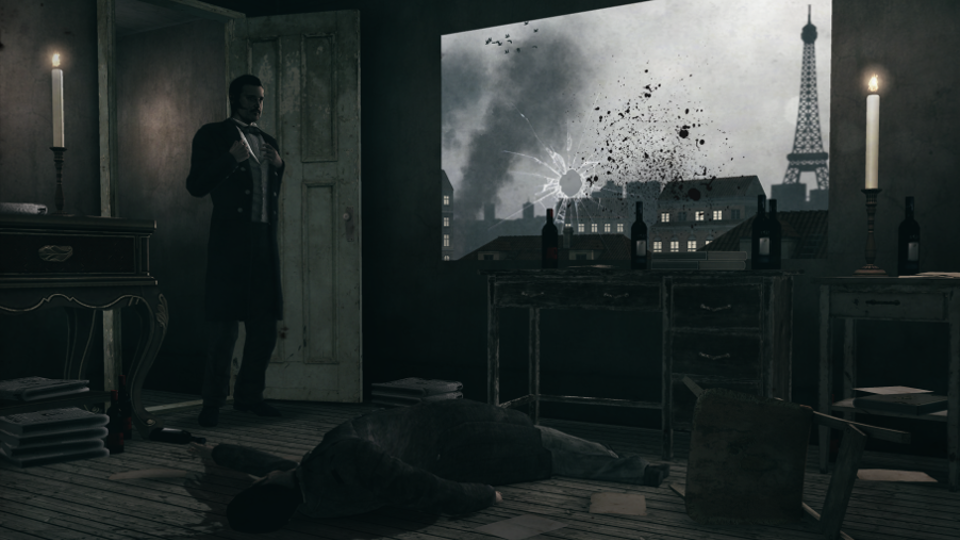 It’s the early 1900’s and there have been a series of brutal murders around Paris. Are these random acts of violence or is there a larger conspiracy at play?

Armed with your trusty notebook and a prototype camera it’s your job to help investigate the different crime scenes around the city. The action is viewed from a first person perspective and the game plays a bit like a point-and-click adventure.

The default controls have you swiping to look while tapping to move around. We found these defaults to be a little sluggish but upping the sensitivity improved things a great deal. There are also other control options such as using tilt to look around but the default seemed to be the best of the bunch.

Each case is split up into a series of distinct parts and you must follow the same procedure in order to solve the crimes. You start each case at police headquarters before heading out to the crime scenes.

Upon arriving at a crime scene you must look around for clues and evidence which might help determine what has happened. It’s important to look at the body and search around for weapons, footprints and indications of what has gone on such as damage to the environment.

When you spot an item of interest you need to move close to it and when in a good position a camera icon appears. Tapping this icon takes a photo so that you can review it later. Should you get stuck finding the evidence you can ask your partner Max for hints.

To progress you need to find all the pieces of evidence at the crime scene. The game lets you know once all evidence has been identified. Then it’s back to the office to look over the images that you have captured.

When looking at the photographs they have already been annotated to highlight the important features. To gain knowledge from them you simply have to tap each annotation. Once you have tapped on each it’s time to move on.

Next you get to read statements from any witnesses that were present at the time of the crimes. Your job is to pick out important facts from each statement. This is done by tapping on the words and the game only lets you tap those that are correct. We found selecting the correct words to be easy but if you’re struggling you can just tap all over the screen without penalty.

Finally you get to look at the suspects before using the information you have gained to identify the culprit. Here you can compare the notes you have made with each suspect. Once you have chosen you are told whether you are correct or not. If you fail then the game just lets you choose another.

There’s some interesting ideas in Criminel but there just isn’t enough to do and we got through the game in around an hour. After a promising start it all becomes quite repetitive. The crime scenes do get a bit larger but there is little effort required to find the evidence. The game is also very linear with little difficulty to speak of. There are no consequences for incorrect actions and the game waits for you to find everything before you can progress.

A feature we enjoyed is the corridors you have to walk down between each section. These serve as a way to get the story across to you. There’s an almost intimidating atmosphere as you walk down them and we liked the way elements from the story are placed. At the end of these corridors you always walk through a picture frame into the next area which is a neat touch.

Graphically the game looks rather good for a mobile game. There’s a nice grainy filter over the action which adds a lot to the setting. The characters are the standout feature with some lovely realistic faces and creepy darting eyes. Sadly there is no voicework during dialogue which could have brought a lot to the game.

Overall we enjoyed our time with Criminel but felt the experience was too brief. The game gives you very little freedom and it would have been nice to face some tougher challenges. However the developer has created a nice solid platform they could maybe build on for future games. If you fancy yourself as a bit of a Sherlock Holmes then Criminel is worth a look.