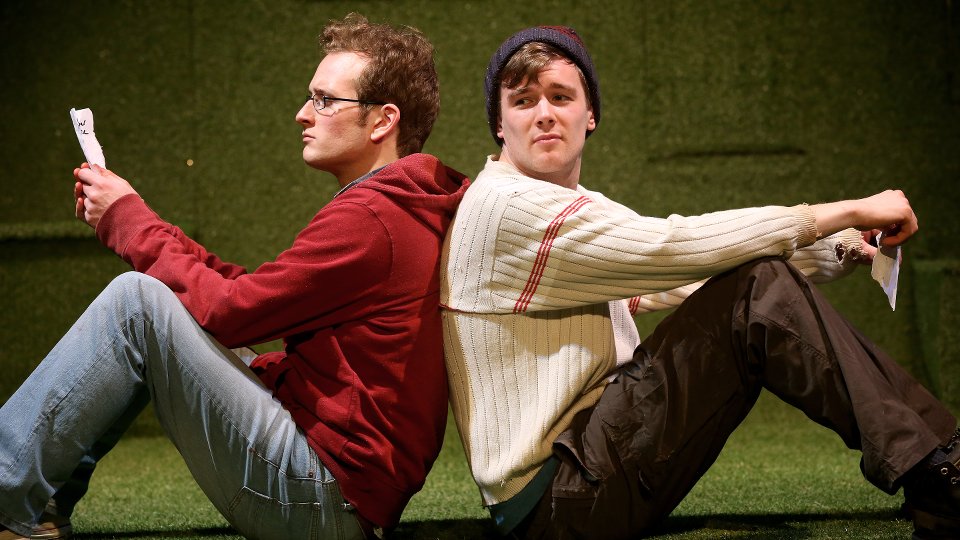 Using the relationship between two friends – the nerdy and highly-strung Paul (Adam Redmore) and the easy-going, gentle Snowy (Oliver Mott), and their quandary over helping a large and poorly cow – Simon Longman’s play Milked explores the predicament of young people living in the country, their feeling of remoteness to the modern world and the difficulty they face in securing a future.

Although there are weighty themes, Milked is a very funny play, with a rich mix of humour from word play and the macabre to gross out and everything in between (a bit with a marigold glove is a challenge for the squeamish). There are laugh-out-loud moments for all tastes, but Milked will strongly resonate with anyone who’s found themselves in Paul and Snowy’s predicament of suddenly growing up and having to make a living yet having no idea how to go about it. Paul’s vague idea to work in media in London, using his first class degree in history, and the increasing desperation with which he applies for jobs that all seem the same, is brilliantly tragi-comic.

Just as their lives are coming to a crucial point, Paul and Snowy discover a poorly cow whom they name Sandy. It becomes their pet project to make Sandy better, or put her out of her misery… even though some of their ideas for doing so are amusing flights of fantasy. Along the way we find out about their very different backgrounds, and how they’ve arrived at these divergent moments in their lives. The repetition of activity reveals the banality of the characters’ daily lives and their difficulty in achieving their goals (Snowy leaves many voice messages for his flighty mother; Paul works his way through hundreds of job applications), and is perhaps slightly over-played, with a few shorter scenes that run over familiar ground; but a fast pace in the direction ensures that the action never substantially drags.

Milked is superbly played by the two actors, whose banter together feels very natural, and the contrast between the two in terms of physical appearance and personality is credit to excellent casting and a high standard of performance. Redmore’s ever-increasing frustration is powerfully played, whilst Mott finds ways to show vulnerability behind a seemingly feckless and happy persona. Time in the company of Paul and Snowy is well-spent, as Redmore and Mott bring the characters vividly to life.

Ellan Parry’s design allows for a carpet of astroturf into the theatre, and the fact that, with hidden cupboards cut into the grass, it evokes the Teletubbies as much as the countryside works in the production’s comedic and slightly surreal favour.

Overall, Simon Longman’s Milked is a touching and truthful encapsulation of the difficulties facing young people from the countryside, and the continued divergence between country and city living. The issues raised by Milked are pertinent, but they are not proselytized. Instead, they develop out of well-crafted characters whom you care about from the very start. For an excellent piece of new writing that raises laughs as well as provokes thought, Milked won’t disappoint.