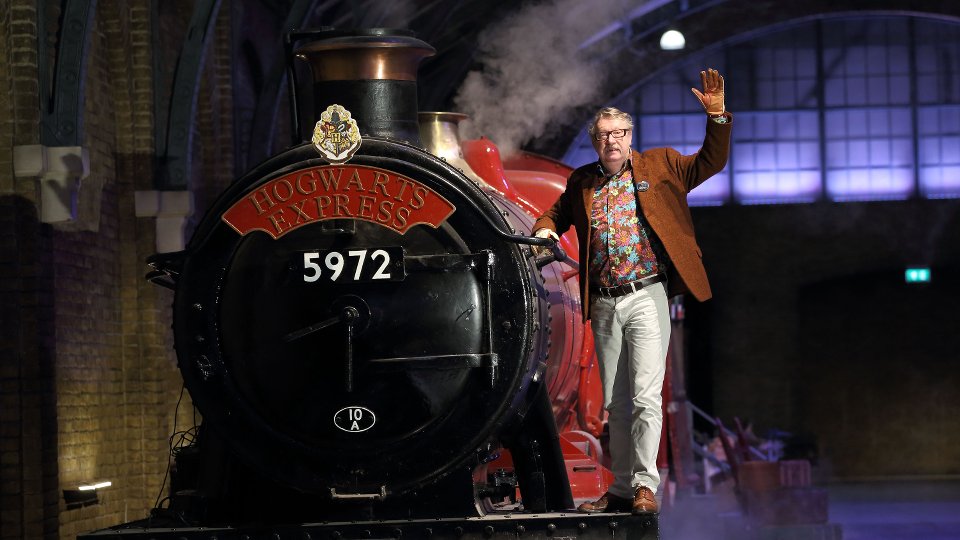 Mark Williams, who played Arthur Weasley in the Harry Potter films, has hosted a sneak peek of the original Hogwarts Express steam enging and recreation of Platform 9 ¾ at Warner Bros. Studio Tour London – The Making of Harry Potter.

The permanent expansion will open on Thursday 19th March 2015 and will house the 78-year-old red engine displayed on a realistic set of tracks with steam billowing. Visitors will have the chance to climb aboard the train’s carriage and to pose with a luggage trolley as it disappears through the platform wall.

They will be able to walk along the train’s adjoining carriage and sit in the interior carriage set that was used during filming (complete with ‘windows’ that demonstrate the process used to create iconic train scenes from the films such as the escape of Harry’s first Chocolate Frog and the Dementor attack). A selection of prop luggage will be on show and visitors can find out which character owned which items by turning an interactive dial (characters include Hermione Granger, Draco Malfoy, Luna Lovegood and more). A train-themed souvenir shop will also be open on the platform, stocking a wide range of goodies inspired by the Harry Potter films and, specifically, the Hogwarts Express.

Mark Williams commented, “I’ve really enjoyed being back at the Studio Tour, seeing the original Hogwarts Express and the superb recreation of Platform 9 ¾. People don’t always realise that the school train was in fact a real working locomotive which has been transporting passengers up and down the country since 1937. We always enjoyed filming on Platform 9 ¾; it was the beginning of every adventure. The Hogwarts Express was a magical part of the Harry Potter film series.”

The new, must-see section has been redesigned and built by many of the crew members who worked on the film series. Every inch of the platform’s glass roof, yellow brick walls and luggage racks, designed by Oscar and BAFTA winning Production Designer Stuart Craig, have been painstakingly reassembled by a team led by Construction Manager Paul Hayes and dressed by Set Decorator Rosie Goodwin. Oscar and BAFTA winning Special Effects Supervisor John Richardson rigged the locomotive with special effects steam.

The new Platform 9 ¾ section, featuring the original Hogwarts Express, will open on Thursday 19th March and entrance will be included in the standard ticket price. Take a look at Mark showing off the new expansion in our gallery: