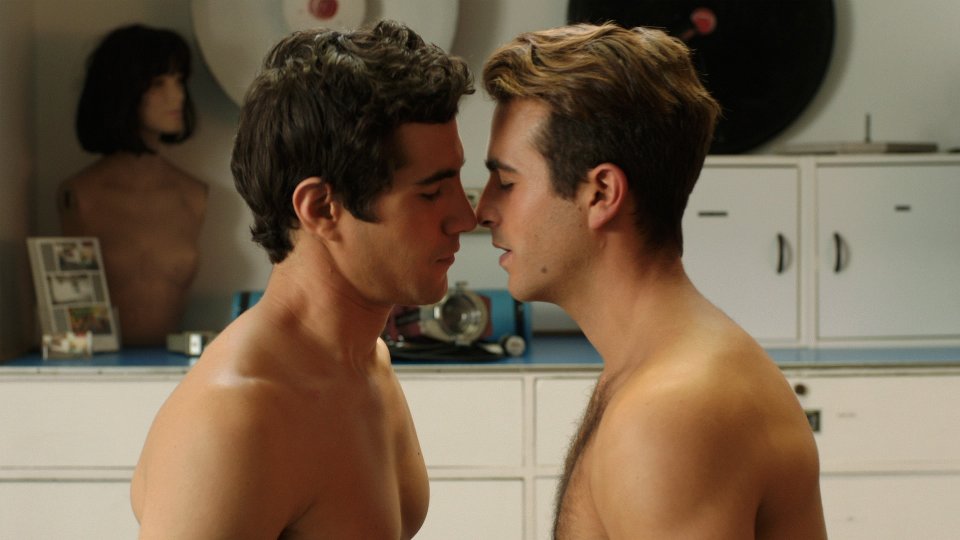 Short films can have as much impact as feature length films yet often they are overlooked. LGBT cinema is one genre where short films thrive and there are plenty of them to sink your teeth into. Peccadillo Pictures regularly release new volumes of their Boys on Film short film collections and now TLA Releasing are getting in on the act with the release of Global Warming.

Global Warming collects together four short films – You Can’t Curry Love (2009), Daddy’s Big Girl (2008), Foreign Relations (2014) and Performance Anxiety (2012) – exploring a variety of themes and situations. All of the films are directed by and written or co-written by Reid Waterer.

The collection opens with You Can’t Curry Love, which tells the story of Vikas (Ashwin Gore), a young Asian man living in the UK who is sent to India for work. During his visit he meets handsome hotel clerk Sunil (Rakshak Sahni) and he begins to learn more about a country he thought he knew. The acting in this short isn’t all that great and it had us reaching for the stop button but we’re glad we stuck with it as the other three films in the collection are much better.

Foreign Relations is the strongest of the four short films here. Shy Tom (Kevin Grant Spencer) is assigned Greek roommate Nikos (Anthem Moss) during a group Mediterranean trip. As the two get to know one another Tom starts to fall for Nikos but he has no idea if his new friend is gay or straight. What makes this short stand out is that it features strong performances and a genuinely quite lovely story. Kevin Grant Spencer is perfectly cast as Tom and you find yourself rooting for him throughout as he tries to figure out if Nikos bats for the same team.

The other two films on this release are Daddy’s Big Girl, about a girl (Rakefet Abergel) who tries to reconcile with her estranged man-hungry father (Christopher Bradley), and Performance Anxiety, about two straight actors who prepare to perform a gay sex scene for a movie. Both shorts are entertaining with Daddy’s Big Girl giving the collection an emotional punch and Performance Anxiety provide plenty of titillation.

In terms of the performances for the most part they are really strong. Danny Lopes and Lawrence Nicols are very entertaining in Performance Anxiety as their characters Jacob and Duke constantly assert their straightness as they learn to become intimate with one another for the cameras. Adam Huss, who appears in Foreign Relations and Daddy’s Big Girl, brings his impeccable comedic timing (and pecs) to both shorts and is one of the standout performers here.

Global Warming is an entertaining and enjoyable collection of short films. It’s a shame that the first of the shorts isn’t on par with the other three otherwise it would have been a solid 81 minutes of gay cinema. Despite not loving You Can’t Hurry Love, we did love the other three shorts and Reid Waterer is clearly a very talented writer and director.

Watch the trailer for Global Warming below: