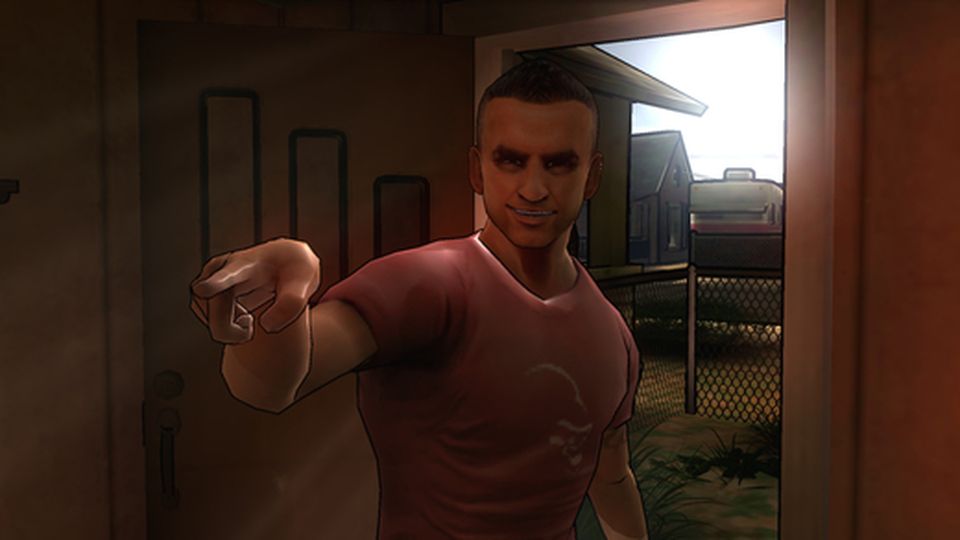 We get through a lot of TV here at EF but sadly one show we haven’t got around to watching yet is Sons of Anarchy. Having just aired the seventh and final season now is probably a perfect time to make the jump to video games. The Prospect attempts to do just that and while it’s likely to appeal most to fans of the show you don’t need to have seen it to make sense of the game.

If you’ve played any of the adventure games by Telltale Games then you’ll have an idea of what to expect here. The Prospect is an interactive narrative adventure game where your decisions influence the story.

After a brief flash forward which serves as a quick tutorial the game jumps back in time. You get to pay the role of a chap named Clint who happens to be a bit of a genius when it comes to fixing bikes. You’re unemployed and stuck at home looking after your terminally ill dad and are just weeks away from going off to college.

At least that’s what your dad thinks having saved up the cash to pay for your education. What your dad doesn’t know is that you’ve been dipping into the cash in order to pay for rent and bills. Your brother Duke is a member of the Sons of Anarchy motorcycle club.

The game is short and really doesn’t give you long enough to get into the story. Much of what happens seems aimed at teaching you the basics. You get some simple tasks to do such as finding and fetching items. There’s some QTE fight sections, plenty of decisions to be made and even a creepy back massage to perform.

Getting through most of the episode is quite straightforward and your decisions don’t seem to have that much of an impact. We presume that over the course of the planned 10-part series that they will carry more weight. The decisions you make during conversations show how they positively or negatively affect your relationship with a character.

Like the TV show the game is aimed at a more mature audience and carries a 17+ rating. There’s plenty of over the top swearing as well as violence, drug use and sex references. If you’re easily offended then it’s probably not the best game for you.

Fans of the show may be disappointed that most of the cast of characters for this episode are new. We don’t know if that will change later on but there is an appearance by Alex ‘Tig’ Trager which is sure to please.

There are some sections of this episode that give you control of a motorbike. Sadly these are some of the worst parts of the game. You control the bike with a single finger swiping left and right to turn and moving up and down the screen for speed. It takes a lot of practice to get right and even then it’s hard to control it well. Getting through these sections takes many retries and to prevent frustration the developers have even included the option to skip them.

Graphically we found The Prospect looks rather nice for a mobile game. It uses a realistic cell shaded aesthetic that reminds of Borderlands. It’s probably not for everyone though and the use of bloom in particular can be a bit over the top.

Towards the end of the episode things start to pick up which hopefully bodes well for future episodes. It might have been better to aim for less episodes that were longer in length but only time will tell.

The first episode of Sons of Anarchy: The Prospect is now available worldwide on the App Store for iPhone and iPad for £1.49. The next instalment in a series of ten planned episodes – as well as separate releases for PC, Mac and Android – will arrive later this year. A season pass is also available at a cost of £10.99.