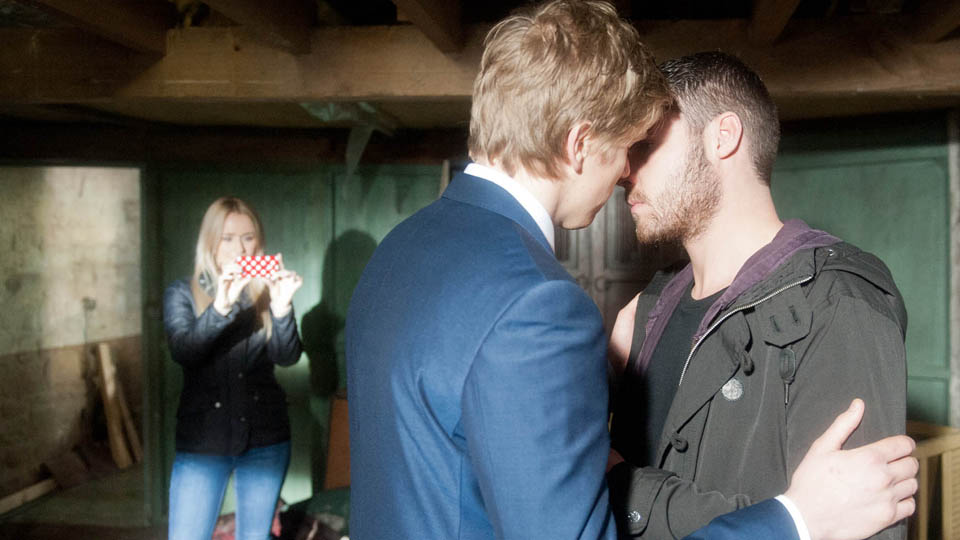 It’s going to be an explosive week in Emmerdale as Robert prepares to marry Chrissie, but can Katie spoil it all?

Andy is still peeved at Katie as they load the car with boxes to move into the caravan.  He even goes as far as to apologise to Robert for her behaviour, which surprises Robert who has his own surprise in store for Andy; he asks Andy to be his best man at his wedding to Chrissie this week!

Later in the pub, Katie can’t resist goading Robert that her and Chrissie are going to be bezzie mates and he has an angry glint as he leaves the pub.  Soon after, Andy and Katie find their caravan ablaze – surely Robert wouldn’t stoop that low would he?

Katie barges into Home Farm and refuses to leave til Robert admits he started the fire.  Chrissie challenges her to ring the police, but her confidence wanes and she ends up worrying she may have ruined her own relationship with Andy, who is fuming.  It gets worse when Robert persuades Chrissie to revoke the sale of Wylie’s Farm causing Andy to seriously question their relationship.

Meanwhile, Aaron makes a confession to Paddy, who advises him to get out of it before he gets hurt, so he ends things with an unhappy Robert.  Later, Robert tries to get Aaron to meet him in the barn and realises that Aaron isn’t going to turn up.  He later spies him in the pub and follows him into the toilets where his words leave Aaron gutted and hurt.  Soon after, Aaron sees Katie and tells her she’s been right all along about Robert having an affair and he will prove it to her the very next day – Robert’s wedding day!

As that day arrives, Robert agrees to meet Aaron at Wylie’s Farm for one last goodbye.  Aaron implores him to call off the wedding, telling him he loves him, but Robert refuses and makes to leave.  Aaron quickly texts Katie to get her to  Wylie’s Farm and then sets off after Robert.  It’s not long before the pair are embroiled in a passionate kiss and Katie arrives in time to take a photo on her phone.  She finally has the evidence she has been looking for.

Robert desperately tries to discredit Aaron and dissuade Katie from making it public knowledge.  The tension mounts as all three realise what the stakes are and the repercussions they could have.  Meanwhile, Chrissie arrives at the church, but there is no sign of the groom.  Will the wedding go ahead?

Ross demands the truth from Pete about what Emma did

When DC Halton arrives to talk to Ross about his fingerprints being found in connection with a break in, it’s Emma that comes to his rescue explaining that it was her house and she is his mother.  It does make her question why they’d have his prints and he’s soon forced to confess to her what he did, leaving him to worry that she’ll disappear from his life again.

Finn fills Pete in on the situation, determined to convince him to change his opinion of Emma before she leaves them again.  Ross takes a more aggressive stance, pinning Pete against the bar and demanding that he tell them why he is so anti-Emma.

Ross is left stunned by what he’s told and goes to see Emma, who doesn’t deny it, but tries to explain.  Can Ross forgive her?

Marlon refuses to lie when Laurel suggest they can have a drink and not tell Paddy, but later when Doug offers her a sneaky drink will she cave in?

Tracy is moved when Val wants to discuss plans to make sure her and Sam stay together.

While babysitting, Lachlan picks up a knife and examines it.  Deep in thought he runs the blade against his thumb bracing himself.

Leyla is shocked to learn Katie is selling the house to Rodney and Georgia, but Rodney’s not sure about the move and does a sly deal.

Chrissie’s sister can’t make the wedding so she asks Alicia to step in as a bridesmaid.