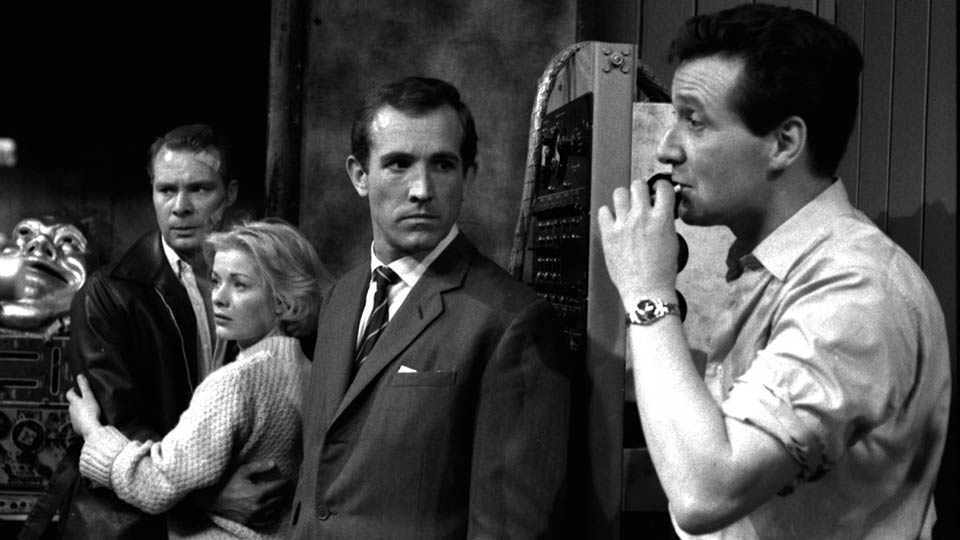 Ian Hendry died thirty years ago this Christmas. It’s shocking to contemplate, since he was one of the major British TV and film stars of the 60s and 70s, and his iconic roles still captivate audiences to this day. Yet behind the chameleonic performances of the charismatic actor lay a troubled and deeply contradictory personality. Gabriel Hershman’s thoroughly-researched biography brings the reader closer to the man behind the characters, and provides an affectionate and often sad account of why Ian Hendry’s star didn’t shine as brightly as perhaps it should have done.

The name of the biography comes from what would have been Hendry’s own autobiographical account of his life, aptly describing his time in the profession, as well as his personal life, as being like a yo yo, full of ups and downs. Send in the Clowns, one of Hendry’s favourite songs, played at his funeral and related to his little-known love of clowning. If you’re only aware of Hendry as an actor, this biography reveals his passions for clowning and writing too. Later chapters on his collaboration with musician Bob Ponton reveal a multi-faceted artist.

Most readers when they think of Ian Hendry will probably think of one of two things. They may think of him as the first hero of The Avengers, when Patrick Macnee’s John Steed was relegated to supporting player status. In the early 1960s, Ian Hendry had the world at his feet, and a starring part in the series The Avengers was one of many roles. Sadly, most of his episodes no longer exist, and few people now remember his association with the show that is synonymous with Steed’s umbrella, bowler hat, and sexy sidekick. Alternatively, readers may think of Hendry’s superb supporting villainy in the cult classic British gangster movie Get Carter. He’s the one with eyes, as Michael Caine’s character memorably tells us, like pissholes in the snow.

Hershman’s chapters on The Avengers and Get Carter will be the main selling points of the book, and he is thoroughly detailed narrating both. For the cult TV show, Hershman paints an informative picture of British television of the era, drawing a distinction between the ambitions of Patrick Macnee, for regular employment, against Ian Hendry, who eschewed commitment to a show for fresh challenges. By the time of Get Carter, Hendry was already in the grip of the alcoholism that would cut short his life, and Hershman’s account of Hendry’s time on the film is eye-poppingly shocking, from his animosity and bitter jealousy towards star Michael Caine, to his inebriation whilst filming.

Hershman starts his account of Hendry’s life stating that he hoped to avoid dwelling on the part alcohol played, but this proves impossible, since drink was the major driving force of Hendry’s life, and a demon he was doomed to lose his battle against. Knowing of Hendry’s premature demise, and successful acting career that could have amounted to so much more, The Yo Yo Life of Ian Hendry is often a sad read, but never anything less than compulsive. Hershman paints an affectionate portrait of Hendry’s last two marriages, to Janet Munro, whom he never stopped loving, and to Sandra Jones, a good few years his junior. The chapter on Hendry and Munro’s domesticity on Pharaoh’s Island (which Janet later dubbed ‘Devil’s Island’) leaves the reader wondering how so much early promise could go so wrong: yet every step in the downward spiral is accounted for.

Hendry emerges from the pages of this engrossing biography as something of a contradiction. He forged a reputation as a hard man, playing crooks and villains: yet all the while he insisted the key to his acting was allowing the audience to see his vulnerability, long before such a character trait was considered compatible with masculinity. Always honest and outspoken, Hendry was frequently politically incorrect by today’s standards, yet an enduring friendship was with the gay actor Harry Andrews.

Although the subject of the biography, some three decades after his death, remains difficult to pin down, author Gabriel Hershman has achieved an excellent feat in presenting the fifty-three years of Hendry’s life in a succinct and intriguing format. Quotations from people who knew Hendry, from fellow alcoholic the late Ronald Fraser (and there are some wonderful stories about him amongst these pages), to Bruce Montague, Honor Blackman and Chris Clough, make for a thorough and insightful account of Hendry’s life.

Stylistically, we found the use of capitals rather than italics at first distracting, but there is consistency, and the absence of an index is regrettable, since it’s always a useful source of ready reference. Whilst very well written on the whole, misspellings of names such as Sydney Newman draw attention to themselves. The author’s defence of his subject sometimes strays beyond the strictly objective, where Hendry – an undeniably great actor – is perhaps unfairly described as a bigger talent than those of his contemporaries who would come to dwarf him, especially Michael Caine, who, besides his ‘gracious’ response to Hendry’s animosity on Get Carter, is the recipient of some arguably unearned criticism.

A few moments straying from strict objectivity are forgiveable. We applaud the fact that Ian Hendry finally has a biography worthy of his talent and his considerable contribution to British TV and film. Anyone interested in cult TV of the 60s and 70s, and especially the making of major British films such as The Hill and Get Carter, will thoroughly enjoy this book. It’s often sad, but always emotionally engaging, and full of insights about a fascinating period of British screen entertainment, and one of the major, if troubled stars, who continues to entrance audiences to this day.

Send in the Clowns: The Yo Yo Life of Ian Hendry is published by Lulu.com.

In this article:British Actors, Gabriel Hershman, Get Carter, Ian Hendry, Michael Caine, Send in the Clowns, The Avengers, The Yo Yo Life of Ian Hendry