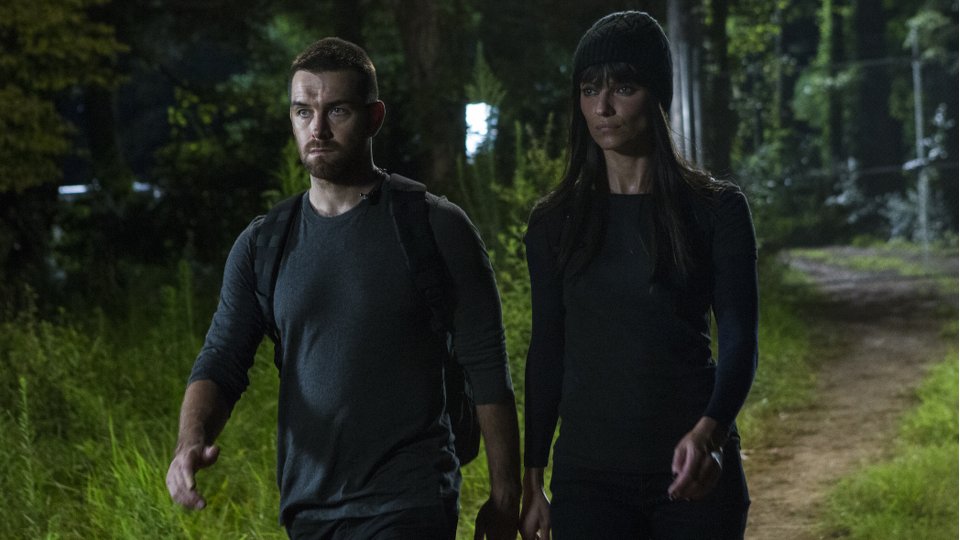 The season two finale of Banshee set up plenty of storylines for its third season and brought closure to an arc that has been building since season 1.

If you haven’t seen the second season finale of Banshee and don’t want any spoilers we suggest you stop reading now. If you do want to relive the action then keep reading.

Banshee was at its absolute best tonight as it revealed the backstory of Lucas (Antony Starr) and Ana’s (Ivana Milicevic) ongoing battle with Rabbit (Ben Cross). The last episode saw Lucas and Ana arrive in New York ready to put an end to Rabbit once and for all but they got a little side-tracked saving Job (Hoon Lee).

Let’s start with that backstory. We knew that there was no love lost between Rabbit and Lucas and now we are left crystal clear about why. Not only did Lucas attempt to screw over Rabbit but he took his daughter Ana away from his too. Ok she didn’t need too much persuading but still it’s gotta sting right? The two lovers decided to take on Rabbit’s latest mission but do a runner with the swag.

The backstory saw explained how Ana came to meet Job and who didn’t love that feisty drag cabaret scene where Job schooled a bunch of straight men? Absolutely classic. Job was the guy who gave Lucas and Ana new identities aiding them in escaping from Rabbit once and for all.

Unfortunately for the lovers, their new-found happiness was to be short-lived with Rabbit discovering what they were up to and calling the FBI on them. Lucas managed to help Ana get away but he was captured and put in prison. That about takes us to where Banshee season 1 started right? Well almost. We also saw Ana reveal to her father that she was pregnant with Lucas’ child.

In the present day Lucas appealed to old friend Fat Au (Eddie Cooper) to help him and Ana get their gun store in order, and boy did they get plenty of guns! Then the two headed for the church where Rabbit was hiding out with his brother (Julian Sands) and they opened fire. A close call saw Lucas and Ana hiding behind a pillar looking likely to lose but Job and Fat Au arrived in the nick of time armed with more guns than anyone could ever need. They took out everyone in the church clearing the way for Lucas and Ana to find Rabbit.

They found their nemesis sat on a bench outside and after a brief discussion, Ana handed Rabbit a gun to kill himself. As she walked away Lucas shared some tense last words with him before Rabbit blew his head off.

Just when we thought we weren’t going to see anyone else in the episode, we saw pretty much every character. Rebecca (Lili Simmons) used her sexual prowess to murder Alex Longshadow (Anthony Ruivivar) and then boasted to her recently released from prison Uncle Kai (Ulrich Thomsen). The naked scene that then unfolded before our eyes was absolutely too much to write about in this recap.

Elsewhere Emmett (Demetrius Grosse) and his wife were leaving Banshee to start a new life and got gunned down by Hondo (Tyson Sullivan), one of the racists that he beat almost to death. Lucas paid a visit to Deputy Siobhan (Trieste Kelly Dunn) and had an emotional moment telling her he needed to see her. Following that Deva (Ryann Shane) arrived at the police station and revealed that she knows Lucas is her father.

Ana returned home to Gordon (Rus Blackwell) and confirmed that Rabbit is dead. Can they actually live a peaceful live? We highly doubt it.

Lastly after the credits rolled news travelled fast about Alex’s death and Chayton Littlestone (Geno Segers) looked to be heading back to Banshee after he found out shortly after snapping a man’s neck in an underground fight club.