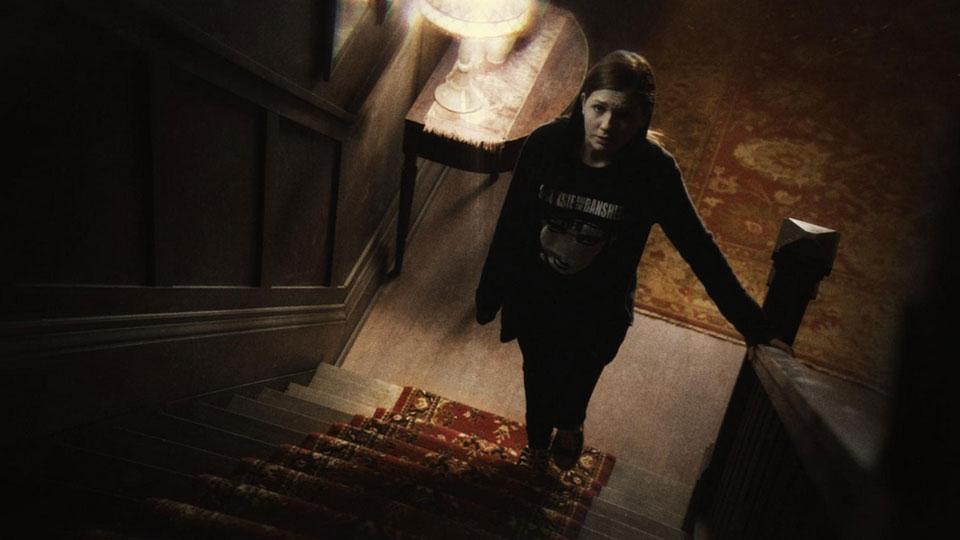 Lisa (Abigail Breslin) knows that she and her family are dead but she can’t seem to open their eyes to that fact. Each day the family live out the last day of their lives, the day before Lisa’s 16th birthday, with little variation and simply go through the motions before waking up and doing it all over again. Lisa soon grows tired of the daily routine and starts to question why the family is stuck in a never-ending cycle. When she begins to hear voices in the house, Lisa suspects that there’s a mystery to be uncovered that could break the endless cycle and finally give her family the peace she craves.

Haunter starts out as an incredibly intense and intriguing movie. The first 30 minutes are so are superb teasing plenty but giving very little in the way of answers. As our hopes began to raise the movie soon shows its hand and unfortunately the pay-off doesn’t add up to the sum of its parts. The film transforms from an atmospheric and spooky ghost story into a run-of-the-mill serial killer drama of the likes we’ve seen time and time again.

Due to the nature of the storyline, it’s inevitable that there is going to be repetition throughout the movie but Haunter really hammers you over the head with it. Once the repetition begins to break the logic of the film is thrown firmly out of the window leaving you scratching your head. There’s no particular rhyme or reason that Lisa does most of the things she does other than to advance the plot and drive you to the conclusion it is so desperate to reveal.

Eventually we just went with the story but still we couldn’t find a great deal to enjoy. The pacing is plodding, the supernatural threat – once revealed – proves disappointing and the end is just a bit rubbish if we’re honest.

Abigail Breslin, best-known for her breakthrough role in Little Miss Sunshine, carries the weight of the film on her shoulders. Her performance is strong and we’d place bets that in the years to come Breslin will be one of the best actresses of her generation. The magic we saw in Little Miss Sunshine is present here but unfortunately the material isn’t as good as she is.

Haunter is sadly a real disappointment. Our hopes were really high but we felt let-down by the time the credits rolled. This could have been a truly frightening and fantastic film but it’s a damp squib that feels over-long and dare we say gets a bit boring? If it wasn’t for the performance of Breslin we’re not actually sure we would have seen the film through to the end. Haunter is a good idea that is executed poorly and with little attention to common sense and logic. Mark this one down as a missed opportunity.

Advertisement. Scroll to continue reading.
In this article:Abigail Breslin, Haunter