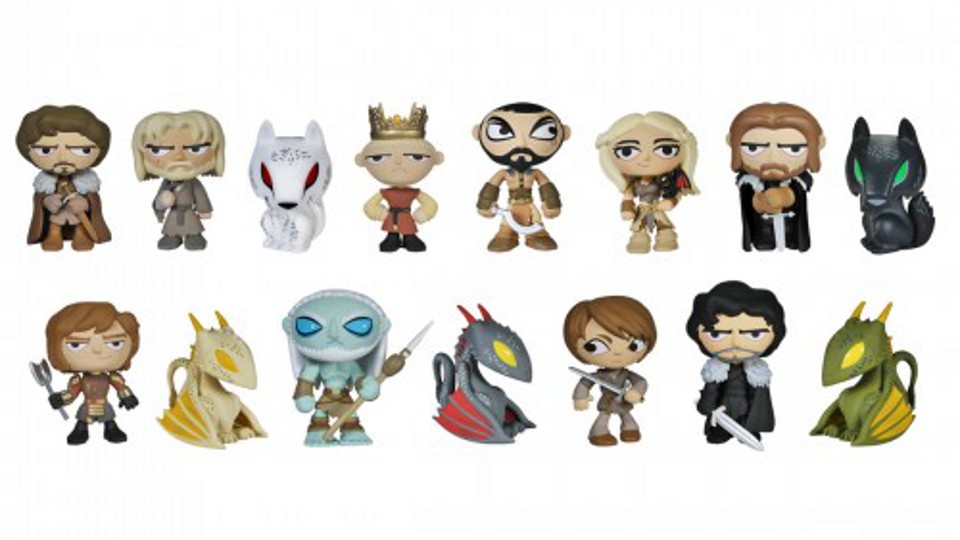 It’s only been a couple of weeks since Game of Thrones Season 4 finished but we’re already missing the show and looking forward to Season 5. To keep us entertained while we wait we’ve just discovered that Funko have released the first edition of their Game of Thrones Mystery Minis.

Mystery Minis are small collectible vinyl figures that stand around 3-inches high.  The first edition of the Game of Thrones Mystery Minis features 16 popular characters from the hit HBO TV show. There’s a nice variety of characters including Tyrion Lannister, Jon Snow, Daenerys Targaryen, Arya Stark and Joffrey Baratheon. There are also Direwolves, Dragons and even a White Walker that glows!

The figures are bought individually but you never know which you will get as they are sold blind. Only once you open up the box and tear open the black plastic bag will you discover which you have purchased. The majority of the figures are fairly common but a few are far rarer.

Obtaining a full set will take time and dedication but once you start collecting it’s hard to not want them all. Buying a lot soon gets expensive at a cost of £8.99 each and completing your collection will be impossible without lots of duplicates. If you have friends collecting them then it will be possible to trade but eBay looks like a good option where you can buy just the ones you need. The rare figures like Jaime Lannister and Drogon are likely to set you back around £50 each.

In our first blind box we found Arya Stark brandishing Needle. The detail on each figure is truly impressive and each of the different characters is instantly recognisable. There are neat little touches that help bring out the personality of each character too such as Joffrey’s frown, Tyrion’s axe and Dany’s baby dragon.

The Game of Thrones Mystery Minis can be bought online now via the HBO Shop.