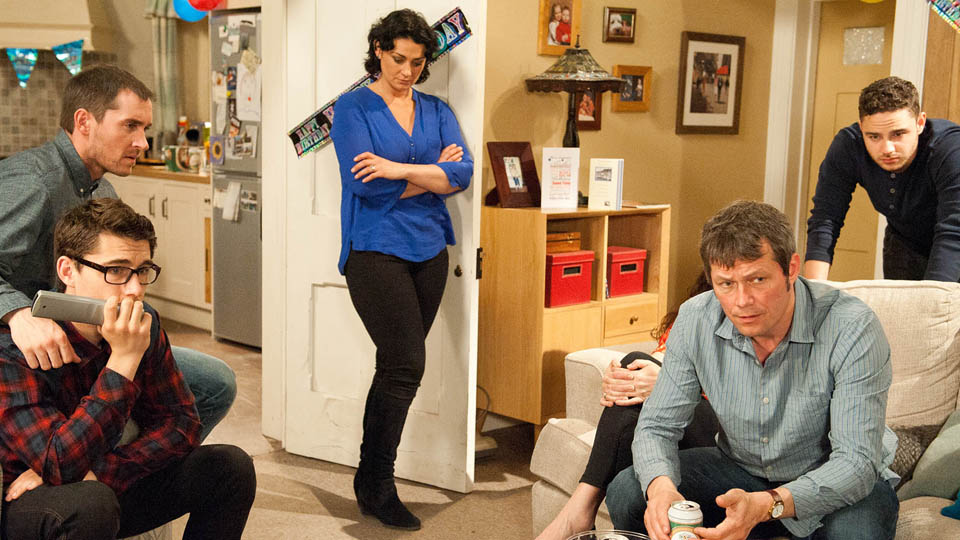 With the World Cup on Emmerdale was reduced to 4 episodes over two days rather than the usual 6 but boy did they pack a lot in.  Here’s our weekly catch up in case you missed it plus a sneak peak at the week ahead.

After digging through some boxes of his dad’s, Finn stumbles across some old home videos and decides, with Victoria, that it will be fun to show them at his birthday party at the farm.  Of course what they didn’t do was watch the tape to the end where the whole Barton clan hear James and his then wife, Emma, arguing and the line ‘but you knew the way to Moira’s bed!’.  Pandora’s box is well and truly opened and the fallout is colossal.

Adam punches James and says some hurtful things to Moira before stomping off.  When Moira later breaks it to him that James is his father too he really loses it, heading to the Dingles to borrow their shotgun and it looks like his new daddy is in his sights.

Cain can’t believe that Moira lied to him when he asked her before their wedding if anything had happened with James, but puts his feelings to one side long enough to talk Adam down and retrieve the shotgun.  Grateful for the friend, Adam tells Cain that he should leave Moira and that she can’t be trusted and it must’ve got in his head because he packs his bags and walks out on a devastated Moira;  She’s lost her son and her husband on the same day.

James’ sons are disgusted with him and start to blame him for their mother deserting them all those years back.  Finn even starts secretly trying to find his mum.  Ross loses his rag with James in the pub and as well as trying to punch him, reveals to the whole pub that James is Adam’s dad.  He then finds comfort in the arms of Donna who goes to comfort him after the incident but can she commit to any kind of relationship with only months to live?

Jai has a big decision to make – should he choose Megan or Leyla as his new investor in the factory?  Megan claims she won’t try to interfere with the way he runs things but already has shown that she can’t help herself.  Leyla is looking to invest here recent windfall and is fed up with Megan’s snooty remarks, so she challenges her to a business duel.  Sir Alan would be proud!

The ladies have two hours to turn £40 into as much cash as they can.  Leyla decides to sell burgers to cyclists on a race route that she sneakily reroutes through the village and uses her previous career’s outfits to capture the racers attention – no not her shop apron but her exotic dancer outfits!

Megan looks on smugly as she reveals she’s got Jai a deal worth £5k but the smile is soon wiped off her face as Jai tells her that he will be choosing Leyla as she won’t be trying to take over.

Sean is down in the dumps and missing Belle but is cheered up when Dan asks him to be his best man at upcoming marriage to Kerry.

Bernice is feeling old and worried that Andy won’t want her.

Adam is going further off the rails and in a drunken state gets into the tractor not realising that Andy is rethreading the baler.  Moments later Andy lets out a howl due to the intense pain. What has Adam done?

Cain has gone AWOL leaving Chas and Debbie to hunt him down.

Sam is acting suspiciously and it turns out he’s been seeing a girl.