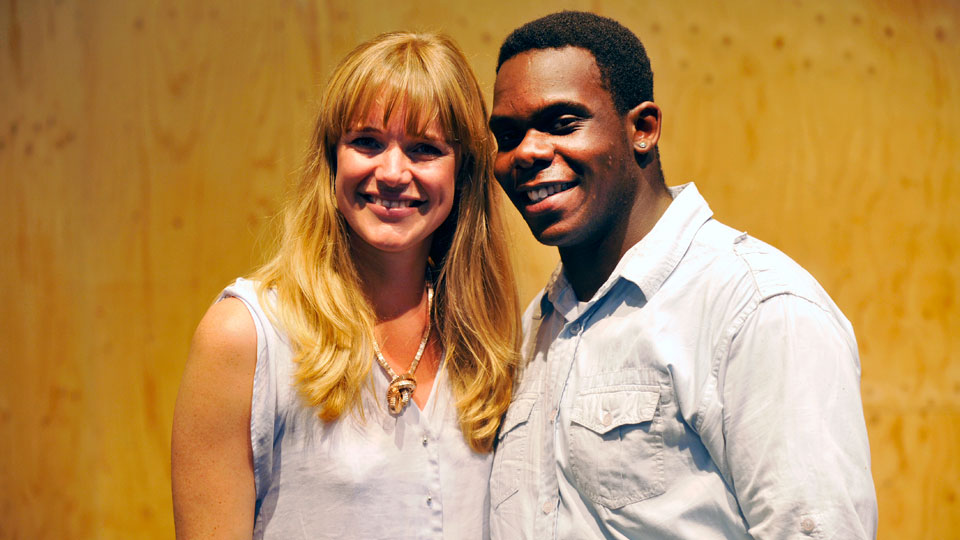 We were invited along to the Young Vic yesterday to witness the announcement of the JMK Young Director Award 2014. Amongst the nominees in attendance were Sir Ian McKellen, and one of the trustees of the JMK Trust, Clare Menzies-Kitchin MBE.

The JMK award grants £25,000 to the winning director to help them stage their own production, as well as £2,000 to the runner-up. The JMK Trust was set up to commemorate the visionary young director James Menzies-Kitchin, whose career was cut tragically short by his sudden death at the age of 28 in 1996. The award combines prestige with the practical benefits of a production budget, rehearsal, production experience and the opportunity to stage the work at the Young Vic.

This year’s winner is Kate Hewitt, who will stage Caryl Churchill’s Far Away at the Young Vic from 7th – 29th November. When she wasn’t speaking to Sir Ian and the theatre dignitaries, we grabbed a few minutes with her to ask for her reaction. “Thrilling, exciting and hopeful!” Kate told us, trying to summarise how winning the award made her feel. But what made her decide on Caryl Churchill’s Far Away? “I’m a fan of Churchill’s,” Kate explained. “The opening act, which is one scene, is riveting. She ratchets tension line by line. It hooks you in. The more I read it the more I found in it. It’s about a woman we follow from childhood into adulthood. You meet her as a young girl in act one, who is an art graduate in act two, and then act three is set in an apocalyptic world. Churchill takes you through a naturalistic, highly dramatic opening scene, and then moves to a surreal place by the end. The themes and the meaning in it feel pertinent to me.” We ask what Kate is most looking forward to about directing Far Away. “I can talk about it and hypothesise about the meaning, and come up with the design which has been incredibly important, and which I love doing: but actually being in the room and working with the text is the most important thing for me. It’s so live and in the moment between the characters that all we have to do is make the performances brilliant. The reality of the characters’s situations, and discovering that with the actors, is what I love the most: getting them in the room!”

Far Away by Caryl Churchill, which will be directed at the Young Vic by Kate Hewitt, was originally produced at the Royal Court Theatre Upstairs in 2000. On hearing of the revival of the play, Caryl Churchill said: “The JMK award seems to lead to good productions by young directors. I’ve enjoyed Thea Sharrock’s Top Girls and Caroline Steinbeis’ Mad Forest and look forward to seeing Kate Hewitt’s Far Away.”

Tickets will go on sale at The Young Vic Box Office from Wednesday 18th June at 10am and are available by calling 020 7922 2922 or booking online at www.youngvic.org.

We also caught up with the runner-up of the JMK Young Director Award, Roy Alexander Weise, who won for his staging of The Ugly One by Marius von Mayenburg. Roy is to direct The Man in the Green Jacket by Eliot Moleba at Jermyn Street Theatre on July 8th and 10th as part of their season on South Africa. We put the same question to him to hear his reaction to being announced as the runner-up. “Really ecstatic,” Roy told us. “I’ve never worked so hard on anything. It’s great to be put up amongst these other directors who are in such brilliant positions in their careers and producing great work. It’s great to be acknowledged by the trustees and the panel for JMK.” We asked him what attracted him to direct The Man in the Green Jacket. “I’m really interested in politics as an artist, and equality and injustice. I’m always looking for ways in which theatre and art can address these things. I was approached by Anthony Biggs who runs the Jermyn Street Theatre and asked if I knew of any playwrights. Rob Drummer of the Bush Theatre, where I’m working at the moment, put me in touch with Eliot Moleba. I read The Man in the Green Jacket and I liked it – it’s a really important topic about a miners’ strike in South Africa that was virtually unreported by the rest of the world a few years ago. The season as a whole is about South Africa over one hundred years.”

You can find out more about the South Africa Season on the Jermyn Street Theatre website.

Kate Hewitt and Roy Alexander Weise are pictured together on our feature image.

You can find out more about the JMK Trust on their website, www.jmktrust.org, and the Young Vic at www.youngvic.org.