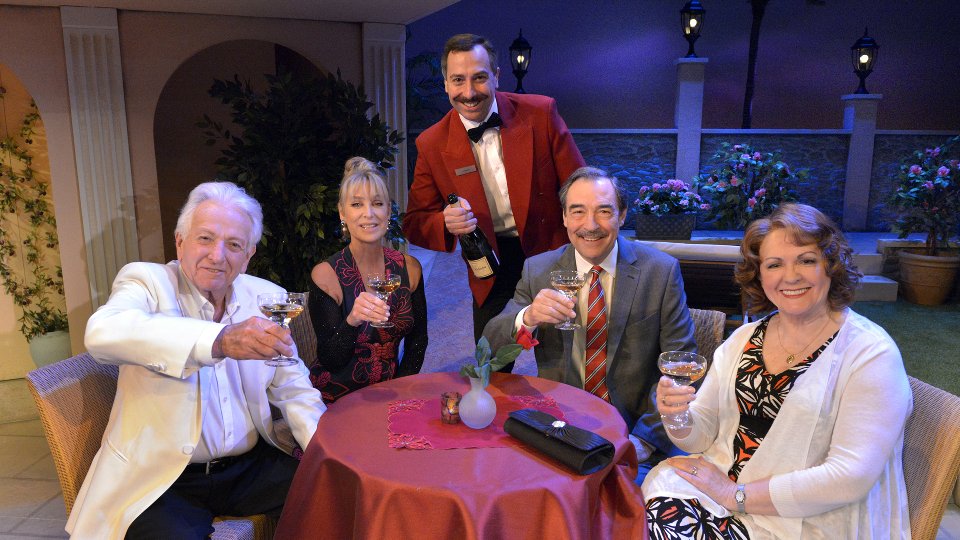 Last of the Duty Free, currently doing the rounds with a UK tour, is based on the classic TV sitcom Duty Free, which aired in the mid 1980s. It reunites three out of the four principal actors, and brings audiences up to date with the shenanigans of the two married couples and the abortive affair between David (Keith Barron) and Linda (Carol Royle). Almost thirty years later, David and Linda arrange to meet at the very same Spanish hotel where their previous dalliance took place (recreated with excellent design by Julie Godfrey and Douglas Kuhrt). Both have managed to slip away from the lead weights of their respective spouses – or have they?

It is by no means necessary to be familiar with the sitcom to enjoy Last of the Duty Free – however the play will undeniably resonate to the greatest extent with middle-aged and upwards audiences – who will remember the series. We say that because the humour is the same, and the plot revolving around a final fling for a late middle-aged man, and the difficulty of sustaining a long marriage, will find most empathy amongst people of a certain age.

What emerges is a pretty decent farce, with all the requisite ingredients of mistaken identity, misunderstandings and coincidences firmly in place. It should be no surprise that Last of the Duty Free is a solid play, since it’s from the pen of Eric Chappell, who has done the reverse of another of his sitcoms, Rising Damp, which started life as a stage play (The Banana Box) and then became a highly successful sitcom. Few authors write sexually-frustrated middle-aged men better than Chappell, and he provides plenty of belly-laughs at their expense. In fact, Last of the Duty Free packs in plenty of great gags and glorious one-liners.

The cast is first rate.  Keith Barron was clearly a little nervous in the opening minutes. He needn’t have been, since he has slipped seamlessly back into David Pearce’s skin. The confidence came with the laughter, and with the support of Gwen Taylor who reprised her role as Amy, his long-suffering wife. The banter between the two is a joy to watch. Also returning is the impeccable Neil Stacy as Robert, a bluff, uptight old school Tory (we suspect) who keeps on his blazer and tie even in the heat of the Mediterranean. The cast are clearly enjoying the reunion, and the warmth radiates across the proscenium arch. Taking on the role of Robert’s wife, the idealistic Linda who craves an affair with David, is Carol Royle, who seems to channel the spirit of Audrey Hepburn in scenes where she dons sunglasses to remain in cognito.

There are also good comic turns from James Barron and Maxine Gregory as nauseating newly-weds. They’re just there to turn the screw of the ever-tightening plot; but everyone’s met couples like them, and they are suitably smug, irritating and fun to watch.

The humour is good-natured. You’d have to be supremely sensitive to object to Robert’s mildly racist outburst – especially since we’re clearly not invited to sympathise with his views (the joke is to poke fun at his outdated stereotyping), and if you can expect to go to the theatre without hearing any line of dialogue you find personally distasteful, then what is theatre for? Naturally, the show generates a greater number of laughs the more ridiculous the plot becomes, rendering the second half the most successful of the two.

Since Last of the Duty Free is a farce, the show would be even better with a little running time shaved off and the pace cranked up a touch more. It takes a while for the plot to warm up, and there is some repetitious dialogue that bogs down a few scenes. Overall though, Last of the Duty Free is an enjoyable evening out, with some great jokes and a cast clearly having fun. It’s great to see them back together. Catch it whilst you can.